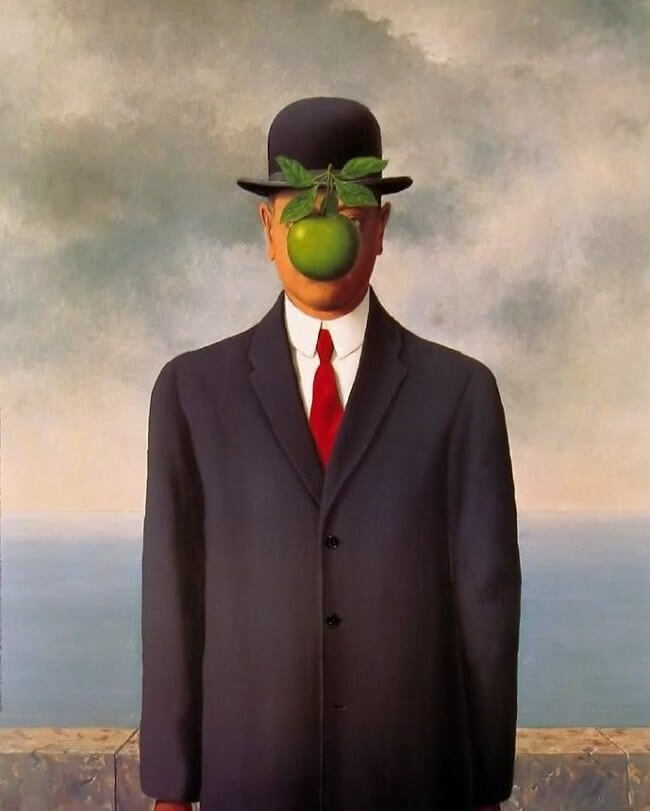 The Son of Man, Rene Magritte

In a world such as ours, one completely dominated by the dialectical machinations of Reason, a world that necessarily excludes even the possibility of there being any “thing” beyond or contrary to it, only the “Big Man”, the Clever Man, the Insightful Man, the Great Artist, and Aesthetic Genius will – by and through his overwhelming powers of persuasion and the rhetorical grandeur by which he creates his incomparable works of art and fiction – decide and delimit the bounds of possibility for all those held under His hypnotic sway; that sway which also supplies such lessor souls with at least an existential outline by which they might find, if not meaning and purpose, then at least a general point of reference by which they might orient the teleological prosecution of their thoughts and deeds.

That such a towering Genuis would even have the opportunity to pursue this primordial role in absence of the domain of Faith to give the products of his Reason their form and structure can, in my estimation, be solely attributed to the working of the so-called “Will to Power” as well as the sensual gratification and intellectual fulfillment that the creation of novel and profound works of art does indeed elicit in the body and mind of those brave and persistent enough to pursue and complete them. In short, the Great Man will write and create because to do so “feels good”, which is to say, exhilarating and powerful, two sentiments that could not be any more arbitrary and temporary in the whole of man’s sensible arsenal.

Indeed, though the Great Man and his chosen neophytes might supply the world its meaning and purpose, which is actually his personal meaning and purpose, arbitrary as the Will to Power animating his products of thought are, will find themselves perpetually enslaved, beset, and beholden to mere sensuality and mental stimulation, intense and powerful as such feelings doubtless are at every turn.

The Will to Power primarily afflicts the greatest minds and bodies and spares every lesser soul who still erroneously believes that “true” meaning and purpose can yet be found within and through the machinations of Reason and its innumerable products – whether those machinations be expressed through technological science, religion, art, or – God forbid – the practice of so-called “philosophy”.

So intoxicating is the Will to Power to those particular body-minds most predisposed to its influence that such ones are quite easily led astray into the false beliefs that those powerful feelings continually evoke, some of which are indeed so powerful and their effects so pronounced that the Great Mind actually begins to be deluded into believing that any one particular insight as well as the Will to Power that undergirded it might be permanently true, which is to say,

Nihilism is, of course, the unintended consequence of all aesthetic activity. It cannot be avoided. For “art” – if it is to retain the teleological indeterminacy that might render the endeavor “art” in the first place – must begin without a specific goal in mind (otherwise it will simply be “science” or formula). It must, indeed, be “worthless”.

Yet, it is precisely through art’s inherent “meaninglessness” that – should one actually recognize this inescapable quality of art in the first place and thereafter take it to the furthest possible extent – one might be led to confront Nihilism and perhaps overcome it with the words “I don’t know” and, further, “I do not need to know”.

The best – no only – kind of art is teleologically indeterminant. It and only it has the power to lead a man to Faith because of Faith’s corresponding indeterminacy. By this does art have the potential to attain the transcendent quality that it forever endeavors so as to fulfill its purpose as “art” and not mere science. For science can never lead a man to God who is unseen.

In the creation of art, Reason must take a backseat to the leadership of Faith and even Irrationality if art is to acquire anything resembling the transcendental virility that might neutralize man’s “will to know” and “will to judge”, those “wills” which slaughter transcendence by positing empirical knowledge – lifeless and impotent as such knowledge indubitably is – as the highest goal of art.

The “goal” of the artist, therefore, should be “no goal” at all, save for the faithful and consistent pursuit of his craft, the completion of his work, and the emotional endurance to persist in such despite no engagement of interest whatsoever from the so-called “outside world”.