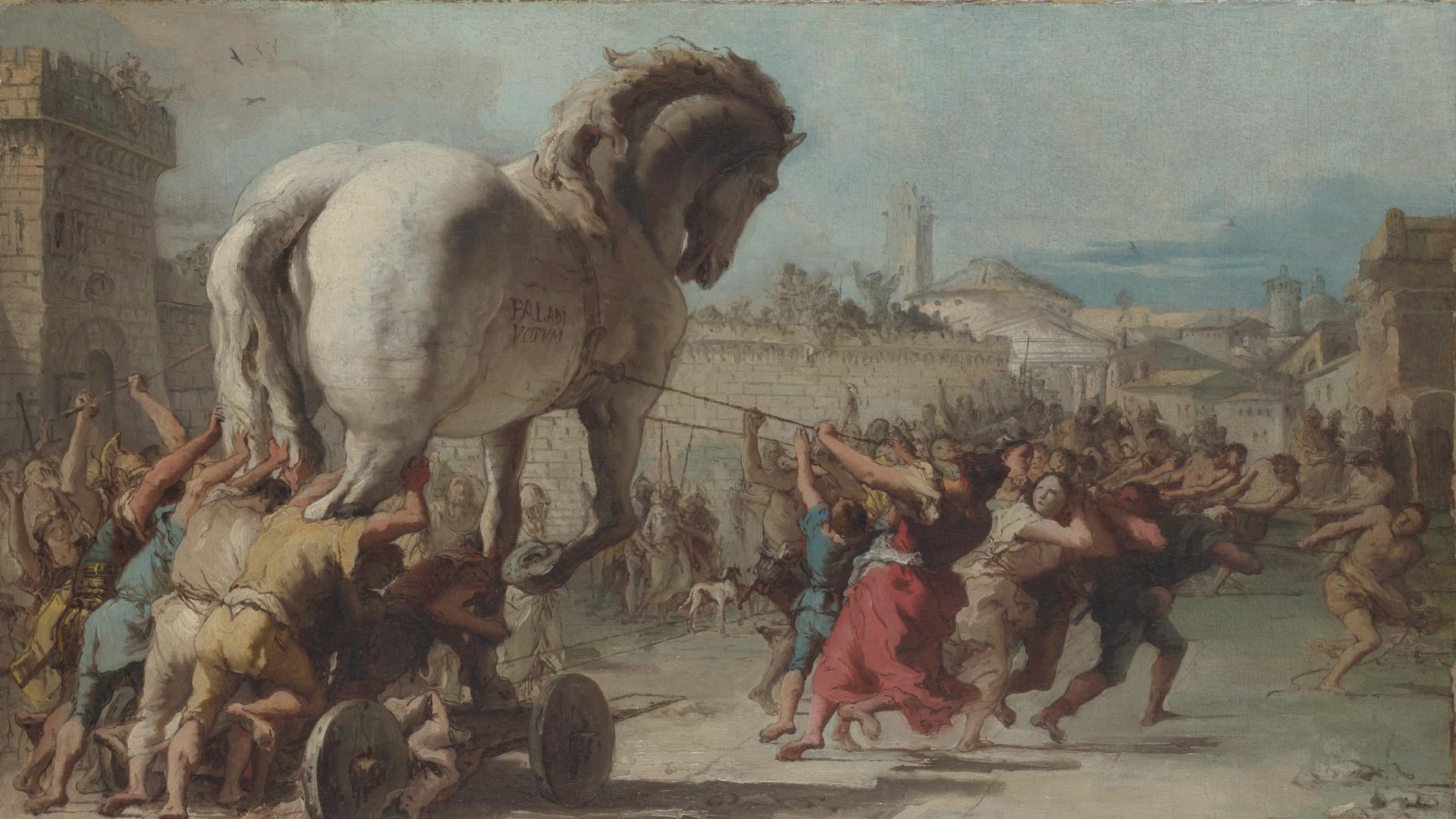 The Procession of the Trojan Horse into Troy, Giovanni Domenico Tiepolo

It can almost be unanimously affirmed that the history of Western Metaphysics – whose essential feature has, since its emergence, been the “discovery” and later codification of the moral dimension of the human experience – began with the moral speculations of Socrates and ended with the aesthetic overturning of the grounds of morality’s metaphysical possibilities (and metaphysics itself) by Nietzsche, overturning which also spelled the end of that cultural phenomenon known colloquially as “modernism”.

“Postmodernism”, which was allegedly born from its ashes, is simply the final stage of collapse of this twenty-five centuries-long process of metaphysical unfoldment; collapse which – insofar as postmodernism can be considered “the incredulity of meta-narratives” – renders unacceptable the meta-narrativistic proclamation “God is dead”, that which marked both the beginning of Postmodernity’s reign as well as the end of the history of Western Metaphysics, unacceptable from our particular place and time in history anyway.

Where then is man to existentially turn in such a self-sabotaging generation?

As stated elsewhere, the sole recourse that contemporary humanity has at its disposal – insofar as humanity continues to labor under the unrelinquishable tyranny of Reason and Its symbols – is to first reject our postmodern inclinations so as to embrace any number of “grand visions” presented to us by the innumerable modern-day geniuses who proliferate our “popular culture”. According to the strength, resiliency, and effective power of that particular Genius’ vision whom we choose will the endurability and progenerative capacity of such a vision be decided.

But, due to the fact that “after postmodernism”, meta-narratives are no longer possible, contemporary humanity must also allow itself to indulge in a certain pronounced degree of delusion so that we might embrace any meta-narrative moving forward, this self-delusion which – after everything we’ve existentially had to endure in the last century and a half – will have to be greater than the combined delusions of every prior lie that man has ever collectively embraced in order to truly overcome the ruthless demands of the postmodern edict.

Indeed, only a god – or perhaps in this case, “an anti-Christ” – will wield such deluding power with all the accompanying signs, wonders, and miracle-working necessary to appeal to the flippant, scientifically-anesthetized senses of modern man, those same senses which have only ever estranged man from the Truth of Faith, unactualizable and beyond the will of man as Faith and Its Truth is.

Nihilism is indeed an incredibly productive force, perhaps the only “actual” productive force that the Great Mind has at his creative disposal. For only when every value devised in and by the domain of Reason is recognized as a groundless and ephemeral creation of man can the Great Mind, with Nihilism as his backdrop and the insatiable Will to Power animating his actions, begin to revalue and reorganize the hierarchy of values however he sees fit; “however he sees fit”, that is, according to the machinations of his Reason, those machinations which have no bearing whatsoever on the working and value of Faith other than the contrast to Faith that Reason’s activity supplies.