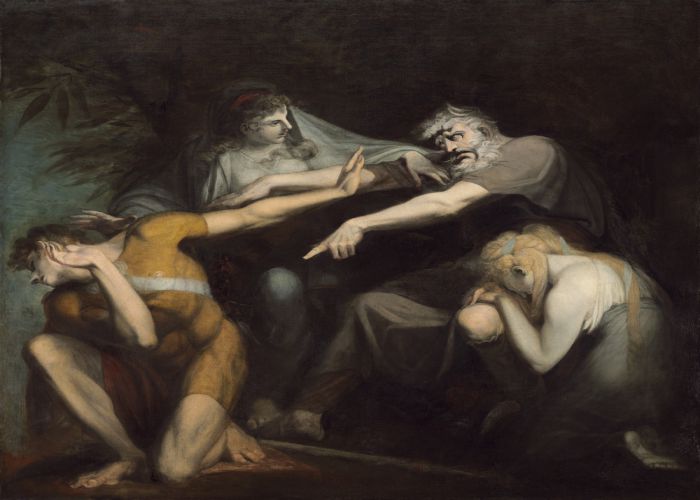 In the domain of Reason, the insatiable desire of a man’s spirit to express and embody the Will to Power to the fullest possible extent will – by deluding those individuals so caught in its sway with the erroneous notion that the Will has the ability to overcome or even sufficiently ignore the claims of Nihilism – be eventually forced to confront the Tragedy of the Greeks, that horrifying, immutable revelation which says, “every act of unbridled hubris will eventually demand its own bitter payment so that Justice may again balance her scales”.

That payment, great as it is, will in every case prevent a man from returning to the euphoric emotional heights of his most audacious hubristic attempt despite his best efforts to regain such euphoria and the untold destruction he may bring about through its effort; a revelation that, in order to fulfill the mandate of the “Hero”, one must become its shameful opposite; the Tragic Hero who, being a man, must die or else confront the finitude of his existence and with it, the untranscendability of his own heroic actions, each act that is, indeed, meaningless and arbitrary insofar as such motivations originate within the mind, body, and will of man by way of the Will to Power, ephemeral as such things are and always will be.

The Will to Power is not only embodied in the Tragedy of the Greeks, it is the Tragedy of the Greeks. Tragedy is the artistic expression, captured and aesthetically rendered by the Greek genius, of the bodily phenomenon identified by Nietzsche as “the Will to Power”. Tragedy thus maps and portrays the internal machinations and psycho-emotional trajectory of the Will in artistic, and sometimes actual, form.

When Tragedy is expressed or experienced in a man’s life or that of a nation, it is the Will to Power working in and through the domain of Reason that brings it about. Because man so often finds himself unable to refrain from following the Will’s arch whenever It entices him, he will, if he does indeed pursue It, eventually be compelled to overreach the initial scope of his original endeavor. The “event horizon” of the Will’s trajectory is that point at which a man realizes he will have no safe return “home” if he continues following the Will without paying some sort of costly recompense. Here, if a man maintains his pursuit, Hubris takes over, the Tragic Hero is born and the deed resumes until the feeling of ever-increasing levels of power and superiority can no longer be sustained, nor the apogee of his highest emotional peak be regained. At this terminus, the Will rouses the Tragic Hero to the realization of the deed’s and his own – and thus life’s – unsustainability, futility, and arbitrariness – as arbitrary as the Will which animated the deed in the first place, inasmuch as the Will’s entire teleology is the unending pursuit of ever-higher degrees of expressing Itself. All told, however, it is the Will’s futility which is intended to bring the Hero before Nihilism so as to either save his soul through the surrender of his own will to the power of the Spirit of God or else obliterate his status as Hero entirely by frustrating his every subsequent attempt to do anything productive at all in the future, insofar as any deed he might do will pale in comparison to the glory of the first Tragic Endeavor of which he can never return and was yet also futile. How then could some lesser pursuit not also produce thus and be thus?

If art does not embody the Tragic Spirit and its unavoidable revelation that every heroic act is doomed to “fail”, which is to say “to prove incapable of supplying lasting, transcendent purpose to the life of the hero”, it can hardly be considered art. An apologue maybe, or a parable, but not art.