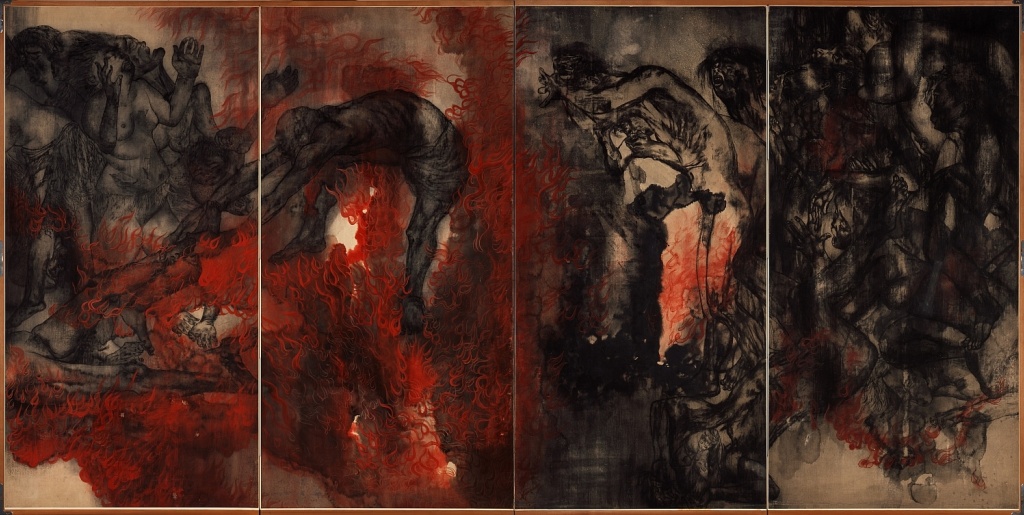 The highest function of Language, acting within the domain of Reason and abiding by the edicts that Reason decrees, is to continually redefine not only its own innumerable particulars but also the overarching possibilities of the Value or Values of Language itself. Insofar as Language is both the structure and bedrock of and for the expression, elucidation, and ordering of Value(s), to redefine the limits of language is to redefine – or revalue – the meaning, purpose, and hierarchy of Values, or else “the most important and precious things to man and his kind”.

The greatest purpose of Language and by it, also Reason, is realized in the revaluation of Values made possible by the irresistible pursuit of the Will to Power working through human life which rewards Language’s “Revaluators” with intense impressions of superiority, personal fulfillment, and intellectual satisfaction, never mind how temporary such feelings and universally arbitrary the final destination.

In light of all I’ve written about the effective power of the Spirit of God, it can also be said of Him that He manifests most emphatically in and through the Will to Power which, however arbitrary the Will’s aims might seem in hindsight within the domain of Reason, inevitably leads a man to find no more transcendent purpose than yet still greater feelings of superiority and euphoria, those which always accompany the Will to Power whenever expressed in and by the bodily and intellectual senses of man. The Spirit of God then, manifesting in this context as “power itself” and “nothing more” (for there can be nothing more than pure power), is He who animates the expression of and desire for the Will to Power in man with the hopes that through Its expression man may exhaust every teleological end that might be possible within the domain of Reason, each one of those ends that will inevitably be found in want of “something more”, “something beyond”, or “something deeper”. Man, however, will be forever incapable of apprehending this “something more” within the sterile and castrated confines of Reason because it is the Spirit of God Himself who is this “something more” and “something beyond” – and His is the domain of Faith. And, because The Spirit works through and in the Will to Power and, given man’s overwhelming desire for It and yet the Will’s apparent aimlessness within the domain of Reason, every expression of the Will cannot help but lead man to Nihilism. For, insofar as man’s highest desire is to express the Will to Power whose end is only more of itself, Nihilism will, arbitrary as it apparently is, be unavoidable. Though, it is precisely in the shadowlands of Nihilism in which the Holy Spirit most presciently resides so as to ferry those whom He foreknew into the “domain” of Faith insofar as a man will, in his final wilful act, voluntarily surrender to the Truth of Reason’s Nihilism – which is its end – and be thereby reduced to nothing, and in his nothingness alas find salvation through the Spirit from the tedious striving of Reason, that salvation which manifests as the “rest” of God, the “I don’t know” of God, the “I do not need to know”.

The “Will to Power”, seen here as the irresistible striving of the Spirit of God, can be witnessed everywhere and in everything: in every man, beast, plant, organism, even the very air we breathe, the earth itself, and also the sun, stars, and cosmos as well as every thought, inclination, desire or inertness that may actively pulsate or listlessly recline within the realm of possibility. The Will to Power, therefore, aping the essence of “The Spirit of God”, is the substance and structure of all action, thought, desire, movement, instinct, and will to change and become, or not.

No other organism in the known cosmos has the innate ability to express this Will through art or otherwise than man; man who also yearns to be known by this Will as well as the Spirit who animates it insofar as man has also a self-awareness and through it, his own will which he must surrender and even sacrifice if he is to become likewise a star, a cosmos, a nature, a unity – all to say, a “Son” of this Spirit and of this Power which occurs not by the will of man but by The Spirit Himself who is the only actual Will and Power in the “known” universe and also the unknown, He who moves and does according to His own good pleasure and for His own transcendent purposes; those purposes which can alas be ours insofar as we are willing to allow the Will to Power to take us before the stool of Nihilism to have all our whys and ways undone forever. Amen.

As stated previously, The Will to Power most poignantly expresses itself in the form of Tragedy, whether witnessed in art or the rise and fall of nations and peoples, or ideas, or in and through the lives of individual men. Tragedy is the creative arc The Will to Power assumes as it streaks across the emotional skies, the “narrative arc” if you will, the teleological arc. The Greek conception of “hubris” is the rationalization or else “the emotional manifestation” of the “Will” of the Will to Power in a person’s life, the “active” component of its nature which will always strive to surpass and surmount that which it has already mastered and accomplished, never mind how difficult or impossible such an obstacle might be. The striving of Hubris will stop at nothing to achieve its goal of surpassing that particular level of power it has already attained. Throwing all caution to the wind while making a mockery of all moderation, Hubris thinks little of slaughtering a man’s most hallowed values in order to animate and be animated by the Will to Power more completely. Indeed, nothing that stands in its way will be spared. This callous disregard for impediments to Hubris’ aims merely increases the feeling of power the Will is able to express on its way toward higher and more luminous perceptions of superiority and intellectual grandiosity. Even though the sole reducible truth of tragedy is that a man’s hubris will have to be repaid in equal and – depending on the level of carnage left in its wake – sometimes greater amounts than was initially exacted by the hubristic impulse, the Will will likewise count little the cost of its actions, thus fating its fall back into nihilism.

The epic heroes were always thought to have angered or made jealous or even envious the gods by way of their hubris which incessantly demanded a recompense, not from and to all the gods uniformly, but only those who did not appreciate the heroic display of impious bravado, apparent sacrilege, and audacity. Now, though we moderns might have transmuted the gods into some biological law or psychological principle, even we would today say that the nature of the body and mind of man does not allow him to move perpetually from strength to heroic strength, from bravado to bravado without some kind of celestial repayment. As such, then and also now will the man who is tragically blinded to these eternal laws nevertheless be beholden to them, for man’s body, despite how strong a hero’s internal and external disposition might be, cannot continue going up in a straight line forever. No, the nature of man’s senses, emotions, and “willpower” will necessarily arc along with the Will which means he must at some point come down, lest he lose the proper perspective of the potential reach of his next expression of the Will to Power; that expression which, should he gather the courage to follow the arc once more to reach it – depending on the prior peak that a man might have attained – will only be reanimated in that rare breed of men whom the Spirit of God has chosen out of the diverse array of humanity to do and to act for His good pleasure and purpose; those men whom He intends to bring to naught so that He can show Himself as the only thing that “is”.