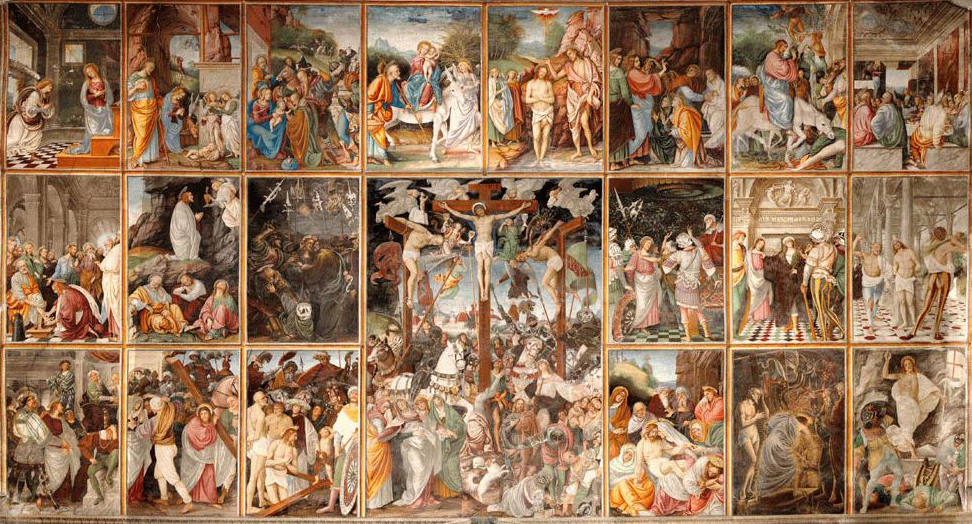 The Life of Christ, Gaudenzio Ferrari

All matter, whether derived from other matter or the immaterial actuality of the mind, has, at best, “a limited omniscience” inasmuch as the reach of a creature’s knowledge cannot extend much beyond the intellectual capacity of the place, time, and conditions of their being, those which are rooted in the bodily experience of their lived emotions and the sensual impressions that give those emotions – and, of course, the knowledge that may be produced from such – “life”.

This limited omniscience can even be seen in that exemplar of humanity, that Form and Mold by which humanity itself was constructed and in and by whose word humanity draws life: the Son of God whom we normally assume is but the opposite of material humanity instead of the actualized Form by which all material was fashioned; He Who, “being the very nature of God, did not consider equality with God something to be used to his own advantage, but made himself nothing by taking the nature of a servant, being made in human likeness. And being found in appearance as a man, humbled himself by becoming obedient to death – even death on a cross!” (Phil 2:6-8) He who was “in the beginning – the Word, with God, as God; He who was with God in the beginning, and through whom were all things made and without whom nothing was made that has been made. In Him which is life, that life being the light of all mankind.” (John 1:1-4) The Son who was “slain from the foundation of the world”; Christ, as matter like you and I (or as we matter like Him), is the limited omniscience of God, the vessel through whom God has, does, and will continue to communicate to both man and nature the Godhead’s unapprehenable will, and not merely His will but, more importantly for man who is an emotional creature, the Godhead’s “heart” and “intent” which, in order for such to fulfill their duties as “heart”, “emotion”, and all that such emotion might communicate and sensual signify, must come as an unanticipated “surprise” to the Godhead – and that, only through the limited omniscience that might be found in His Christ who, though fully confident in the overall outcome of His accomplishments in the temporal domain, knows little the peculiar responses of each one of his beloved particulars.

As such, it is through Christ that the Godhead could, though omnipotent and omniscience in their triune nature, nevertheless be provoked to jealousy by the perennial whorishness of the Jews, and be filled with rage at their insolence, and could be moved to sorrow for having made man, and be thereafter compelled to wipe the earth clean of all humanity so that it might be started anew with Noah. For would not God “the Father”, in His omniscience, know that such drastic measures would merely forestall – for perhaps a few generations – the consequences of sin in man and on the earth without the direct intervention of His Son and Spirit? The Father would know and have known but not the Son whom, though His wisdom and foresight be indeed beyond the reckoning of any one of us, is nevertheless limited by the movement and flux of time of which He Himself voluntarily subjected Himself (which was His own decision, it must be reiterated). Christ who came, comes, and will come again, just as he came to Abraham, to Moses, Joshua, David, the prophets, the Twelve, to Paul, and others in the form of angels, burning bushes, blinding visions, talking donkeys, or pillars of fire by night and baneful cloud by day, by captains of angelic hosts, by manna each morning, and by rock who – when struck – gave up its water whether in parched deserts or upon lonely crucifixes.

Indeed, whenever and wherever we see in scripture God speak to man’s senses, or appear in celestial wonder, or move in paradoxical power it is His Christ who is the vessel which fulfills the The Godhead’s impenetrable will; the Son who – having actually come in the “fullness of time” – comes to man after His resurrection in the form of his Spirit who is the totality of the “realm” of Faith and is indeed the essential power of the “Word of God”; the Spirit who – just as the Son was the promise of the Father – is the promise of The Son; the Spirit whom, as an immaterial reality but yet still “reality”, needs not be presaged as the material Son had time and again been prophesied in the material domain of nature before the “fullness of His apotheosis”, but will, as immaterial reality, principally be witnessed in the immateriality of the mind which, in our present age in which Reason does indeed hold dominion over “what-is” in such an overwhelming way, is the principal battlefield and also the primary combatant in that war of the mind in which man has – through his Reason – involuntarily stepped forth as the Spirit’s adversary; Reason which, in our age of Reason, is indeed as a Raving Goliath to the quiet obedience of the Godhead’s Spirit which, caring nothing about the giant’s size and power, slings the stone of offense, absurdity, and paradox at Reason which penetrates deep into its forehead to slay him through nihilism, that forehead and the neck which hoists it upon the giant’s shoulders which is readily separated and ferried before the stool of God by the Spirit as a trophy and prize, a testament to the power of Faith and the meaningless striving of Reason which can never know the purpose for which it strives until alas it is fulfills its teleology by its own surrender and suspense.