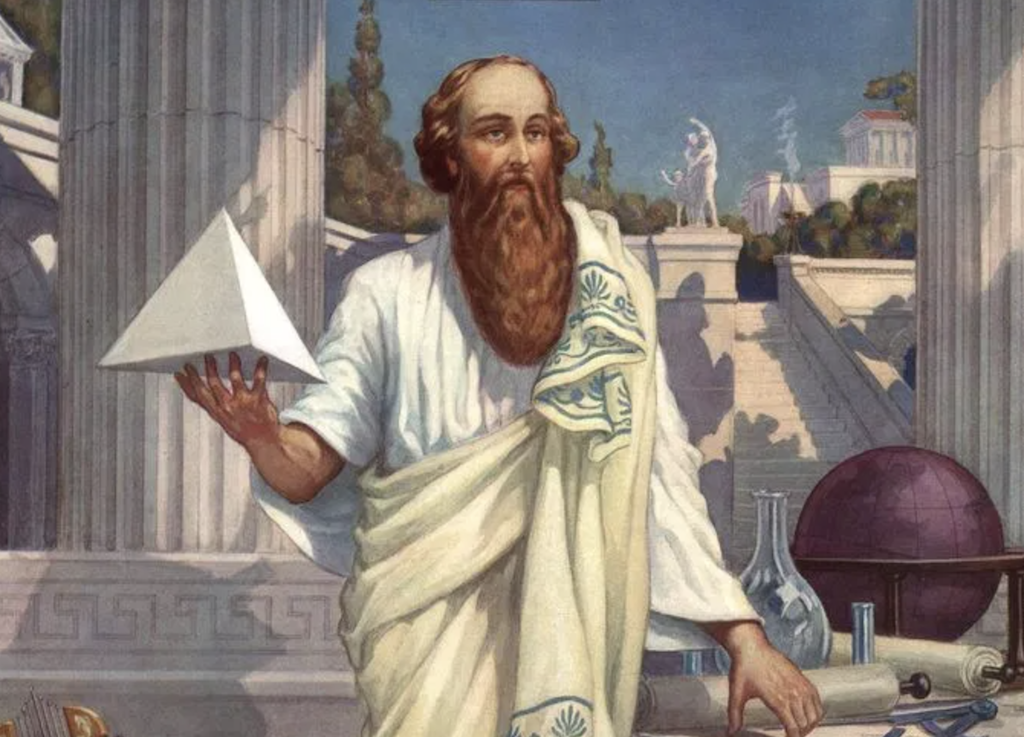 The genius of Pythagoras is witnessed in his prohibition against the consumption of beans, more specifically, their outright demonization as the infernal link between this world and Hades. He is said to have believed that beans, particularly the broad bean, aka “fava”, contained “souls”, thus eating them was akin to a type of cannibalism. Ridiculous, sure, yet the shortcomings of his archaic, pre-rational naivete could at the same time be witnessed in his equally nonsensical and more dubious prohibition against meat-eating – also a form of cannibalism – and by it, his exhortation of so-called “vegetarianism” — from which all manner of diabolical beliefs doubtless flowed. Indeed, he and the devotees that came after him – of which even Plato was numbered for a time – indubitably went mad for their excessive plant consumption, as can be evidenced in the proliferation of their strange habits of divine worship and the innumerable philosophical dead-ends for which the modern world is – apart from the theorem attributed to his name – all the better for being largely ignorant of.

“In meat is the power and vigor of life, namely, the spirit of the animal consumed.”

My philosophy is that of the predator who seeks as a kind of daily “first fruit” the organ meats – the liver, heart, kidney, stomach lining, and glands – those which have, since pre-conscious times, been prized the world over for their unequaled nutrition and nourishment; the organs which are rivaled only by the gelatinous fat of the animal that can be found in and around the muscle meat and offal, followed next by the cream of the beast – i. e. butter – and finally, muscle meat, the fattier the better. In fact, if there are any practical advisory remarks in my philosophy it would be to avoid – though never outright reject unless the availability of the choice cuts is limited – lean slabs of meat, be they from the sinewy working muscles of the ungulate, the flesh of wild game, or the body poultry or certain warm-water non-fatty fish. Plants, aside from the occasional berry, temperate or Mediterranean fruit, and perhaps a handful of herbs and spices that may bestow upon one’s meat a little palatable variety, should be more or less avoided if one is to maintain optimal bodily and mental health and spiritual robustness. For, vegetarianism, and also that most deleterious and asinine fad known as “veganism”, are forms of dietary syphilis and do nothing but waste the mind and rob man of the hardiness to endure the truly difficult and lonely and trying of thought, to say nothing of strenuous bodily action.

It is unclear how Thales’ so-called “philosophy”, which is to say his “non-mythological speculations” – of which would have been “utterly worthless” to his fellow Milesians – would have or even could have been received without the practical demonstration of his speculations by a people who had as yet no single point of non-mythological perspective; demonstrations which – whether apocryphal or not – came in the form of his cornering the olive press market before a particularly bountiful Milesian olive harvest which he predicted, or his later prediction of a solar eclipse during the Battle of Halys which, taken by both warring factions as a bad omen from the gods, coerced both the Lydians and Medes to sue for peace more or less immediately. It is, of course, not known what kind of social or political traction these demonstrations would have had upon the ultimate reception of his rudimentary “philosophy”. Reception did, however, in some way occur because history includes him, along with Solon, as one of the seven sages of pre-classical Greece – in addition to the fact that his basic ideas were still in circulation during the time of Aristotle who apparently commented upon them at length; such commentary which has, unfortunately, been lost to modernity.

Socrates caused philosophy, which initially was “speculation about natural phenomena”, to turn toward virtue, and by extension “ethics” and whether there be a moral dimension to the human experience which might exist beyond and apart from human experience; that moral dimension – whether it be called the horizon of the Logos, the realm of the Forms, the Nous, or, later, Aristotelian ethics, or even later, the God of the Hebrews and His heavens – is the domain of metaphysics, or simply “metaphysics”. Socrates, being one of the only “thinking” or “reasoning” or “rational” men of his time (or of any time for that matter) appears to have forced this change in orientation so as to cleanse the Greek mind of the societal, intellectual, and moral chaos that ensued in wake of the destabilizing rhetoric of the skeptics and Sophists, the latter which I am of the opinion Socrates could be numbered among, never mind how great and transcendent and anti-Sophistical his “project” may have been.

What has ensued since Socrates’ time – taking the broadest perspective that one might be able to attain – has been a dialectical unfoldment of intellectual history of the West which has witnessed the development of philosophy in a certain direction perhaps until, if I had to guess, Thomas Aquinas, after whom that development turned back and headed the opposite way; a reversal which – in my opinion – can rightly be bookended with Nietzsche who reckoned himself the second coming of Socrates, though one who preached an opposite message.

If this is in any sense “true” – even in an oblique, remote, and unequal manner – we are now at a time upon the intellectual spectrum not dissimilar to that of the pre-Socratics. For we “modern philosophers”, just as the pre-Socratics, seem beset by similar, though perhaps opposite, societal, cultural, and mass-psychological conditions that Thales had to continually war against, his being the cultural inertia produced by the certainty of thoughtless tradition, unexamined heritage, and well-entrenched, long-established custom, those which no doubt “worked” for the people of his age and their offspring, and, more than that, appeared to work for all men at all times everywhere (their world, of course, being minute in size and scope compared to ours), thus why change it? What is the use in questioning it, or worse, opposing it?

Do not men of today, fumbling as uncoordinated children with the unwieldy immensity of that mental, scientific, and psychological heritage which we have been given, hold fast to the same kind of brute understanding of the “basic” premises of science (of which virtually no one can consensually articulate) that tradition, custom, and heritage held in pre-Classical Greece?

Is not their tradition and custom our science and technology?

“The sun is fixed in the heavens as it has always been and the laws of physics unchanged.” Indeed, “everything goes on as it has since the beginning of creation” (that creation which, to most moderns, sounded like a loud noise and has developed, from low to high, according to the imperceptibly slow, aching crawl of evolution). Thus why change it? What is the use in questioning it, or worse, opposing it?

“The sun is fixed in the heavens and the earth revolves around it.” It is so.

It seems to me that modern philosophers, so that their life’s work might leave an impression upon history and their lives not be deemed completely worthless, like Thales, now need to demonstrate the actualizing power of their philosophy through some kind of sign or wonder; Thales who, as mentioned above, by employing either Egyptian astronomical principles or Babylonian wisdom, predicted – by refining those earlier, inferior tombs of knowledge – an olive bumper crop in his native Miletus and, more importantly, the solar eclipse during the Battle of Halys and by so doing proved to a self-consciousing people of nascent Reason the power of Reason. Going the other way, the modern philosopher must in our day prove to an un-self-conscioning people of Faith the power of Faith in whatever form that sign or wonder might “appear” to the individual or individuals who may perceive it.

The most ancient aristocracies, unaware of the actual origin of their rank and privilege, in lieu of such concrete knowledge, always claimed their lineage was of a divine genesis. Indeed, the patriarch of every line was, if not a god, then a demi-god, and if not a demi-god then a deified hero whose fantastic deeds had some direct analog in the real world of tangible things and events. What’s more, the oldest and earliest epics depicting these heroes perhaps more than anything sought to subliminally establish, defend, and entrench the character, make-up, and values of the aristocracy and the necessity of the social hierarchy that the aristocracy engendered and reinforced with the result that the values of the lower rungs of the hierarchy would be also implied in and by the fact that the subordinate strata were necessarily contrary and even opposed to the values of the aristocracy; that opposition which, nevertheless, so that each might strata might endure and the hierarchy be maintained, was so clearly defined that, by its mere insinuation, each member of the hierarchy – no matter one’s rank or station – could be assured of their vital, necessary, and irreplaceable role and position therein.

In this light, one can say that “existentialism” – if understood to be the internal, mental, and emotional tension that arises when one is unassured of their place in society as well as their overall worth and value to the whole – did not exist before the close of the medieval period. One could further say that “modernity” can be considered the cultural, artistic, societal, and spiritual expression of the absence of hierarchy and proper aristocracy.