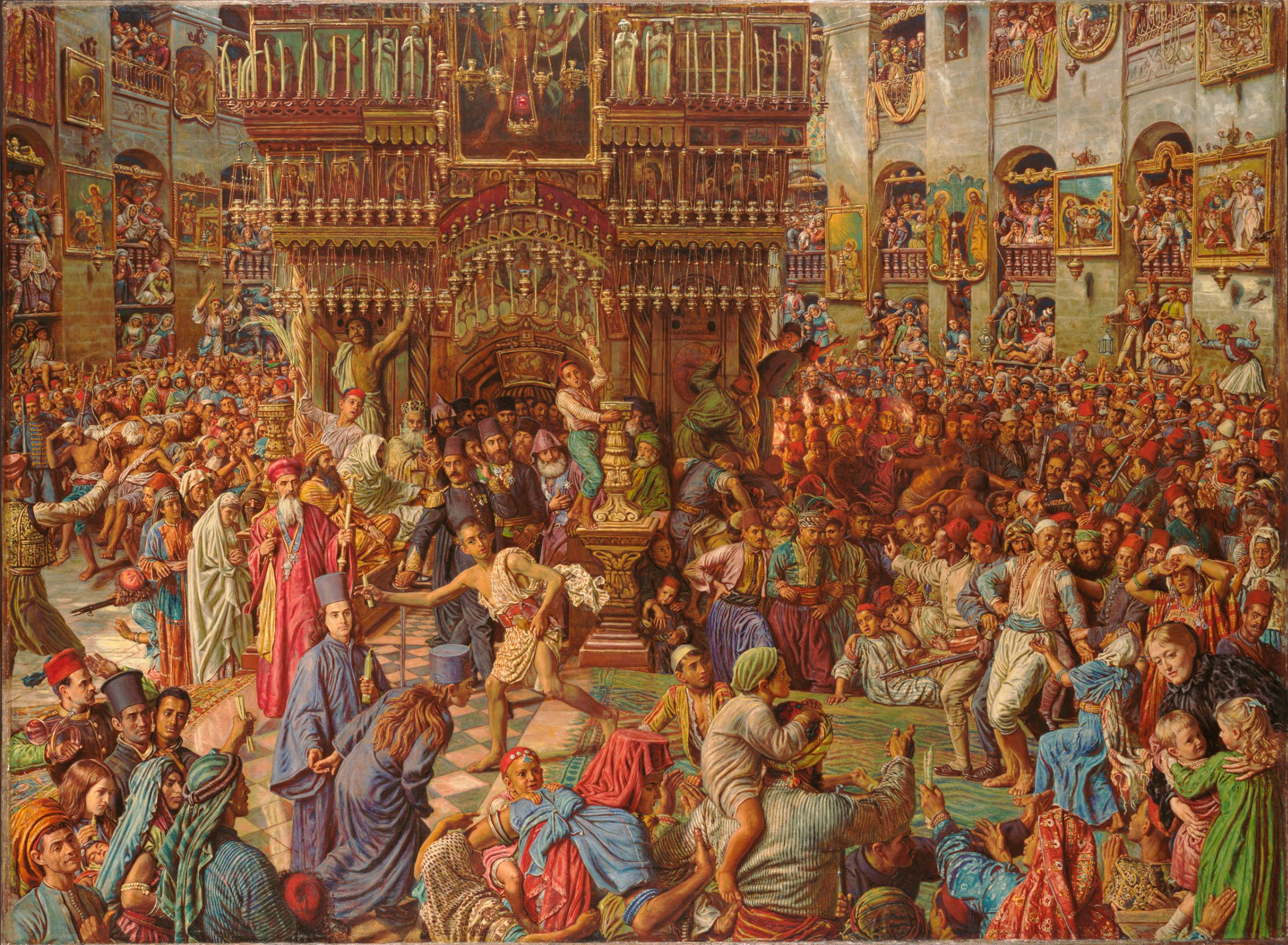 The Miracle of the Holy Fire, William Hunt

Empirical evidence for the existence of God? How preposterous! As if the Lord of heaven and earth would contradict His own immutable Law of Faith simply to condescend His lofty nature so as to conform to the dubious demands of man’s senses!

Indeed, there never has nor ever will be a singular, unequivocal, and ubiquitous shred of empirical “evidence” nor a universal rational argument for the existence of God, not one that will satisfy every diverse opinion that might proliferate the bias of men, particularly if such evidence derives from and is dependent upon the reasoning machinations of man.

If empirical evidence, insofar as it is both derived from and also filters through the bodily senses of man, each one of those senses of each one of those men which necessarily differ from the next, cannot be globally accessed by any and every individual who might take the time to consider it irrespective of place and time, can such “evidence” be rightly called “evidence” at all? For all “empirical evidence” strives for and in fact can only be considered as such if it attains a certain undeniable degree of sensual “objectivity”, the kind of objectivity which – as elsewhere stated – cannot be achieved insofar as the one presenting the evidence and also the one who receives it labor under the same linguistic deceptions of Reason; Reason which can only create ceaseless novelty which, as “novelty” made by the aesthetic hand of man, will one day lose its novel status and by so doing begin to age and die like all things that can be said to “exist” within the paradigm of man’s purview.

“If a man can be reasoned into the kingdom of God he can certainly be reasoned out of it.”

Even “signs and wonders” do not provide universal evidence for the existence of God. For every individual who witnesses the “same” miracle will inevitably perceive it differently, not merely its consequences but also its source, immediate effects, and ultimate meaning, should the miracle appear to have any in the first place.

No, only the “intellectual” qualities of a naturally-occurring Paradox, the kind that might be aroused when one encounters a supposed miracle, will have the power to point a man to God, and only then, by the will of the Spirit of God working through him so that He might force such a one to surrender their incessant want of an everywhere palatable explanation that might supply them a temporary “purpose” of the miracle.

If I may be so bold, miracles are intended to confound both the disbelieving as well as he who believes: the first who might be inaugurated into the “domain” of Faith; the second to ferry him further via incredulity into the inner recesses of Faith, recesses that are inaccessible without the power of ever-increasing levels of offense, wonder, confusion, and contradiction, the kind which never fail to shake a man from where he is so as to move him to that place the Spirit wills and wants.

All women are witches and spellcasters of one degree or another, insofar as a “witch” might be defined as one who endeavors to manipulate through language, symbol, and bodily energy the will of others to achieve whatever evil end that might have been hatched in their treacherous hearts. For in and of themselves, women can achieve nothing “on their own” and must therefore rely on a man (who represents the active, fertilizing principle in nature) to “get what they want”.

When women are young and virile, they manipulate – among various devises – by way of charm, sexual persuasion, and bodily allurement, which is to say “the promise of spring”, of which man finds intoxicating. When they are wintered and grey and gone of their youth, virility, beauty, and any sort of procreative value they might have once had, most females resort to outright spellcasting and soothsaying, or at least a type of matriarchal tyranny in order to achieve their aims. Such is why the archetypal figure of the witch is always a widowed or divorced, post-menopausal, used, sagging, hideous, and secluded old wretch who lives alone in candy houses and principally seeks to torment young women under the cover darkness, young women whom they, on the one hand, by jealousy despise but on the other, also know they must work in and through in order to achieve their goals once the inescapable truth of time is made manifest in their dried breasts, hollowed wombs, and wrinkled flesh.

Think me harsh in this universal assessment? What then is the dream and unquenchable desire of virtually every woman who lives past half a century of age? Of course, that she may be young again and beautiful – desirable, even “virile“ – hence the cosmetic and so-called “beauty” industry, hence the so-called “wellness” industry, hence the fashion industry, hence ubiquitous advertising in the first place which appeals chiefly to women, and so on.

All contemporary advertising is intended to stoke the fears of aging women and to ally their interests against the inevitability of time and decay. Modern women are increasingly becoming the primary breadwinners of households, as well as the primary spenders and consumers in contemporary society, their consumption which is either realized through the incessant nagging of their husbands to acquire for them a certain object of desire or through their own, direct deployment of funds.

It must be asked then, with grave seriousness, what use has a man, especially one cut from a distinctly “masculine” cloth (whatever that means these days) in an increasingly femininized world ruled by the image of Great Mother?

And yet, it seems to me on the face of it, that modern, industrial and as it were “post-industrial” or else “digital” society is completely incompatible with the reign of the Matriarch insofar as modern society is still principally based on merit and incentives, two qualities that the Matriarchal Spirit is so completely averse that she stops at nothing to undermine and neutralize so as to level the field of possibility to the lowest common denominator – or else to the weakest, most pitiful, handicapped, and ineffectual of all her many offspring – all so that no difference whatsoever might be found among her children, especially differences that might enable individual members to excel beyond their brothers and, worse, be rewarded for such excellence; the Matriarch’s end goal, of course, being to shield – and even hide – her children from the severe demands of their Father with the intent that they all might get along in a kind of cooperative eternal adolescence without pain, fear, worry, angst, aggression, or even desire for much of anything beyond the immature wants and needs of a child for food, shelter, comfort, respite from boredom and the allowance of perpetual indulgence in the most base desires of which only the youngest of our species are capable.