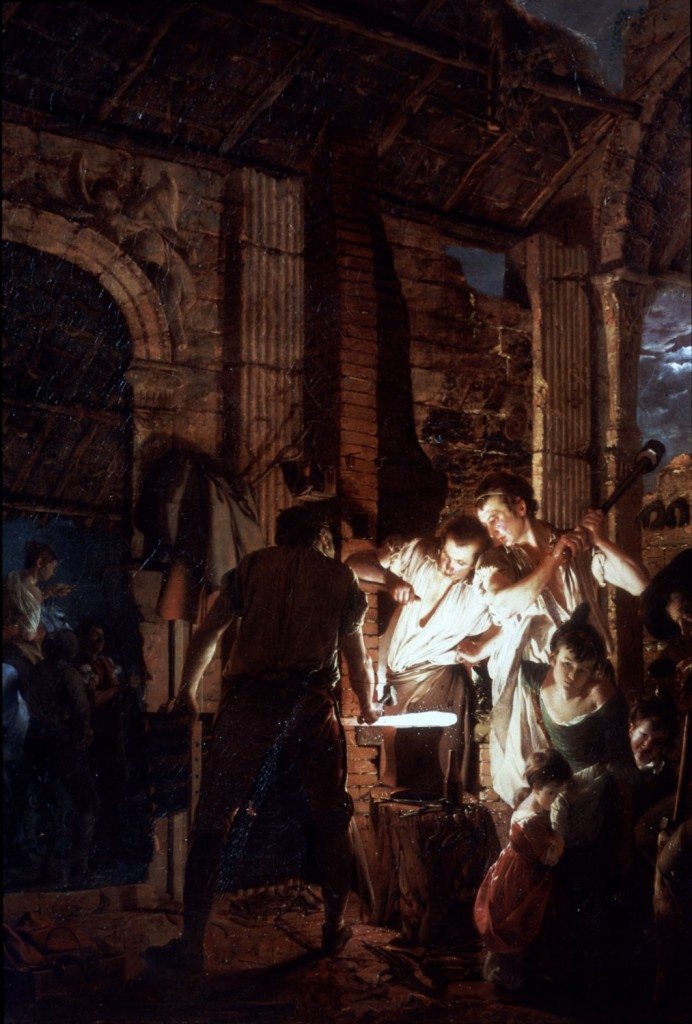 108. In no way can I know the mind of God, yet can I trust Him, and even in my ignorance, alas, am I able to trust Him more than if I “knew” everything with certainty. For, the higher one ascends unto the deepest depths and mysteries of God, the more one is confronted with certain unsynthesizable paradoxes and offenses so great that one cannot keep their eyes fixed thereupon for such is an affront to the good sensibilities of man.

110. Did not David, in his triumphant display of revelry when welcoming home the ark of God, dance near naked before the procession, his zeal which was so appalling to Michal, daughter of Saul, that she rebuked him for behaving in such a way, as king, before the congregation. And did not David say that he would be “more vile than thus, and will be base in mine own sight”? And was not this Michal barren her whole life unto death for her high sensibilities and upright moral convictions and David everywhere declared “a man after God’s own heart”? {2 Sam 6:14-23}

111. As such, insofar as a man chooses to remain mired in his good sensibilities and content himself with his own high-mindedness will he never truly confront the deep paradoxes, conundrums, and offenses of God, if indeed such a one can even come to the knowledge of saving grace at all.

“Lord, may I hate sin as You hate sin and indeed cannot look upon it nor have any communion with it in the slightest. Build in me, oh God, much hatred.”

112. The worker who believes he can successfully work his way into God’s favor will judge and, in fact, has already judged – through his works – God’s work and the inconceivable holiness required of such a work so low to the point that God’s work is actually despised.

113. Yes, the worker by and through his works loathes and despises the work of Christ and His cross and indeed would never lower his own high-minded view of himself to ever think of throwing himself upon the mercies of God. Such is why I continually say that “good men”, those for whom many thousands would be willing to follow and die, are infinitely further from the grace of God than sinners. “The good” and also “the rational, reasonable, sound-minded”, are, in fact, the enemies of God, even those who think they have been “saved” via their own free-will choice to “follow God”.

114. If anything, the sinner is not one who esteems himself too highly and through this low (and therefore accurate) assessment of his own precarious spiritual state is, from the standpoint of God, far closer to the feet of Calvary than the good man who lords as a potentate over all the pitiful works that his own hands have apparently accomplished.

115. Works are self-righteous and lead to damnation. One must be careful to not hang his hope on what he believes he has done or decided on behalf of the Lord as the basis for his salvation – for such a “decision” tramples the finished work of Christ, that finished work – as finished – which needs no qualification from man to be an actualized reality. Such is why the doctrine of God’s immutable sovereignty and His choosing of those who will be saved and sanctified is so impossibly vital to the life of a Christian, especially in the sense-mad will-worshipping hedonism of the modern day. Christ’s finished work is indeed the plumbline for all other thinking about God: for, if a man had any hand whatsoever in his so-called “decision” for Christ, the cross of Christ and the shed blood of the Savior is utterly nullified by the transmutation that takes place which alters the actuality of Christ’s work which bought and ransomed a distinct, specific people irrespective of time and space to the “potentiality” of some future people who will one day “choose” – despite their spiritual deadness in every conceivable way – to embrace the Christ of God.

116. Such works- and deed-based soteriology can never, insofar as man is uniquely and immutably finite and limited, achieve the necessary expression of transcendence that is required for and results from salvation. For man’s deeds are rooted in and cannot extend beyond the here and now. But Christ has transcended the here and now and makes us transcend “to where He is” {John 14:3} through the sanctifying power of His Spirit who also “exists” beyond all time and all space.

117. Indeed, just as the Cross of Christ was specific and actual and yet beyond all specificity and actuality, so too the people whom He chose are also specific, actual, and as irrevocable as the deed itself. For, “to live is Christ” {Phil 1:21} because “we were buried with him through baptism into death in order that, just as Christ was raised from the dead through the glory of the Father, we too may live a new life.” {Rom 6:4}

118. Inasmuch as the Jewish religion was one based, in their eyes, almost exclusively on so-called “good” works by which their own flesh was covenantly bound, and that – given their charge to be the salt and light of and to the world before that time of the gentiles – are the most egregious of all tramplers of the good and righteous, most of whom will see a much hotter flames than those who – though they may have sinned a thousand times over and never sought to repent – did not pretense in the slightest that they lived a “good and upright” life in service to the Lord. {Heb 10:29}

119. To posit the mere notion that man’s so-called “unmitigated freedom of will” is the one thing in the known cosmos whose apparent law God will not in every way violate and commandeer (so as to continue His plans and to forward His will upon the earth) is indeed the greatest deception that modern humanity currently (and unendingly) perpetuates. Did not our Lord, at every turn, subject His own will to the will of the Father, most poignantly in and through His prayers in the garden called Gethsemane on the night He was betrayed? {Luke 22:42-44} If, therefore, the Lord Jesus Himself, whose life is our own and who is our holy Exemplar, coveted not His own will but desired in all things to surfeit His will in favor of the Father’s, so that the scriptures would be fulfilled and the plans and will of God might manifest themselves to creation, so should we surrender our wills too, if even we have them.

120. Surely did Satan visit Jesus in the garden in much the same way that he did in the wilderness, to tempt Him – amid the swirling torment of His heart and utter anguish of His soul – to restore the kingdom to Israel, which – it must be noted – was the very thing His followers asked Him before His ascension {Acts 1:6} and indeed still remains to be fulfilled in order for Him to fulfill the full body of the law, as prophesized? Christ was surely more than capable of restoring the kingdom to Israel, as it is written: “Are you not aware that I can call on My Father, and He will at once put at My disposal more than twelve legions of angels? But how then would the Scriptures be fulfilled that say it must happen this way?” {Matt 26:53-54} — that way being that first the lamb of God, the suffering Servant, and later the lion, the triumphant, ruthless, swift, and holy judge of all the quick and the dead.

121. Satan was allowed to pour the cup of which Jesus would drink in the garden, that which the Lord Himself wanted in His own will to pass over but which the Father decreed that He drink by His own preordained mandate. It was with and by this cup that Satan – whom God the Father in and by various constraints and means {Job 1:1-12} grants a certain freedom of action to carry out His ultimate will – mocked Christ and tempted Him to pour out and instead “to send his twelve legions and to restore the kingdom to Israel”, a course of action which would have, on the one hand, circumvented His bodily sacrifice on the cross of which would not be fully appreciated by His followers as it was happening, and on the other, proved that Jesus was the Holy One of God sent to raze and destroy the Roman oppressors of the Jews; an act that would have doubtless drawn many thousands to His fold of the house of Israel who were expecting their Messiah to do and to be exactly that.

122. The Garden of Gethsemane is God’s response to the mistakes of man in the Garden of Eden. In Eden, creation witnessed the rousing of the will of man and through his own “free” will choice which, “as free” and thus liberated from “constraint” (whether sovereign or otherwise), can only result in separation from the constraints of Sovereignty – which are put in place for our good – and through it, eventually lead to death.

123. In Gethsemane, God Himself did with His own will what man could not by subjecting His will, as Adam was intended to do, by scorning His own will in subjection to the will of the Father. Indeed, the same serpent with the same wiles visited in much the same way the Second Adam as he did the first. Yet, the Second Adam’s choice to do that which He did not want redeemed the choice of the first to do what he wanted.

124. One of the most illuminating passages in all of scripture comes as a sort of innocuous parenthetical clause in the 15th verse of the 20th chapter of the Gospel of John when, upon visiting the tomb – now empty – where Christ had been laid, Mary Magdalene, unaware it was the risen Lord whom she, in her sorrow, was speaking, “suppos{ed} He was the gardener”. So profound is this sleight of hand by the Gospel writer that it underscores the subtle power of scripture. For Christ is the Gardener of God and the Wise Horticulturist of all things made in His image; Christ with whom the first Adam walked “in the cool of the day”, Christ who is and was the Tree of Life, the vine, as well as the vine-dresser who dressed Himself and, standing outside of time and space, still dresses Himself for our sanctification (not, however, in the sense of His crucifixion). {Heb 2:10, Heb 5:8}