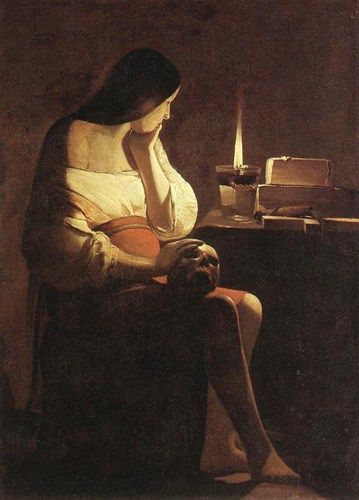 Magdalene with the Smoking Flame by Georges de la Tour

Man’s goodness is not God’s goodness. Indeed, to the degree that a man thinks himself “good”, right, philanthropic, charitable, just, spiritual, acceptable, and respectable, particularly in the eyes of other men (hardly a stable and consistent metric by which to measure) and is affirmed and approved by men for the apparent goodness he displays, will such a “good” man hold commensurate enmity toward God whom he will most certainly reject and despise due to Divinity’s claim as the ultimate arbiter of what is good and right. (For, the domain of morality is absolutely binary, a zero-sum game in which neither side can suffer even the most insignificant compromise with the other.)

Sinners, therefore, are always that much closer to salvation than the good because of the all-pervasive knowledge of their sin which the good do not possess. For, as anyone raised under the shadow of Western Civilization (whose progression through the centuries has until, say, the last hundred years been marked by its moral development) can attest, salvation begins with the recognition that there is, indeed, a certain “evil” in the world and that man is the chief cause and propagator of it. Truly, “no man is good, no, not one,” confesses the sinner. For “good” is a human conception that has no place with God who, though man might call Him “good”, is, in fact, far from “good”, being transcendent to any notion that man might contrive. The man who, therefore, contents himself with his own goodness will naturally despise anyone or anything that might undermine or jeopardize that self-valuation. Good men, as it were, “can never be saved”, insofar as they continue to think themselves “good” and in no need of validation. The world has judged such ones good, God is superfluous.

Indeed, the precarious frailty of the cosmos lies not in the knowledge of man’s badness, nor his capacity for or willingness to do evil – be it to God, or to other men, or to nature – but in and with his goodness; goodness which impedes and prevents God’s actualizing power within the field of physical space and time according to the metaphysical laws that He Himself established.

What need the good of anything, whether in heaven or on earth?

What, then, is the most grievous sin of the modern age but man’s unrepentant goodness, the pitiable source of his every “triumph”, “completion”, and “overcoming”, which is to say, his every mistake, self-deception, and entanglement?

Christ did not come to save the good, the respectable, the reasonable, the sound of mind, and good of sense. A good world does not need saving, it has already saved itself. Indeed, does not our inborn will toward nihilism and destruction survey all the good and respectable things our civilization has accomplished with a kind of barely-repressible contempt and loathsomeness, even a quiet desire for its disfigurement and annihilation?

The carnal man, if honest, instinctively looks upon every good thing with the want to butcher it in hope that such disfigurement might, alas, bring a measure of chaos and perhaps excitement to his respectable pedestrianism. And disfigure it he will, too, if given the opportunity unless he veils the beautiful thing in some sort of virtuous gloss. Does not the last 150 years of our civilization’s own beautiful history not prove this inclination time and again? Did not the European continent, prior to the Great War, from noble to common, everywhere long to arson the wondrous peace, trade, and prosperity with its unmitigated freedom of movement of people and ideas that the Victorian Era, by way of its sublime morality and unassailable virtue, had achieved? And does not that same longing now afflict our bored and listless hearts as well, notwithstanding how good, scientific, agreeable, and enlightened we are?

The evil man who knows he’s evil, perhaps paradoxically, tends to desire little evil upon others. (I emphasize the word “tends” here.) For such a one, being well acquainted with evil and no doubt harassed and harangued by his own personal demons tends not to willingly desire that evil is proliferated among other men. Not so the good man in his precarious protection and meticulous bolstering of his irredeemable self-deceit. To him, there are no lengths he will not go to maintain the happy veneer of the family of lies his soul claims lineage.