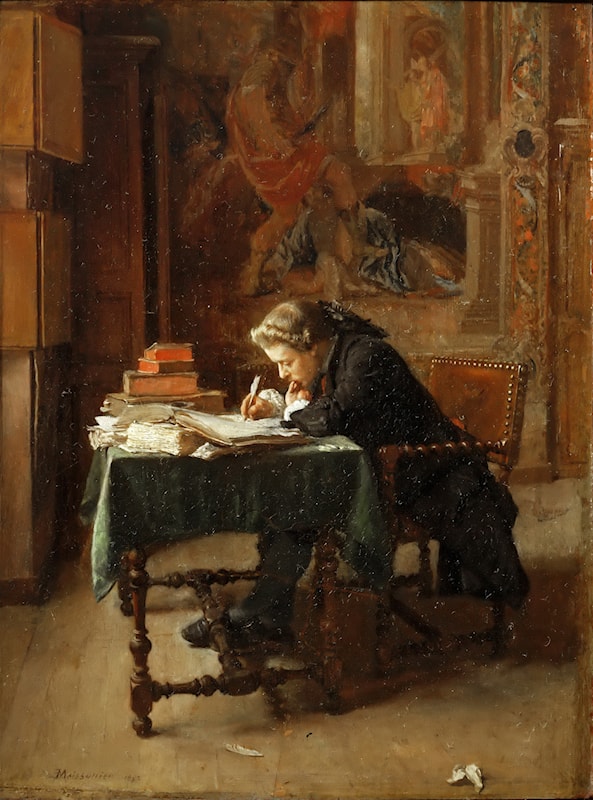 When a writer forsakes his craft for a protracted period, “craft” here meaning the attempted transcription of the unactualized “things” that lie as mere potential upon the delicate epidermis of his heart (not merely the mucosa of his mind), the inertia that results from this accumulated inactivity is often so great that it utterly paralyzes him from embarking upon his next literary adventure. Whenever he seeks to reverse this inertia, to the extent his literary skills have atrophied due to neglect, he soon finds that the labyrinthine, unwieldy, amorphous, and disintegrated “strands of thought” render it almost impossible for him to begin at all, save for plodding, ineffectual attempts to get any ol’ damn thing to move in some sort of direction, whether productive, profound, or otherwise.

To rightly view history so that one might actually begin to apprehend and quite possibly “learn” from and be thus augmented by the apparent truth of its lessons so as to not fall victim to the erroneous notion that “this time”, which is to say, the underlying phenomenological material of “one’s own time”, is uniquely different from that of any other period upon the spectrum of history, one must not be lured into the equally erroneous notion that all men everywhere “thought” or “will think” in the same manner as he. Indeed, while the substrate upon which man acts, reacts, thinks, and interprets does not change (for, in the realm of language, there is, of course, “nothing new under the sun”), his conscious sensitivity to such things most certainly does, man’s quickening or deadening to the words that populate his surroundings which is in constant and often profound flux, not merely from day to day but generation to generation and certainly, age to age.

The beginning of all wisdom is realized when one surrenders to the possibility that, not only did men of the past not consciously “think” in the same manner as we do in the present but, in fact, did not possess the same accumulation of linguistic history (which is the basis for thinking) as the present in the first place; man’s linguistic architecture, just like the buildings he has built across the ages, which is reinterpreted and built upon, expounded, refined, and sometimes “improved” from generation to generation and people to people based upon a given generation’s position on the spectrum of consciousness, this spectrum which can best be thought to vacillate its center of gravity from, what I have described as, “god(s) to man and man to god(s)”. I would venture to say that if a modern human was transported back in time even 200 years, let alone 500, or 1,000 or 2,000 or 4,000, it would be utterly impossible for him to coherently communicate with those particular people who inhabited these different epochs, not only from the perspective of divergent values, but also from the perspective of conscious self-awareness, inasmuch as the development of consciousness – which is “simply” man’s ongoing relationship to and with his perception of words and their associated meanings – has far outstripped and will continue to outstrip all over forms of progress, be it biological, societal, technological, and so on.