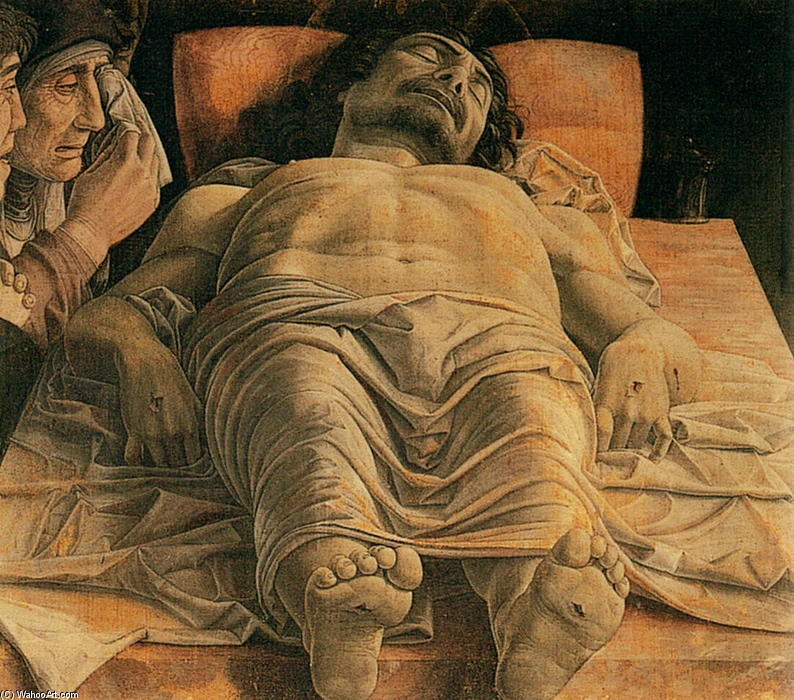 The Lamentation over the Dead Christ, Andrea Mantegna

The line between honesty and disgust, particularly self-disgust, is so impossibly thin as to nearly be imperceptible. Indeed, is not the reason one might resort to so-called “truthfulness” in the first place – if ever a man resorts to it at all – because he eventually reaches a point of such overwhelming disgust toward himself, his highest values, God, and the lies of others such that Truth, ruthless as it so often is, becomes his only option with which to purify the debauched filthiness that precipitated the self-disgust from the start?

That so few people are actually “truthful” about anything indicates either how happily deceived modern man is with himself, or how thoroughly each one of us is medicated through the glib narcotics of equal parts distraction, frivolity, triviality, and sensuality.

The so-called “will to” truth is simply the Materialist’s way of saying the “spirit of” truth, insofar as the philosophical notion of the term “will” has, from Schopenhauer through Nietzsche and onward, been miraculously shorn of its supersensual qualities so as to render “will” more palatable and digestible to the queasy constitutions of Materialists who can never cede a single inch of philosophical ground to any notion which might exist beyond the body’s own sensually-reductionist tendencies. Regardless if either “will” or “spirit” is employed, both forever yearn to disfigure the image of whatever highest value a man might hold dear, that image which, in no uncertain terms, is his own personal god; the disfiguring act which, it can only be assumed, is the manifestation of Truth’s desire to ventilate its ferocity against the lies and deceptions of man and by so doing make itself “known” for and as “what it is” with the result that whatever false image that has been hitherto idolized in the heart of man, despite how wondrous, lofty, congruent, grand, lovely, powerful, and loving such an idol seems, might be revealed for the flimsy and ineffectual apparition that it undoubtedly will be in actuality, insofar as all things created by either the mind of man, or the will of man, or the hands of man, or the collective efforts of man are doomed to unavoidable falter, failure, and death.

Here, Nietzsche was indeed correct when he proclaimed that “God is dead”, and, further, that “we have killed Him”. Yes, the false image of the European God whom eighteen plus centuries of European thinkers had developed and refined to the point of complete and utter sterility and ineffectuality had most certainly died when brought before the court of Reason, unable as he surely was to offer sufficient proofs of his own self-evident effectuality against the scrutiny of the empirical facilities and science. This “God”, this “European God”, this “Reasonable, Rational, Sublime, and Articulate God” was “merely” an idol who had stopped talking and eating the sacrificial food of his worshippers many centuries before, that same false imagine whom I had also once worshipped until my own Spirit of Truth, like Elijah, called down fire upon the sodden bulls of my past inauthentic life with all its gestures of “sacrifice” and “austerity” which were little more than my own pitiful cries to be known by and to truly know Him whom I did not realize I was seeking in the first place; the Spirit of Truth which then turned against my babbling and incoherent mutterings and had them all slaughtered before the One True God who, in no uncertain terms, will not suffer being relegated to “mine”, “my” or “yours” for any serious length of time, save for those tragically brief, ineffable, and intermittent moments when I, so thoroughly embraced by Him whom I am only now beginning to know, perceive no distinction or differentiation whatsoever between “me” and “Him”; moments which, of course, must be brief and intermittent. For to linger too long in such an indescribable embrace as that which comes from an actual encounter with the Creator of the universe naturally obliterates the differentiation between the Subject and the Object which enables the perception of such an embrace in the first place; differentiation which is bodily life or, in other words, simply “life”.

Having known until now no other life than the one I find in this body, I am, despite the loneliness and alienation that the body often forces me to endure, nevertheless grateful for life, brief and troubled as it is, for through it I am – at certain rare moments of ecstatic joy or intense emotion – able to also experience the unmitigated vulnerability of a “supersensual life”, the mere glimpse of which enables me to embrace the life I live in the body with the enthusiasm and vigor that it demands, never mind how easily my grip fails and arms tire.