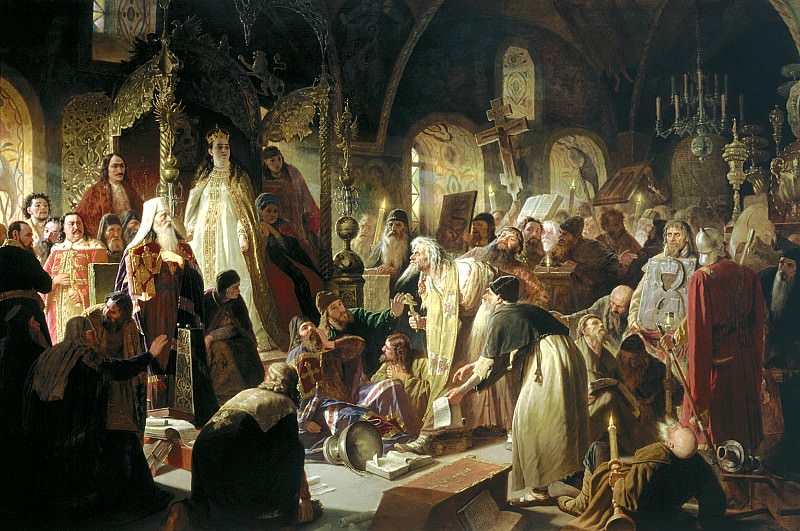 Dispute on the Confession of Faith, Perov Vasily

God is not merely “found”, or else “most clearly revealed”, in Offense, but, to Reason, He is the epitome of Offense: God whom the carnal mind, the “reasonable”, “rational” mind, in all its symmetrical synchronicity, can never hope to grasp even the barest fringe of His garment. For what is beautiful to man in the fullness of his pristine mental lucidity is putrid, dead, diseased, and disgusting to God – not that such things are disgusting in and of themselves but that, given how far the east is from the west, or else “His ways are from ours”; God who makes pale, faint, and diminutive every sensual perception of man that might pretense to recognize so-called “beauty” or “Truth” in the first place.

Offense is to the thinking man – of whom we all are to a greater or lesser extent – what the Jordan was to the cloud- and fire-led Israelite. And just as the pillar by night and shade by day guided the groaning, grumbling listless Hebrews through the wasteland of “what is”, so too man’s Reason provides the same light, shade, and terrain to guide the immature, sleepy, and carnal man to the end of their wits and untenability of their senses.

“But when the perfect comes, the partial passes away.”

Until now in the West, thinking men have roughly considered Reason to be the perfect – or at least perfectible – paradigmatically enframing mechanism in man, while Faith has, at best, been considered the partial, imperfect gaze “through a mirror, darkly” that has little to no value with regards to “what is” supposedly “true”. And while this might be an accurate assessment for the apprehension of “what is”, Reason at the same time provides zero utility for the apprehension of “what is not”, of “what cannot be”; “what is not” which precedes Reason, experience, the senses, and the body of man by an incalculable distance, surrounded as such things are by an uncrossable chasm which is guarded by the imposing sentinels of doubt, ridicule, incredulity, cynicism, and finally, Nihilism, the latter which, because Nihilism does indeed delineate the furthest bounds that man’s Reason is capable of “apprehending”, seems to man’s “reasonable” faculties to be the oldest and most primordial “first principle” from which any and all others flow and will inevitably return.

Man’s Reason, then, if followed along the only road it can toward the sole destination that every waypoint of philosophy and its innumerable offspring ultimately directs is doomed to be metaphysically unraveled by the teleological inevitability of Nihilism, that which eventually renders all things useless, worthless, subjective, perspectival, contextual, and utterly devoid of ultimate value and transcendent significance.

Nihilism, looming always over, stalking forever behind, and proceeding before every carnal inclination of the mind of man, is the perennial terminus of man’s Reason. Nothingness is the sole destination that any honest thinker can and should expect his insights in every way to end. For Nihilism is indeed the flaming sword that patrols the eastern gate of Eden whose sole duty it is to immolate Reason with the revelation of Reason’s implicit nothingness and incapacity to “perceive” anything beyond itself.

Nihilism is true for that which “is”. This cannot be negated. But Nihilism is also “merely” the lapping shoreline of the vast expanse of “what is not”, that which can, of course, only be ferried by the ark of Faith – unreasonable, irrational, unstable, unfathomable, uncontrollable, and incomprehensible as Faith undeniably is; that kind of Faith which does not derive from man but is indeed a gift of God.

Seen in this light then, Christ – who, the same today as He ever was, is both the stumbling block for the Jew and foolishness to the Greek – should be considered the embodiment of Reason’s Nihilism and even the essence of Nihilism itself, at least from the perspective of Reason; Nihilism which is Reason’s unavoidable end and eventual self-immolation and negation. In much the same way is He indeed the door before which one must surrender their Reason in order to pass; Christ and the Offense that He engenders which are both the start and end of the treacherous sea of Faith upon which we are called to walk as if the ark of God, no matter the clime or storm, the revelation of which is, of course, not born of flesh and blood nor can ever be.