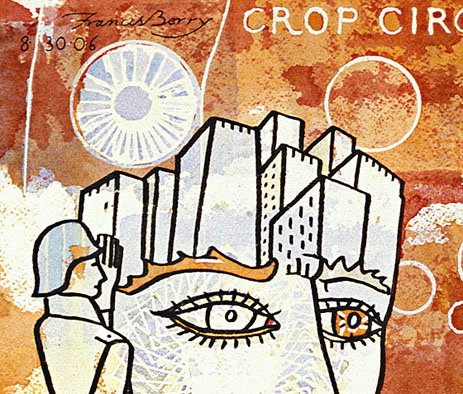 The dialectical tools by which Reason typically moves about the reality it creates and expresses itself should never be trusted to lead a man toward the non-linguistic domain of Faith, let alone to successfully navigate therein (if such was even possible in the first place). Because, if Reason’s dialecticism can supply a “for”, it can and inevitably will also supply an “against”. Such perpetual antinomy with itself is the nature of Reason and is indeed the means by which it actualizes itself and thereby creates everything that “is”.

As to the tools by which Faith “expresses” itself, the rational mind cannot, unfortunately, ever “know” with any sort of confidence. Indeed, it would be utterly foolish for Reason to even try.

In the linguistic absurdity of Faith does man, at last, find his “rest”, which is to say “his only abiding sense of return”; return to “home” and the sole sense of enduring “belonging” that might be at all capable while man still labors under the empirical tyranny of his body. What this feeling of rest “is”, however, cannot be expressed by and through the linguistic tools of Reason, at least not accurately, concretely, or definitively, save to say that the feeling of return is inexpressible or else, “incomprehensible”.

For Reason is not merely a mechanism that alienates man from his essence (should he have one), the totality of the subjective experience within which Reason expresses itself is itself a form of alienation – a severing, a cutting off, and throwing away of anything that might insinuate a certain “communal” expression, the first and most palpable feeling that results from Reason which is the loss of connectivity to others, “the world”, and God, which is to say, one’s “home” or “place” of implicit belonging; “belonging” which is the existential grounding in and of the knowledge that one is completely and nakedly “known”, raw, vulnerable, and existentially defenseless, bereft of the “walls” that Reason autonomically builds so as to make itself known even at the expense of the implicit needs of the one who does the reasoning.

The problem that contemporary philosophers should have with “Postmodernism” is that, if such a paradigmatically-enframing cultural phenomenon can be roughly described as “an incredulity toward the overarching-ness of all-encompassing, overarching meta-narratives”, and further, “the breakdown of such meta-narratives into distinct, lesser narratives” that are each governed by their own legitimate linguistic structures and rules and are engaged in their own legitimate linguistic discourses, with no discourse any less legitimate or any more encompassing than any other insofar as each discourse stays within its own linguistic “lane” and seeks not to exert its legitimacy or primacy above any other discourse and thereby resurrect the meta-narrative “presumptions” of the past, the philosopher’s role as an elucidator of such meta-narratives is completely taken away from him.

Philosophers are wholly and completely engaged in and with the task of identifying and enunciating cultural meta-narratives, not only for the generation in which they live but, importantly, for those that might come after.

Postmoderns claim that ours is a generation predominated by “an incredulity toward the overarching-ness of all-encompassing, overarching meta-narratives” which is, of course, its own overarching meta-narrative claim, if only in the negative. From a certain perspective then, this claim becomes unavoidably self-defeating – no, self-cannibalizing – and is, therefore, philosophically untenable and unacceptable; untenability which necessitates that a new definition of what might be considered “postmodern” must be made by the efforts of philosophers so that humanity might shuttle past such postmodern contradictions, however “true” and “historically relevant” they might be; movement that might just propel intellectual and cultural history forward to some different waypoint than the one we are currently loitering.

It has also been said that postmodernism, because it gives equal, legitimate grounds to every form of discourse, legitimizes the discourse of Faith and by it, religion, even the Christian religion. But here I take issue primarily because Christianity is – in its own words – a meta-narrative that in every way seeks to establish itself as the most essential and indispensable discourse, the “lowest common denominator” by which all “things” – whether material or not, whether of this world or not – might be effectively reduced; Christianity which in every way posits itself as creation’s “master narrative” and by its own reckoning cannot peacefully co-exist alongside any other form of discourse, never mind how “legitimate” the age might render Christianity’ opponents.

Such is why postmodernism, insofar as it is understood by the aforementioned definition, is not only doomed to fail but to be completely transitory and temporary once its destructive unworkability is realized by those who recognize such things in the first place. Concerning this, we appear some years distant.

For though we might think and reason in a postmodern way, we cannot conclude anything “postmodernly”. For, any conclusion that might be derived from such a paradigmatic methodology would negate the essential qualities of postmodernism completely.