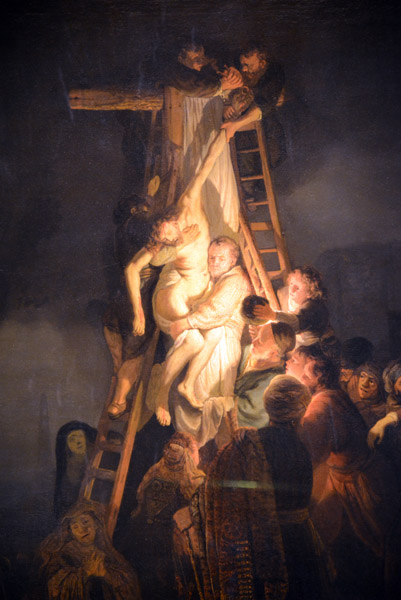 Descent from the Cross, Rembrandt

From the “perspective” of Faith (should it even have a perspective at all), Reason and the aesthetic grounds by and through which it “reasons” are absurdities, futilities, completely impractical, and utterly fruitless psycho-linguistic exercises that only a hopelessly myopic, finite, delusional, existentially desperate, and aesthetically impotent fool would be willing to suffer for any sustained length of time (in other words, what only man could continually pursue in his ignorance). Faith, on the other hand, insofar as the domain itself renders impossible the particularization of any single “thing” that might seek to “know itself” as a particular “thing” with a particular perspective within its domain, is in no place to render any sort of subjective judgment or valuation against Reason.

For only in Subjectivity can there be judgment – and with judgment, also value. Not that this judgment and the values it elucidates are truly and eternally valuable in and of themselves, for they cannot be. No, such judgments, insofar as they originate in man and are thus particular “parts” of him are, as parts, incapable of achieving universality or attaining an ultimate value over the whole.

Indeed, values, if they are to realize the ultimateness that they long for and, in fact, cannot be considered a “worthy” value without, can only accomplish this ultimateness if it is decreed by some outside force, some external entity, or independent deity that exists apart from man and his subjectifying tendencies.

For man and his world is a closed system.

All of this, I realize, is an unsynthesizable paradox. Because, to achieve the particularity required to first judge and elucidate values from one Entity (who in our case has hitherto been considered God) to another (man), that Entity would first have to become subjective and be thus capable of judging and decreeing said Entity’s subjectifications which would thereby preclude the Entity from the objective domain of Faith from which all value originates, insofar as Faith is apart from and alien to the linguistic limitations of Reason by which man  believes he knows himself as “man” in the first place.

Faith is that which cannot be encircled or enframed.

Reason, on the other hand, not only enframes but is an enframement.

Faith and Reason are nevertheless mutually dependent upon and, in a certain sense, “responsive” to the workings of the other and, as such, achieve their unique qualities only in light of their opposite. Thus does Faith, which is necessarily boundless and formless and, in this sense, utterly chaotic compared to the apparent orderliness of Reason, also encircle the whole of Reason, and thereby everywhere delimit Reason’s most far-reaching implications, insinuations, and creations by highlighting that which Reason does not know nor ever can, no matter how hard Reason reaches and tries.

Faith, then, in its totality, can be visualized as a circle; Reason a line. Or, at least Reason will appear to be a line to we so tyrannized by the myopia that subjectivity necessarily forces upon us insofar as Reason requires for its aesthetic actualization a certain intensity of focus and brevity of action to complete a task or else, to actualize a teleological goal.

Faith, however, can never be a line, not even if our short-sighted perspective perceives its unfathomable scale as such. No, Faith by its very nature resists all particularizations insofar as man might endeavor to approach Faith on its own grounds and according to its own paradoxical demands. Man, of course, does not have to respect such demands and indeed seldom, if ever, can or will without the grace of some exterior assistance that might enable him to attain the requisite perspective; the loftiness of which, in a certain sense, could be considered “no perspective at all” but whose towering altitude nevertheless grants him a broad and deep enough vantage to see Faith for “what it is”, however impossibly paradoxical the vista.