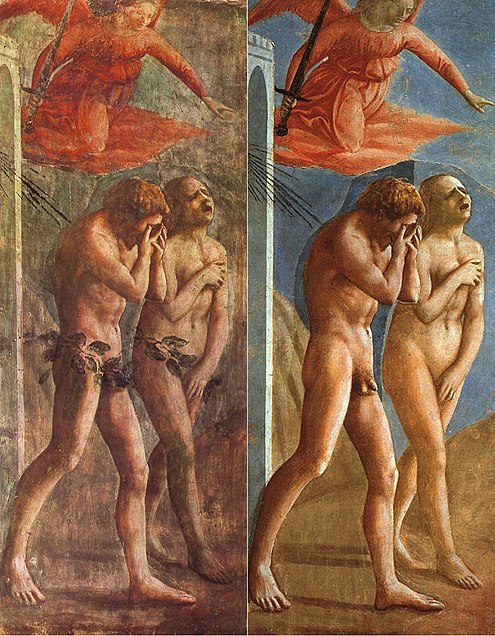 The Expulsion Of Adam And Eve From Eden, Masaccio (restoration)

126. If Christ is the Second Adam then who is His Eve but man, which is to say, “His own bride” who was and is, like that first woman, foiled by the wiles of the serpent and led astray by her own lusts to take from the tree and eat and later, to give to her husband; that first Adam who is and has always been made in the image of the Son and charged with carrying out the duties and responsibilities that would later be fulfilled by Christ Himself; Christ’s “second” fruit which in every way was the cup of suffering He chose to take in the second garden and who, as our perfect High Priest, “in every way was tempted as we, yet without sin” {Heb 4:15}, drank on our behalf, but, as sinless, satisfied the wrath of God when He “made Him who knew no sin to be sin for us, that we might become the righteousness of God in Him” {2 Cor 5:21}; God’s holy wrath which had been accumulating since the days of Eden, fully satisfied when He, in His good pleasure, crushed His Son. {Isa 53:10}

127. It should be noted that it was “not Adam who was deceived, but the woman who was deceived and fell into transgression.” {1 Tim 2:14} But Adam, because of his profound love and devotion for and to his Eve whom, upon knowing (perhaps a little) of what might become of her, coupled with the fact that she was his wife with whom he had a covenantal responsibility divinely commanded by God, in that love of which we moderns know not of, chose to die in his sin and disobedience than to spend eternity separated from her (this being the last free will choice man ever made until Christ). If this is not the image of the Son’s relationship with His bride and the unimaginable love He has for her, I don’t know what is.

129. The responsibility of and thus the consequences for the fall of mankind fell on the man, not the woman, even though it is she who first transgressed; just as the responsibility of the reconciliation fell on Christ (who is our “man”), {2 Cor 5:11-21} and not man (who is Christ’s “woman”).

130. To claim that Christ is a “good” ethical teacher – even the ethical teacher of humanity par excellence – apart from the impartation of the understanding of such by the Holy Spirit is the apex of ignorance and indeed betrays not necessarily a lack of understanding as to what constitutes a “great ethical teacher” but, moreover, shows that the claimant has not really read the gospels (specifically, the sermon on the mount) and, if read, has in no way properly understood them.

131. As it is, from an “ethical perspective” – that which is wholly concerned with horizontal human relations among men – the demands that Jesus lays at the feet of His listeners are not only preposterous (equating, as He often does, the mere mental indulgence of the fantasies of the eyes with actual flesh and blood adultery {Matt 5:28}, among much else) but completely impossible for man to carry out. Indeed, I suspect that the ignoramuses who make such claims do so out of the flaccid, superficial fact that Jesus says the “meek and lowly will inherit the earth”, {Matt 5:5} which again, apart from the intervention of the Holy Spirit is, in the sphere of men and reason and power relations, not only false but utterly nonsensical. I further suppose that these claimants will be the same ones who give equal credence to the teachings of Buddha and other such Eastern, world-denying mythologies, but only in accordance with their groundless sentimentalities.

132. No, Christ is not an ethical teacher but indeed a more ruthless and exacting judge than even Moses; Christ’s law which can in no way be followed in and by one’s own flesh and is, in fact, utterly absurd to even attempt.

133. Christ began His ministry by preaching a sermon from a mountain, just as Moses brought the old law from the mountain and there consolidated the Jewish people as such for the “first time”. Christ, on the other hand, deliberately tried to alienate His hearers by burdening them with heavier moral weights than even the law of Moses.

134. Man apart from God has the freedom of will only to do evil thus, presented with no other freedom divorced from God, is no true freedom at all.

135. Only God, as the one true sovereign Lord in all the cosmos has true freedom of will to do what He will and so He does for His great glory.

136. Man without a sovereign authority has no authority at all but is, in fact, a pretender to and usurper of the throne of the one true God and King.

137. To equate Christ with Buddha is the lowest depths of depravity, blasphemy, and outright stupidity that one can ever surmise.

138. Only those who reckon the Judge and Justifier of all humanity as weak and sentimental (so common in our sensual age tyrannized by the decadent senses and all their many sentimentalities) will think Him a wise and ethical teacher. No, apart from the Spirit, Christ is unreasonable and impossible, even exacting, unbending, and ruthless.

139. If I was to ever see Him in this life would I, as the prophets and holy men before me, fall on my face in terror for my uncleanliness and hidden sin.

140. Ages of Reason always witness the overweening rise and tyrannical control of Reason over the horizon of all that “is” and “might be” with a comparable rise in the belief in magic and the occult to the degree that Reason so overweens the domain of Faith. For the common man instinctually searches for some sort of stable rational basis and authoritative source for the laws of reason which are always in front of him yet are very far from his understanding; that understanding and those laws which he somehow knows are incomplete, imbalanced, and thus ineffectual with regards to the apprehension of Truth.

141. So it was in classical Greece as in 19th-century Germany as it is today. The occult does appear to be manifesting everywhere in our midst, even in many so-called “churches”, often in subtle and nuanced ways that go undetected by those who have been entrusted with the defense against such heretical assaults.

142. The occult proclamation which espouses the most pernicious affront to the Truth of God states: “you through your ‘God-given will’ are the creator of all that is; you are thus the ultimate arbiter of your own health, wealth, social standing, and further that, your ‘own’ words speak ‘what is’ into being.”

143. The above blasphemy is, of course, the metaphysical foundation of all magic, sorcery, and witchcraft.

144. This superficial metaphysic is indeed the essence of the new, mass world religion sweeping the globe today, made possible by the so-called “world wide web”; this religion which is again espoused by innumerable apostate “seeker-friendly” churches, all of which are endorsed by the secular temples of commerce and finance who conflate the whole goal and purpose of the cosmos with a kind of flabby, impotent sentimentality (or worse, monetary gain); those churches and temples which stain literally everything with their sentimentality, even the holiness of a righteous and wrathful God who will one day avenge His elect which is, indeed, a tiny remnant on the earth today, as it has also been.