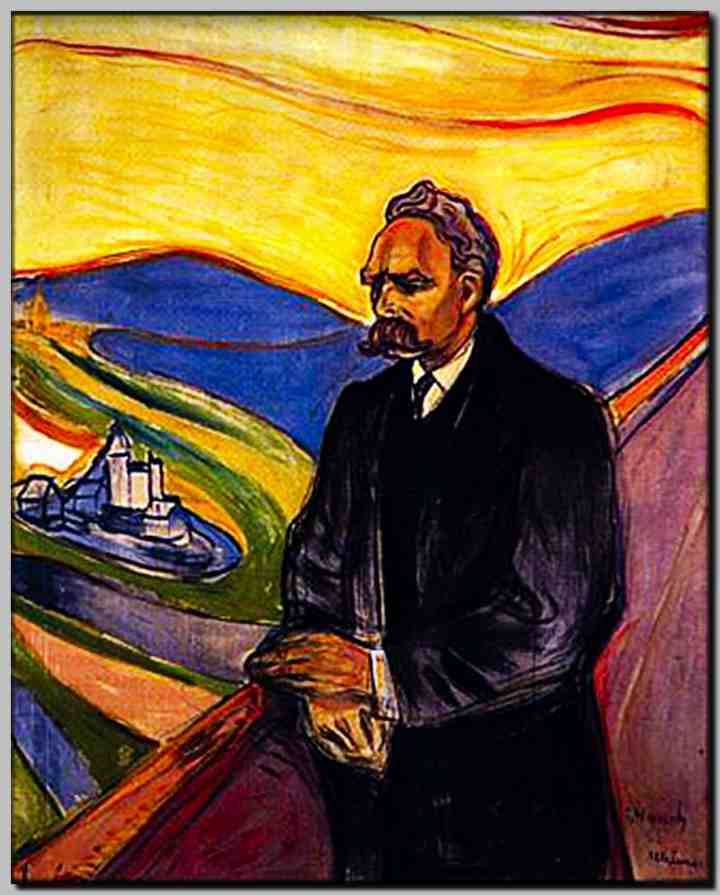 How is it that I can so easily and even callously relegate that problem, that Problem of all problems – namely, the Problem of Evil – which has so beset and tormented the greatest minds, to more or less insignificant regard? Not that the problem of so-called “evil” is not grave and serious, earnestly warranting our sincere attention. For I believe it certainly is and does, but I also see no contradiction in the fact that though this world was ultimately created by God for God who can only, as God, be considered “good” and nothing besides (an affirmation that even Reason, as God’s opposition, cannot keep from also confessing), but that there exist things in and of this world which are so everywhere obvious and unanimous to everyone but the most deranged psychopaths to be “bad”, “evil”, “wrong”; valuations which are attested and affirmed as such no matter the degree to which one might be tyrannized by the lies and manipulations of one’s short-lived culture and myopic society. Examples of evil: incest, as well as patricide, matricide, deicide, infanticide, adultery, theft, willful deceit, murder, rape, usury, perjury, and so on — never mind that some of these have acquired legal sanction in “The Modern West” – The Modern West which has existed for so short a gasp on the timeline of history that our brevity could hardly be taken as the rule for all time and all places.

That our legal landscape has changed and thus forced whatever values it implies upon the minds of those who must obey its dictates says nothing whatsoever about the plumblines of those particular articles which might constitute “evil” but that, to the degree we have deviated from these long-established plumblines demonstrates how far our civilization, along with its values, and the values of those who compose its ranks have deviated from those of “general and historic humanity”, or maybe better said “the Better Humanity”. Now, of course, howsoever one views humanity will dictate one’s bias toward that “Better Humanity”, but no doubt even here there are certain values that appear to constitute this better form of human nature; constitutions which – though they might not ultimately be transcendent and eternally “Truthful” – humanity has nevertheless apprehended, delineated and affirmed as “enduringly true” throughout the broad swath of man’s history as man; values such as courage, bravery, self-sacrifice, mastery, discipline, dedication, honesty, sincerity, diligence, and perseverance despite the odds, despite one’s “better judgment”, despite one’s good senses, despite common sense and the common, prevailing values of the place, time, and conditions of one’s being. Detractors might claim that something such as self-sacrifice is untenable under certain conditions and from a certain perspective, and it can always be said that self-sacrifice cannot be expressed indefinitely otherwise the self-sacrificer would eventually sacrifice themselves through sheer exhaustion, but in the accusation that self-sacrifice is untenable, indeed, in the very questioning of the irreplaceable import of the value of self -sacrifice itself, there is a quiet recognition of the vitality of its incomparable position within the value hierarchy of man.

In Reason, there can be no apprehension of Truth, not in its totality and ultimateness. But there can, as with all things, be at least a vague glimpse of the afterglow of its glory, that vague glimpse which is not really vague and not really a glimpse, for it cannot be anything at all if it does begin and end in the transcendent domain of Faith which is itself wordless and formless to the coherence of Reason.

Further, in and with the emergence of the knowledge of good and evil there necessarily arose a certain phenomenological duality – if that’s the proper term – in that the then-emergent Reason witnessed a bifurcation with and from the wordless, mindless Faith which had until then dominated not only man’s nature, but nature’s nature as well.

The awakening of Reason in man awoke also an irrepressible duality in the nature of nature, in all things that are, that they are, and in things that are not, that they are not. In this dualism there can be no compromise: things either are, or they are not. “Things” cannot both “be” and “not be” at the same time. All the same, Faith and Reason, as the respective domains in and of which “what is” and “what is not” respectively dwell, have no commonality whatsoever, nor can the “things” that might be “found” in each particular domain be even remotely assumed to have any sort of direct, accurate, and true reflection in the other. Within the paradigm of dualism, “Good” has no business with “bad” and “evil” has no association with “goodness” – only that they are opposite and utterly opposed. This dualistic conception, however, while it can be quite easily understood by Reason and even elucidated by Reason, in its purest expression – as conveyed, for instance, in the writings of Nietzsche – will outright deny dualism as a matter of principle and thereby deny God, the domain of Faith, and anything that else that might “exist” outside and independent to Reason. Nietzsche’s writings appear to be the purest embodiment of Reason unrestrained by and untethered to Faith its necessary and inextricable opposite, along with all the many implications that arise out of such ruthless self-awareness and disdainful self-consciousness. For Reason, in order for it to fulfill its implicit role as Reason – which is to say, the lone and final arbiter of “what is” – will offer no quarter whatsoever and spare not a single errant thought that may concede the possibility that there might be “things” beyond it. Indeed, Reason, when it is expressed in its truest form, emphatically denies metaphysics and God as well as Truth, ultimate Values, and any Will behind the Will to Power. The truest and most enduring revelation that Reason is able to utter can merely confess that the Will to Power is necessarily purposeless and aimless save for the expression of more Will and greater feelings of loftiness and superiority. When Reason itself speaks there can be no Truth, no ultimateness, no transcendence, and no omnipotence beyond itself which, as arbitrary and aimless as Reason inescapably is, leads only to nihilism.

Reason, therefore, cannot conceptualize a “time” when it did not exist and hold ultimate sway over reality, even if that “time” seems to predate the emergence of man. When Reason speaks of time in impossibly long lengths – insofar as Reason is, of course, aimless and purposeless – such “time” will always resemble a circle, an endless cycle that eternally returns to repeat the same things as before and always ad infinitum.

Such is why the writings of Nietzsche – in the light of Faith by which Reason is made possible – are utterly wrong and hopelessly inaccurate with regard to Faith and the power of the Spirit of God (which, because of the nature of his confessions, obviously did not reside in him). Yet, at the same time he is more or less completely “right” and no less “total” with regards to all the many implications that may spring from the purest expression of unrestrained Reason. Because he spoke so ruthlessly, uncompromisingly, poetically, and profoundly about the nature of the things that “are”, he must be regarded by any thinker – whether of a theological bent or not – as central to contemporary humanity’s understanding of Reason. For he also expressed that man should embrace of Reason and life in light of its nihilism, and he detailed all that such an embrace might entail, e.g., the requirement for great men to revalue values so that they might be better able to embrace life with all its highs and lows and pleasures and pains as antidotes and beneficial tinctures to life’s otherwise humdrum monotony, and to affirm nature and science and technology which – as products of Reason – help to ground and support Reason. Further, because of the necessity of God or a “savior” or more perhaps a more earthly “hero”, which is to say, “one we can collectively look up to and forward to so as to orient our actions in a productive direction”, looms so large in man – particularly Western man – Nietzsche’s notion of a salvific figure will, of course, be a great, overweening inescapably human yet “superhuman” personality who possesses every human quality which might allow for the expression of the will to power but in far more abundance, nuance, and creativity than others, whether that power expresses itself in poetic, bodily, mental, scientific, political, or social terms. This hero will, however, as an embodiment of Reason, be devoid of any “spiritual” implications at all.

Nietzsche’s then was an anti-dualistic ideology – which is perhaps why he had so much trouble with Plato and Socrates. Nietzsche’s philosophy could more aptly be reckoned as an anti-dualistic “theology”, one whose God was the earth, man, nature, and all that such might endeavor to express. And express it, I believe, he did, and did so profoundly and elegantly.

Yet, those who have been elected by the Spirit and thus speak by the power of the Spirit will – if such ones even read Nietzsche (which I think they should) – inevitably say, “yes, but…”