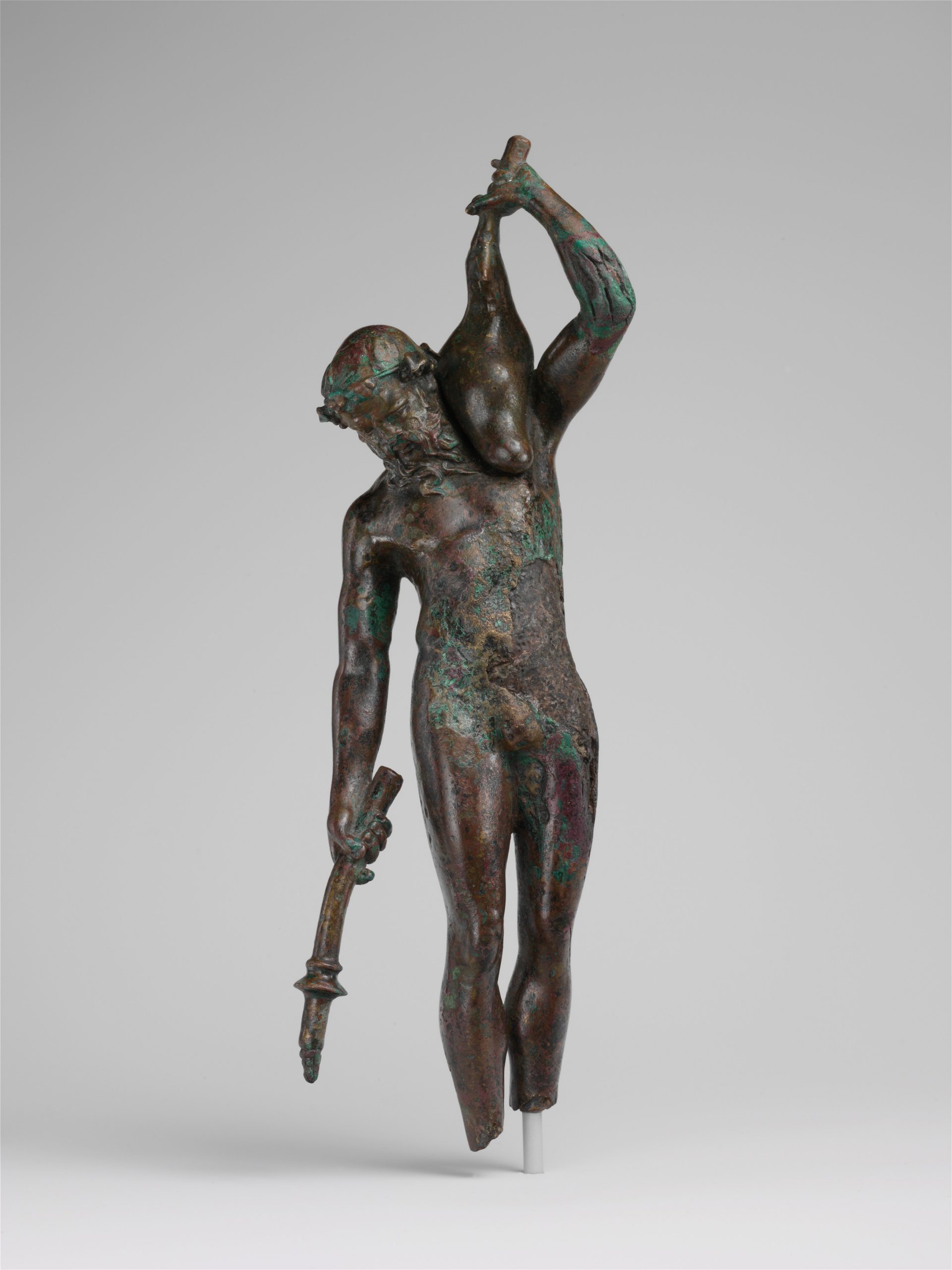 Satyr with Torch and Wineskin

True mastery of an art is evident when the mechanics of the craft itself recede to the background and become little more than a beautiful though quiet and unassuming accompaniment of and to that Force which has possessed the artist. What’s more, not only does the craft recede but also the artist himself, which is to say, “his will and hope and want” for the work at hand.

Indeed, I’m conscious that I’m at my best when I’m only vaguely aware of what I’m talking about and have little to no idea where any one piece or larger body of work might end, even less how I may get there. Such a self-unaware state can only come from he who is, indeed, mature in his craft and secure in his ability to enduringly maintain its unfoldment so as to “shepherd” a work to its completion without really knowing where to head from the start.

A single instance does not establish a rule, no matter how overwhelming the one-off.

As I have said elsewhere but feel continually provoked to reiterate: the chief deceit and most grotesque ignorance repeatedly demonstrated time and again by the world’s most esteemed minds and most illuminated emissaries of intellect is their readiness to assume that (1) the general theory of evolution and all that it might entail is essentially true (evolution which posits itself as a series of near-accidental leaps from lower to higher, simple to complex) and, along these same lines, (2) that all men at all times have more or less thought, perceived, and reasoned in a similar if not exact manner than we do presently. In short, that the machinations and underlying processes of Reason have not significantly evolved or changed, only the products of knowledge produced by such machinations have changed, or at least the way we interpret such things. It naturally follows then, that since we moderns presumably sit at the bleeding edge of evolution – specifically, the bleeding edge of the evolution of consciousness – ours represents the most illuminated, refined, thorough-going, and advanced form of thought that the ages have yet produced and, further, that people of the past and all their creative efforts represent a stunted, ignorant, naïve, brutish, bigoted, and far less sophisticated form of thought than our own, largely because they did not possess the advancements of so-called “modern science”; modern science which, in my estimation, is so pervasive, assumed, and tyrannical that it so clouds the every thought of modern man and, by it, establishes itself as the ultimate arbiter of “what-is” for all time (“our time’s” arbitration of “what-is”, of course, being so much more developed, penetrating, and pronounced than it was in the past).

A possible cause of man’s belief in the totality of evolution has to do with autonomic machinations of Reason which are exclusively dependent upon the senses for their expression; the senses of man and the way they perceive which – as assumed by the theory of evolution – have passed unchanged from the primordial ooze of single-celled organisms until now.

Because of the unaltered mechanics of the sensual organs of perception, those which, if they developed at all, only did so in a manner that more acutely accentuated their essential qualities and never contradicted those qualities (for any contradiction would have negated their being in the first place), the horizon of possibility of Reason has also retained its essential form and structure, as have the tools of its expression, even if such tools may have sharpened and become more exacting or sophisticated over time.

Indeed, because the senses do not change – or change so imperceptibly slow that man will have destroyed himself long before one might notice a change – Reason likewise does not change. What “changes” is the accumulation of the products of Reason, or else the products of sense perception, as well as man’s interpretation of such. Thus it is only natural for all Reasonable men, for all scientific, “enlightened” men to view his storehouse of Reason, overflowing as it is with scientific artifact after artifact, as the furthest possible advance of history, and of man, his mind, his technology, and also to view the meagerness of the storehouse of the past which, denied of its own accumulation by the overweening jealousy of the gods who once lorded over such products as necessary backward, poor, stupid, impoverished, and ignorant.

The Reasonable Man, the modern man, cannot, therefore, learn anything from history on its own terms, as a product of knowledge in and of itself, applicable to the same degree today as it was in the past, something worthy which might be useful for not only the dumb and dusty bygone ages but also present times too, as well as all times. I am primarily talking about what might be considered ancient knowledge, the kind that far predated the archaic Greeks who first set Reason and its senses on their unassailable pedestal and sent them on a course for the accumulation of the aforementioned products of knowledge that, of course, still continues today, with only minor diversions and interruptions along the way.

If men of the far distant past thought and “reasoned” in a way fundamentally different to us, the products of their knowledge, if judged from a certain non-prejudicial perspective, will be just as valid and profound as our own, and perhaps more so if the accumulation of their knowledge did, in fact, reach an “event horizon” in which no new products could effectually be added to their paradigm without destroying it. This terminus of their development, if this did indeed occur, means that their knowledge might even be greater than ours — for ours has not yet reached such a horizon.

As to our event horizon, however, I suspect its day is rapidly approaching.

If the above is in any way true, it would “make sense” that the old paradigmatic wineskin would first have to be ripped asunder, usurped, and overthrown, if, that is, the old wineskin was, in fact, bounded and delimited as ours is by the impressions and expressions of the senses and also Reason’s ability to apprehend and integrate such expressions into an overarching narrative. If the far ancient past was more advanced than us, however difficult, if not impossible, it is for us to affirm such an assertion, their knowledge would have had to have been dependent on something different than those senses commonly known to modern man, which is to say, the five usual ones plus the sixth which, taken collectively, can little “prove” the efficacy of the claims they everywhere and in every way purport to make.

The Spirit of God cannot deny Himself.