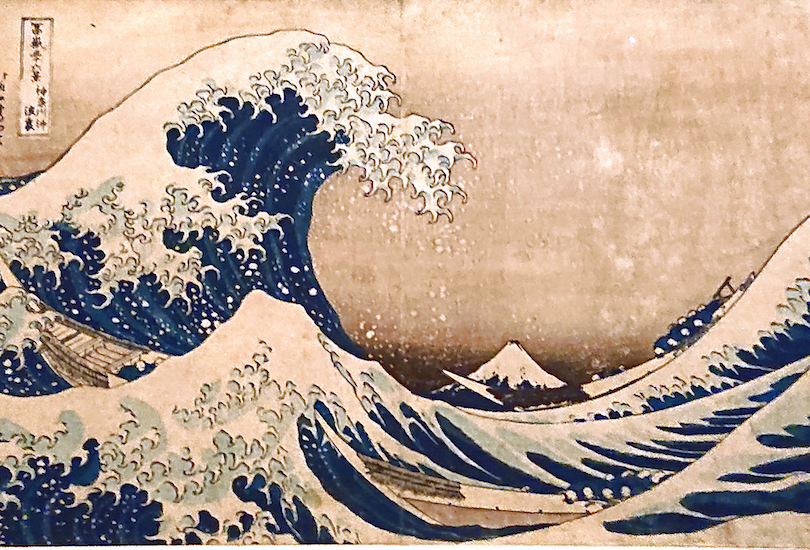 The Great Wave Off Kanagawa, Hokusaki

In my own unfathomable ignorance, it seems the holy “why?” of God and indeed the terminus of every origin within the domain of Faith will always lead – when the glare of sunlit clarity softens and the heart has been stilled the tumult that first set it alight – is Love. Love which is the thematic superstructure and internal trusses that run throughout the entirety of Faith and is in every way that which remains – or should – when a work of Faith has closed a chapter or completed an act in the ongoing play.

If a man is not growing in love, the highest expression of which is witnessed in the sacrifice of the self which, among its many virtues, enables a man to more greatly access the domain of Faith which, as stated ad nauseam, can only be entered when one steps “outside” of one’s own mind, good sense, and right-thinking; Love which is vehemently opposed to good sense, sobriety, and right-thinking, identifying as only it can through the irrationalities of which it uniquely provokes, just how ineffectual a man’s well-meaning sobriety is when it comes to the apprehension, communion, and embodiment of Truth.

Truth is, in the final estimation, Love, and Love — Truth.

Did not the word “hierarchy” from its pre-Greek (most probably ancient Egyptian) origin all the way through the middle ages unto the early modern period mean “god-structure” or “the order and rank of the celestial beings”, those beings which were doubtless ranked according to the degree of their insight and knowledge of the inner mechanics of the kingdom of heaven that they possessed as well as their effectiveness in translating such knowledge to the phenomenological world of man and matter in a utilitarian way so as to give no occasion for any doubt or nascent questioning as to the effectiveness of their edicts to man, their thoughtless slaves; effectiveness which would enable certain gods to rise the rank of the God-Structure and thereby increase their level of “power” — their “will to power” so to speak. For would not their world – if the gods were indeed the consciousness of the cosmos before man – appear in many ways to be similar to our own in that, as Francis Bacon pronounced at the pre-dawn of modernity, “knowledge is power”.

Due to the limits that my own Reason predisposes me to, the gods most certainly had cognitive access to what we might now deem a kind of “celestial science” (that which almost unquestionably became “astronomy” to ancient man, but I digress); a science which was based upon either direct knowledge of the blueprint of God or at least a certain intuition of the “empirical” method for divining such knowledge, their science which would, as it relates to matter, appear strikingly similar to our own.

Further speculating, it was the products of this “celestial science” that they communicated to archaic humanity, typically in the form of how one might obtain and exercise power over others. If the human slave of a certain god could work his way up the human hierarchy by and through the exercise of power that the god communicated, the god would, in turn, expand and increase their level of power in the celestial hierarchy. But even the lesser gods as opposed to the actual Godhead had limits placed upon their capacity for and access to individual knowledge by that Godhead and were restricted from knowing the ultimate will and plan of God through Christ. Such is why when Christ, grieved that He had made man, sought to wipe the human race from the face of the earth by its inundation so as to start again through Noah and his sons, and then proceeded to carry out the divine sentence, that many of the gods (as expressed in many non-Biblical myths) were so terrified that they retreated from earth into the outer reaches of the stars, afraid to return; afraid not of another climatic calamity, of course, but that they did not know the secret will of God and therefore could not continue to rule man with the confidence that thoughtless humanity required.

Conscious self-awareness, just as the senses of man, as that which aids in the creation of the foundational basis of time and thus exists, if anything, beyond time and also around it and delimits the possibilities of time’s perception, is not subject to the laws of so-called evolution and therefore does not change the rules of its logic or the essence of its character or any potential product that might be known through its utilization in any way over the ages. For, if the sensual capacities were to alter in the slightest degree, consciousness, as well as the whole terrain of possibility to include the essence of “what is” would also change, rendering consciousness not what we have for millennia been entrained to believe it is (if anything at all). Any “development” in consciousness, as might be communicated through art, literature, and science, is not the expression of the unfolding development of the senses but perhaps something akin to the tuning of an instrument that has been overplayed; tuning which is intended to produce more harmonious and melodic sounds. It should be noted, of course, that tuning an instrument does not alter the instrument’s structure nor introduce a foreign appendage that might produce another sound altogether. So it is with the senses.

If anything, conscious self-awareness, as stated elsewhere, moves in its totality from and between man and non-man, non-man whom the ages have in every case christened “gods”. If history can be said to be “anything” it is this: the material and immaterial effects that are expressed within the field of cognitive dimensionality as conscious self-awareness moves in its glacier-like pace upon that continuity that links man to gods and then back again, and then forward again, and then back, again and again in a never-ending, completely meaningless and anti-teleological vacillation.

God, as in “the God revealed in scripture, the God of Israel, and Jesus Christ the King of all” who emptied Himself of His divinity and of His omniscient knowledge so as to clothe Himself in human flesh with the intent to redeem flesh which, among its innumerable implications, redeems man (and also the gods, not all, of course, but those whom the Father foreknew) as well as the entirety of “what-is” and also “what-is not” by and through His resurrection; resurrection from the worthless, aimlessness, nihilistic vacillation of self-aware consciousness by removing “His own” from the fruitless cycle of which every so-called religion of man in every case attempts but utterly fails; such removal which thereby places man – jointly and individually – on a firm teleological trajectory which has a definitive beginning, middle, end and thus a purpose, never mind if such a purpose is so often kept from the individual and individuals He has so graciously chosen.

For if we have been redeemed with Christ we take on also His mind which, though in its essence the mind of God, is fashioned in and with the limited omniscience of Christ in His humanity who is our exemplar and standard. Among His many impenetrable motivations for this emptying was that He, as our exemplar, chose to develop and cultivate an actual, real, present, and dependent relationship with God the Father who is Himself, the kind of relationship He had always had as the second figure of the Godhead as He and that which operated in the field of space and time throughout history and, now with Spirit indwelling the heart and mouth of those whom He has chosen, seeks to replicate in “His own”.

For the Spirit within me provokes me to say that relationship is what He continually seeks and will eternally ensure, one that rightly imitates the relationship He has with Himself and has always had and always will, that which is unattainable to man in and by his flesh but is made possible by and in Spirit and Truth.