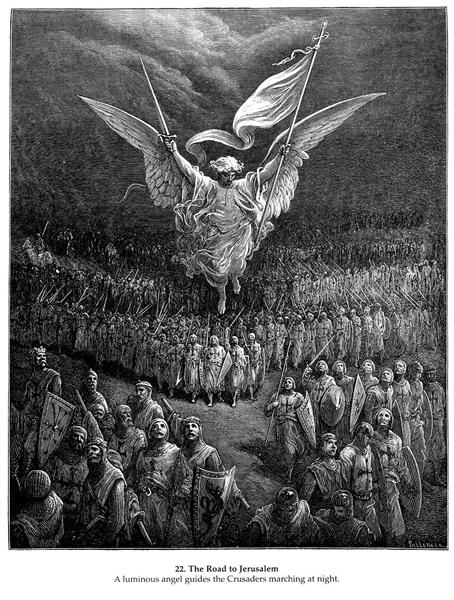 The Road to Jerusalem, Gustave Dore

There are two types of philosophers: logisticians and rhetoricians, the former who zealously uphold the notion that there truly does exist some sort of objective world that the Reason of man can apprehend and make useful sense out of, a belief which, once arrived at, they use to blind themselves to any whisper to the contrary. Rhetoricians, however, hold no such notions but believe that, in the domain of Reason, there can only be subjectivity and aesthetic values that man creates but cannot enduringly perpetuate, the greatest aestheticians who create through their art the so-believed “objectivity” that the logisticians – as well as virtually every other living soul – believe to be unerring and unchangingly endurable “objective truth”.

There is, of course, a certain degree of tension and in-fighting among these two philosophical types over the “soul” of philosophy because their fundamental values are so opposite and opposed; logisticians who, more than anything, relish psychological puzzles, geometric riddles, mathematical problems and even – be any single logistician so bold – certain ethical quandaries (for instance, you only have time to save either your mother from the burning building or a room full of children, which is the “right” choice?); quandaries by which they are willing to spill all manner of blood to “prove” and defend.

As a rhetorician, one who not merely “relishes” but endeavors to continually produce various narratives by which my aesthetic predilections incline me (for, math is to the logistician what a narrative is to the rhetorician), I cannot keep myself from loathing and even outright despising the incessant quibbling of the logisticians over what I deem the most trivial matters, those not of taste, of course, but the obstinate adherence to “rules” and “protocols” that such ones erroneously believe exist in a realm which their collective Reason by and large also rejects “in principle”.

If there are no so-called “absolute Truths” by which all men at all times and in all places can reasonably attest and affirm at least to some degree, Values that transcend individual time, taste, preference, and the conditions in which one finds himself, then, of course, the whims of certain overpowering personalities will always decide the values of whatever sphere they believe they occupy and also the people who pay them homage, whether that be one’s household, community, realm, dominion, social sphere of influence, or even – if such a one is indeed powerful enough – the entirety of one’s culture and civilization and, if possible, the whole of mankind.

If Reason was not beset by a comparable opposition whose “right to exist” held equal validity as its own and indeed pressed those rights in and upon man – who is the intersection of the two domains – then I have no doubt that Reason and the whole of “what is” would by now – having long been brutalized by the “values of the strongest” – have already abolished, destroyed, and sacrificed itself because of its failure to sufficiently overcome nihilism with mere power, with “the will to power” which, more than anything, can be reduced to a sensual, or perhaps intellectual, feeling of superiority and nobility “over and above”.

That Reason has not yet consumed itself in the pyre of its own meaningless proves – to my thinking, anyway – that such a “comparable opposition” (seen here as the domain of Faith) is still exercising its rights against Reason in the intersection of the two which, as stated, is man. Indeed, because Reason still, in fact, “exists”, it seems to me that the absolute, universal Values of Faith must also “still” be maintaining their position and role in the eternal struggle between Faith and Reason which in every way enables the conditions of life to perpetuate.

The values of the realm of Faith can only be apprehended – not in their totality, but only in the vestige of their hinds parts as they disconcertingly stroll by – when the body and Reason of man are suspended in either shock, disbelief, or incredulity — in other words, when one is “without words” and the dialectical machinations that typify thoughtful life, when the perceptive power of one’s senses is only barely hanging on by the slimmest of epistemological threads. Such a suspended state is typically induced when one suddenly confronts a material shock in the external world or an immaterial epiphany in the internal world.

One most certainly must be “out of one’s mind” and “beside oneself” if the Truth of Faith is to make any sort of meaningful impression upon his soul – the problem here being that such an irrational state will always be mistrusted, called into question, and later outright doubted and disbelieved in and by the pristine clarity of one’s reasoning faculties with the result that Reason, working hand and hand with Time, will incessantly seek to cover over, disguise, exhaust, and obfuscate whatever Truth a man might believe he attained when he was “out of his mind” so as to maintain it superficial sense advantage by which it cannot perpetuate without.

An ascending culture and people will in every case be blind to their ascendency because such a vantage can only be recognized by those particular cultures and peoples who are no longer moving up the rank of nations but have indeed plateaued and otherwise reached the peak that the momentum of their youthful vigor initially propelled them; that plateau which can always be recognized not only in the cultural and moral decadence that unavoidably attends middle age but also in the said culture’s eagerness to throw the best of their sons (and now even daughters) at any enemy who may seek to jeopardize the maintenance of the conditions that uphold and allow the decadence.

Indeed, when a people collectively awake to the reality of their ascent, such an ascent has indubitably exhausted itself. This realization is the unmistakable sign that a person or people are now in the uninteresting and treacherous middle years of their irreversible decline.

After cultural ascent comes “war”, which in our day is simply another method of managing cultural decline (and a disastrous one at that, for war literally kills the young men who alone can continue ascending their culture upon a path of youthful exuberance and ignorance).

War — always war between the decadent old power who perceives the threat to their continued expression of decadence in the new power who eagerly yearns for that decadence.

Who now will arise to challenge the Americans?

Indeed, ours is a time rarely witnessed in the history of man, for I – from my lofty view as a decadent American – can see no clear culture whose youthful vigor is propelling them upon a path of cultural or economic ascendency, at least not the kind that would jeopardize America’s superior position in the world. One could perhaps say “Islamic fundamentalism”, or perhaps “Communist China”, but China is hardly youthful, childless and entrenched as they are in a dying, ineffectual ideology with its dying, ineffectual method of cultural discourse based largely on an artificially created mid-19th century worldview with its mid-19th century conditions, however “reformed” the early 20th century Marxists (or Maoists) thought they updated and revivified the ideology to meet contemporary social conditions; and certainly not “backward-looking” and “close-minded” Islam whose moral “backbone of the faith” have willfully shut their discourse off from certain beliefs and contemporary possibilities that might make their ascendency lasting and world-encompassing.

China is indeed no youthful threat – gigantic, old, aging, bloated, and delusional as their population and backward as their political ideology undoubtedly are, theirs which is also an outgrowth of those aforementioned mid-19th century economic conditions superimposed upon a hitherto impoverished population, now foisted into the meatgrinder of ideologically unstable and nihilistic hyper-modernity, the Chinese who skipped certain necessary steps on their way toward capitalistic totalitarianism. And it certainly won’t be a reborn Russia that will challenge aging America. For they, too, are old, cold, and generally faithless and thus valueless as the rest of the decadent West, Russia who is conspicuously lacking the entrepreneurial ingenuity, moral conviction, and largeness of mind of the West which typically makes ascendency possible, never mind that Russia is in possession of a very large arsenal, advanced weaponry, and immense reserves of petroleum and wheat.

The world is old. Man is dying. And with no young cohort on the horizon to infuse humanity with the fecundity needed to perpetuate the species and virility of life, one can only look toward the Holy City to perhaps glimpse “what rough beast, its hour come round at last, slouches towards Bethlehem to be born”. But so must have been the thoughts of the average Roman citizen near the close of the 4th century.