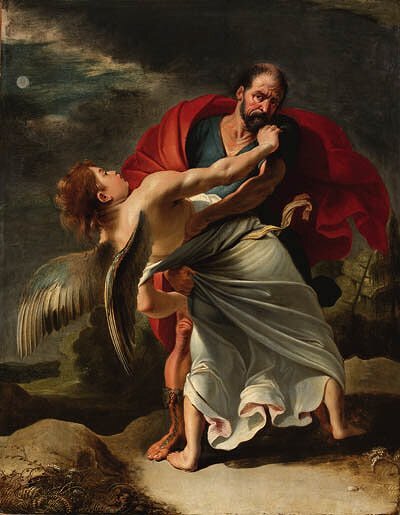 265. That we in an age of technological science should believe in the veracity of the incredulous story of Noah requires a comparable level of faith to that of that shipbuilder who, despite all the compelling evidence to his and our contrary, nevertheless trusted God and was obedient for 120 years of painstaking labor and silence on behalf of God as he struggled to complete it.

266. If he had received help from angels, it would have been mentioned.

267. If he had received help from the reprobate world condemned to die it would have been mentioned.

268. If God had spoken to him and encouraged him at any time or in any form it would have been mentioned. For such is the nature and character of the Holy Writ in that it is an honest account, which is why we can trust it.

269. The Bible seems to me to be humanity’s first work of realism. Literary realism, perhaps, but “realism” nonetheless, as in, “the quality or fact of representing a person, thing, or situation accurately or in a way that is true to life.” For, each one of its characters, except its chief protagonist who is the Christ and Son of God, are, to a man, highly flawed, weak, and also “broken” in a moral sense (meaning they are not at all perfect and without sin). The Bible frankly and in unequivocal terms portrays these characters as they, in fact, are, in the fullness of their impaired humanity. No other ancient text, to my knowledge, even pretenses to portray its heroes as anything but spotless, blameless, above reproach, and thus above ridicule, doubt, questioning, or derision. The Bible actually welcomes derision and doubt and, given that the battle over its veracity is the Lord’s and not man’s and thus cannot be holistically defended by any lone individual, this makes the Bible and the God whose Spirit wrote it “easy” jest for scoffers and mockers whose mockery is rarely, if ever, recompensed in this life.

270. Because of its “true to life” depictions of its heroes, man is better able to relate and empathize with their failures, fears, and inadequacies; their failures which are ours, their redemptions which give us hope that the God who worked in and through them might work likewise in and through us. It also enables man to witness the unsynthesizable chasm between the Bible’s chief protagonist and us: Christ who stands as a stark contrast to the innumerable heroes who compose its ranks. Indeed, so impossible is it for man to live up to Christ’s standards and His commands when one’s is living in his own flesh, that we – just as its heroes – have no other option to but throw ourselves upon His mercies so that we too might be saved.

271. For Christ’s standard of sinless excellence is indeed even more impossible for man to fulfill in one’s own flesh than was the written law of God which He Himself fulfilled and transcended.

272. The Sermon on the Mount is impossible to fulfill apart from the Holy Spirit. Bereft of Him, the sermon is not even wisdom nor good ethical teaching but folly and stupidity, and it’s utterly unreasonable to think that man in the deadness of his flesh could ever carry out a single one of Christ’s admonishments.

275. By the power of the Spirit does man alone find salvation and know life out of death.

276. A writer and so-called “thinker” such as myself who takes the literary and poetic license that I do and yet holds fast, to the degree that his strength will allow, onto faith in God must hold fast to the conviction that he had no part whatsoever in the initiation or maintenance of his faith and that it is God’s sovereign will which alone does this. For if it were up to “me”, which is to say, “the deadness of my flesh and the rebelliousness of my carnality”, I would have never chosen God nor would I, having willfully chosen Him, managed to continue therein through all those many years in the spiritual wilderness.

277. For I indeed entertained many a diverse and perverted heresy and toyed with the untold lies and clever fabrications of men, and not merely toyed but, in and of my own will, actually “embraced” some of them too (insofar as the Spirit who never left me could enduringly allow me to embrace such blasphemies in the first place); my salvation which was always His salvation which said, “If I can doubt the goodness, plans, will, and revelations of God, I (as in, my flesh) can – and will – doubt everything.”

278. As such, I was able to take “relativism” and so-called “perspectivalism” (my word) perhaps as far as anyone could take it, for such relentless drive is one of the few intellectual endowments gifted to me from the heavens. The distance that I, or any man for that matter, insofar as one has two imaginative eyes to see and a certain selective vision that need not come to an intellectual end before one can assume the remainder of the vista, is, in truth, not all that “far” as some reckon “farness”.

279. For relativism – the kind that doubts even doubt itself – can only terminate in nihilism. Indeed the more rapidly one realizes the irrefutable truth – “that in the domain of Reason, specifically, Reason alienated from the reality of Faith, there can be no unerring standard, nay, nothing universal, absolute, no truth, no transcendence, only what through the quivering consensus of men that such a consensus has deemed ‘true’, which is to say, ‘right’, ‘good”, ‘just’, ‘prudent’, ‘wise’, and so on”; that consensus which, though it may be based upon the collective experience of scores of men from diverse conditions and far-flung epochs is yet born in the effervescent domain of shifting Reason and not in the unchanging treacherous ocean of Faith, that realm which is “wholly other” than that which is experienced in the usual life of human individuals.

280. Perhaps paradoxically, it was through my own ineradicable Doubt that I was led into the wilderness in the first place; Doubt which also kept me from finding a permanent, satisfactory home in said wilderness. This, I am convinced by the Spirit within me, was a manifestation of His grace at a time when I would have otherwise scorned the idea of grace or anything “good” coming from “Him”.

281. This Doubt which, holy as it is, when He finally called me, irresistibly, back home, dispelled in me any notion that it might have been me doing this calling or that I could make the trek across the desert by my own strength alone.

282. In light of this, and also the struggle of the past decade of my life, can I – still having this Doubt that I can neither extricate from my thinking nor exercise from the infrastructure of my personality – confidently say that “it is God who alone chooses and not man, Him.” And also, “He is faithful to finish the good work He started and will.” {Phil 1:6} Yes, even when mired in many doubts, all of this provides no clearer truth that such an utterance, of which I now make daily, can only come from the mouth of the Spirit living and breathing in and through me.

283. For I am still “me”, and still doubt, and internally struggle with the goodness of God and perhaps always will. That I can speak any good of Him or utter anything truthful at all makes it clear to me that it is not “me” who utters such but the Spirit of life and truth who speaks such things. Of this, I have “no doubt”.

284. Neither can I extricate Doubt from my thinking and indeed the very fabric of my soul nor, in hindsight, would I actually want to. For anything that comes to me I doubt and distrust, and thus, if anything remains standing or whole in its original form after the unrelenting scrutiny of my mind and the treachery of my carnal heart must indeed be the truth of God, and by it the power of God who wills and works through the unique personalities of men to speak His Word to them in a way that they can embrace without delusion or hypocrisy.