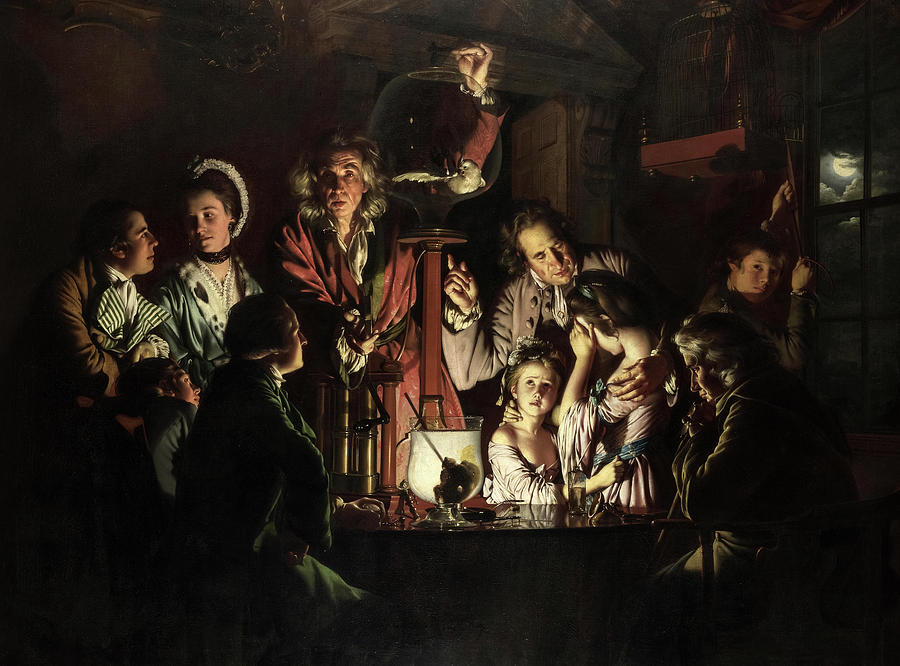 An Experiment on a Bird in the Air Pump, Joseph Wright

285. Reflecting upon my work, how can I sufficiently synthesize those two primordial subjects that have overshadowed my entire life of thought without obliterating the possibilities of what I have written unto now: “subjectivity and objectivity”, and by them, “Reason and Faith”?

286. Notwithstanding anything to the contrary, Subjectivity and Objectivity are two paradigmatic domains of thought, modes of being, and fields of possibility, two separate “receptacles” or “vehicles” which contain the various movements, striving, and becoming (or not) of Reason and Faith. (Not that Faith “becomes”, which is to say, changes to any degree or even can, but that its Truths are nevertheless impressed upon the shifting heart, temporal mind, and restless spirit of man who is, in spite of himself, nevertheless charged with ordering his world and making sense of his environment.)

287. In short, objectivity and subjectivity can be equated to the “place” and “state” in which Faith and Reason “do” (or don’t), act, and unfold; Faith which reveals to man in an ever-increasing manner the eternal and immovable Truths that have always been there since the beginning; Reason which is the lived finitude of those Truths, usually in error.

288. Nothing good dwells in my flesh. No, not a single thing.

289. Faith and science have no commonality whatsoever besides the fact they are opposites and opposed; science which is simply the most “effective” and “proven” empirical methodology that man has thus far conceived to “successfully” navigate the phenomenological world of “things” that “are” as they apparently “are”.

290. For Faith is “the substance of things hoped for, the evidence of things not seen.” {Heb 11:1} If such hoped for things were seen or could in any way be comprehended by the senses of man, Faith and all its salvific, sanctifying power would be neutralized and brought to nothing.

291. Science, as stated, is predicated upon the actualizing power of the senses and their ability to comprehend the phenomenological world so as to make that world comprehensible to man’s reasonable, rational facilities. Though one might have “faith” that a chair will hold his weight, this is, of course, not a saving faith, the kind that can only come from God who alone has the power to conceptually and spiritually raise us from the dead, among much else.

292. In truth, just as a rational man has the faith that a sound and sturdy chair will be able to hold his weight, the corroboration of which need not be deliberated long before one chooses to sit upon it, so too do all men instinctually – though not consciously nor conscientiously – put their unconscious faith in some nebulous “power of life” to sustain their breath, the beating of their hearts, and the movement of their limbs from danger towards sustenance and protection; this “power of life” which, if not upheld by the word of a God – even the God – when viewed at a cool and unsuspicious distance, is indeed an impossible marvel and no less “a miracle” to the thinking mind: that the light and heat from the sun gives life to plants which are eaten by both man and beast, while those same beasts are eaten also by man and other beasts, and that water flows around it all in a kind of self-contained vehicle, so too the air which supplies the lungs of everything their sustenance, all of which and more unfolds and keeps on unfolding in a continuous and ever-regenerative cycle without an apparent power source save the invisible will and grace of God and His Christ who is the source of all power and sustenance for the entirety of the cosmos (but that only by revelation that also comes from Him).

“Glory be to God who gives life and breath to both the godly and ungodly and upholds the world and all that is in it by the Word of His power.” {Heb 1:3}

293. The moment that “thinkers of the faith”, the so-called “doctors of the church”, attempted to synthesize faith with science, particularly through Aquinas who, as a kind of spokesman for both, ceded this essential victory to science as the ultimate arbiter of everything that “is”, to include the possibilities of Faith, set into motion the rule that henceforth all things must appeal to the senses and reason, and be judged not according to the unspeakable verities communicated by faith, but by the so-called “laws” of science for them to be “true”, or “to be” at all.

294. For while those things which science proves are “true”, they are not articles of Truth, the latter which can only come by way of revelation from the Holy Spirit of God who, though incomprehensible to man, speaks of and about Himself to Himself.

Now, whether man can appraise such a self-contained conversation and make any sense out of it, such a revelation must be given to him from above by the power and will of that Spirit who is the totality of the realm of Faith and all that is in it, whether those things be knowable to man