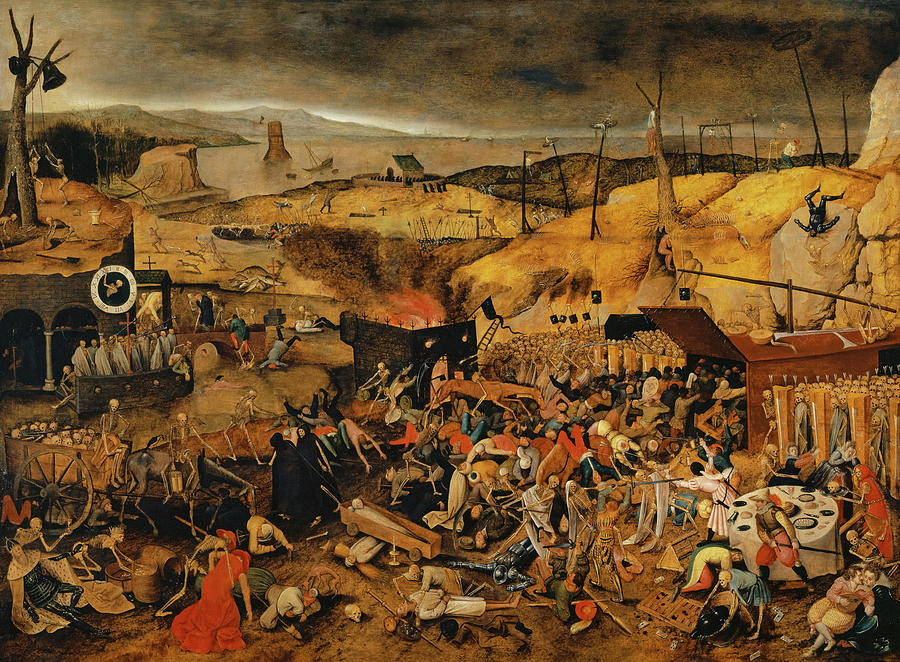 The Triumph of Death, Pieter Brueghel the Younger

Something might appear ordered, but not be teleological. Take, for instance, nature which, in many respects, appears to man’s reasonable facilities to be teleologically ordered according to the internal logic of its own economy which prioritizes, according to the theory of evolution, survival and reproduction above all else. Yet, this prioritization – mute, dumb, and emotionless as it is – cannot imply or communicate any goal that might transcend itself or the apparent ends of its own closed economy. Far from it. For, all this “surviving and reproducing” that man witnesses in nature grounds it irredeemably in the materiality of mere organic life which can do no more than ground in finitude and death.

Speaking metaphorically, eyes endeavor to see. The same could be said of all the senses and their respective functions that man has inherited from the accumulated history of his body. When man emerged from the unconscious oblivion his eyes “saw” and would develop no more, nor would any of his other senses in any meaningful way continue to develop beyond their original purpose and apparent function, lest they overdevelop and begin to perceive that which is beyond their potentiality and thereby expand or even alter the horizon of possibility which was enabled in and with the initial genesis of the senses. Such overdevelopment would have, of course, enlarged reality itself and most likely sent it on another course than what has been hitherto known, felt, and understood.

I suppose there arose in the history of man since his subjective awakening an opportunity for the individual regression of the potentiality of the senses, regression which might have been passed generationally — only to be regained in and by subsequent generations. But this regeneration back to the old, pristine, original form of the senses is in no sense a progression, merely a reclamation of what had previously been achieved.

Therefore, insofar as the senses supply Reason and all that is “real” their horizon of possibility, and because it might be generally said that the senses have not in any meaningful way changed, the horizon of possibility – also known as “reality” – has also not changed since man’s subjective awakening. Only his opinions about that reality have changed as well as his bias, his interpretations, and his so-called “understanding” of reality.

Behold how powerful are man’s opinions and bias! – that such unstable things provide the conceptual grounds by which civilization has evolved, changed, and, from a certain perspective, “progressed” through the ages unto now.

The inborn, ancient, and inescapable need to atone and propitiate for the crimes that conscious life perpetuated against the unconscious connectivity that was our former socio-mental predomination.

The incessant longing for and often preclusion from the experience of catharsis is, in my humble opinion, the root of all human angst, spiritual consternation, psychological malady, and pathology.

The need for catharsis is indeed the most primordial need of man and is the primary motivation behind all his wants, his desires, his pathologies, hang-ups, failures, and triumphs, his turn-ons, and turn-offs, his need to prove himself and be approved by others and so on. Forever will he seek to assuage and atone for a sin he knows not the reason, nor the source, nor the offended party, nor the consequences of the offense, and forever will he be kept from assuaging them if such atonement is attempted by and through his own deed and merit.

For the “original sin” by which all others stem and by which the whole of the cosmos has been “subject to futility” was first perpetrated when conscious life itself was birthed and man became and remained conscious, which is to say, “forever severed and separated from the unconscious collectivity that linked man to man and man to God”. In God’s happy embrace was man’s meaning continually “supplied”, even though he had no awareness of such a need in the first place. Before man became conscious, he did not perceive individual and separate “things” that would, in order for them to have any meaning at all, require a certain transcendent telos be imbued into them. Unconscious man had not this power because he could not self-narrate (such narrativization would require first an awareness of the body and the erection of his nominative “I”).