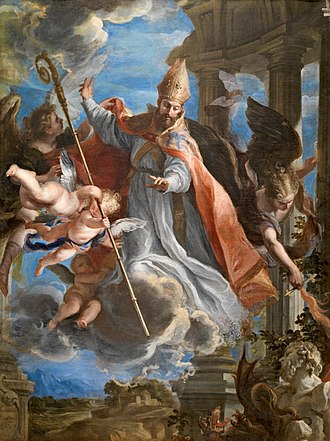 310. The Word of God, which is to say, His Christ, was, is, and always will be the same from age to age and people to people, irrespective of the limitations of time and space. Christ, in fact, must be unchanging if the cosmic and moral order is to remain fixed and set upon the path that He ordained before the foundations were raised and the infrastructure set.

311. Truly, though “Christ who, being in very nature God, did not consider equality with God something to be used to his own advantage; but made himself nothing by taking the very nature of a servant, being made in human likeness; and being found in appearance as a man, humbled himself by becoming obedient to death – even death on a cross!” {Phil 2:7-10} — even this Christ did not submit to the order He created and eternally sustains in a permanent way, but being made by God “for a little while lower than the angels” so that He might “put everything in subjection under His feet.” {Heb 2: 6-9, emphasis mine}

312. “Now, in putting everything in subjection to Him, He (i. e. God) left nothing outside His control,” even though we might not, at present “see everything in subjection to Him.” {Heb 2:8} Yes, this Jesus, “was made a little lower so that by the grace of God He might taste death for everyone” {Heb 2:9} and by so doing, “bring many sons to glory” as “the founder of salvation” who is, just as we, “made perfect through suffering.” {Heb 2:10}

313. But though this God, this Christ, this Anointed One, as God and thus not subject to that which epitomizes the essence of life, namely, that it will come to an end through death, though He might have “tasted” death, He, alas, as God, cannot fully die, nor can He be permanently subjugated to His own creation but only insofar as to fulfill the eternal role of suffering Servant by which we, as His chosen, must also suffering and through those sufferings be made perfect like Him. {Heb 1:10}

“Praise be to God who suffers and has chosen to suffer on our behalf so that we would be made perfect like Him (insofar as we also have undergone various trials).” {1 Peter 4:13}

“What kind of God is this who has willed this will from the start? Not any God that the craftiness of man could devise; man who would everywhere look to the “over-man” or other such glorious depiction of a deified humanity, not to a suffering servant, a Jewish carpenters’ son born to an unmarried Jewish girl and reared in utter obscurity, one that was tortured and died in relative obscurity too.”

“I say again, what kind of God does His flock worship?”

314. Often when I sit down to edit my so-called philosophical treatises, I find myself so utterly perplexed not only by the intent of many a disparate scribble but can little make heads or tails of the words I used and the syntactical style I employed to communicate such; befuddlement which leads me to question the veracity of the spirit that possessed me to write them in the first place.

“And if I am lost, God help the poor reader who, for reasons inexplicable, chooses to entertain this dribble unto the end.”

“I can only imagine what the vast bulk of my not-yet-realized readers might think when wading through my nonsense, but it would probably sound like, ‘will you just get on with it and get to the point’ and finally, ‘rubbish this nonsense, I can no longer stomach it’.”

315. To be included in the ultimate will and purpose of God, that which appears to be the raising from the dead of a people to be made into the image of Christ who will be Christ’s everlasting and spotless bride, is an honor and a privilege so unspeakably wondrous and downright incomprehensible that it utterly disorients the mind and makes weak the knees of the man who has been entrusted with even its partial understanding.

“That He should include lowly and despicable me in this tale is, for all intents and purposes, downright offensive to those who know me and must endure me. Only God can choose a man like me – a hopeless reprobate – for His purposes and plans.”

“Glory be to God whose ways are far above our ways and whose mind is far too incomprehensible for our minds.”

316. Revolutionaries always become such by way of impatience. Impatience that the prophetic promises of some earthly messiah who, having had their hearts filled with resentment for the established order under which they came into the world by this messiah, are too slow in coming to pass. The impatient revolutionary, taking upon himself the fulfillment of the prophetic vision into his own hands, attempts to force its fulfillment by violence, violence in the fist or in the pen, and the wanton flame of his mind.

318. Indeed, the most powerful men in our societies have been and will continue to be those that promise a certain clear and near-undeniable future and even claim to can guarantee it.