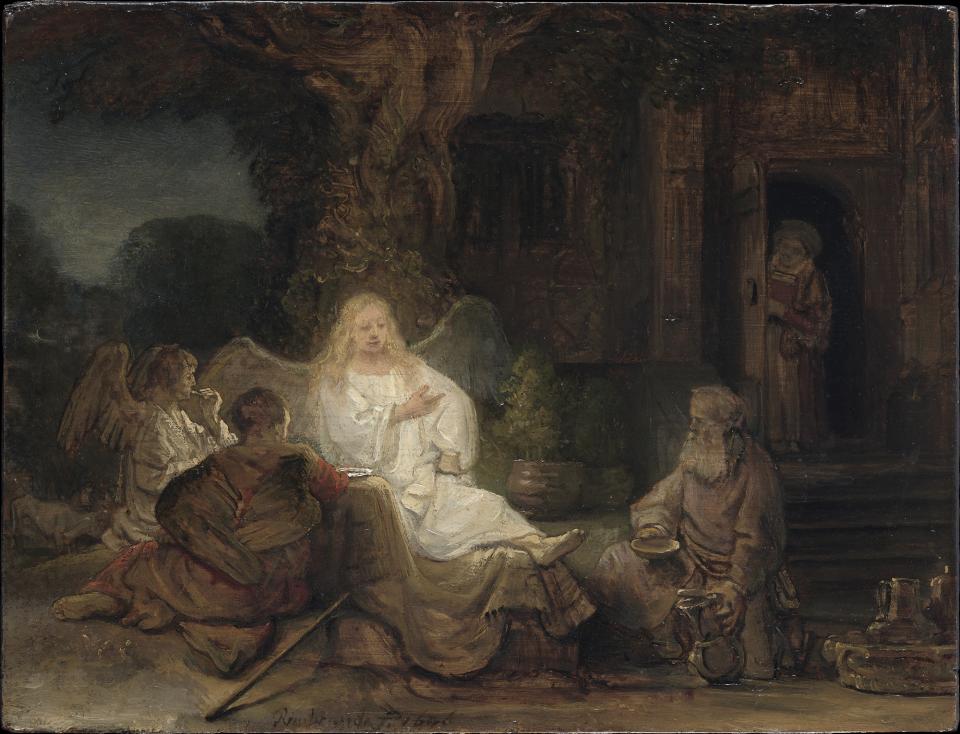 Abraham and the Angels, Rembrandt

75. Before Abraham, God’s domain of Faith and all the power and Truth it contained, were, to man, only a potentiality. After him, it became an actuality.

76. No, that isn’t correct, not according to the tenth chapter of Hebrews anyway, and not in the absolutist, immutable, and very real sense that I have been hitherto describing. Herein being corrected by the Word of God does my tongue stand still and my pen run dry on all future divine assumptions.

77. That Abraham is considered “the father of Faith”, however, is based upon the immutable promise of God to “multiply his offspring” in the face of God’s subsequent demand that he also sacrifice Isaac which, once God averted the physical consummation of the act, declared that “through your offspring, all the nations of the earth will be blessed because you have obeyed My voice.” {Gen 22:18} Such a promise was not given to Abel, nor Enoch, nor even Noah who was saved when the whole world was baptized in water. To Noah, He simply said “be fruitful and multiply” {Gen 9:1,7} and further, “never again will all life be cut off by the waters of a flood; never again will there be a flood to destroy the earth.” {Gen 9: 11, 15} But, though such a promise God made to mankind and all the animals who came out of the ark through Noah in a general sense, it was not made to every nation that would come out of the faith of Noah in a specific sense. And so it is from Abraham’s promise – perhaps because of the intensely personal and intimate nature of his sacrifice – that the specific promise came. In this light, Noah’s faith corresponds to a different kind (or domain) of faith altogether than that of Abraham’s. Abraham’s faith which was not faith in a general sense by which all subjective men of Reason would henceforth be bound, but Faith in a personal, intimate, very specific, and very real and actual sense; the kind of Faith in which God is most likely to dwell, being as it is the very nature of the person and personality of Christ who is Lord of the one true domain of Faith.

78. That there might be different domains of faith should not overly strain the understanding of reason, for Christ, perhaps anticipating later objections to His claims to exclusivity said, “no one comes to the Father but by me,” {John 14:6} implying that humanity would attempt to seek the Father by some other means, some “other faith” as it were, even if those means had yet to be established or were tainted with the disease and death of “good works” from the start.

79. So, different doors, then different domains of “faith”; general “faith” (which does not save) as God made possible through His covenant with Noah that applied to all mankind and even beasts and birds, and, later, specific Faith which He made possible (teleologically-speaking) through Abraham; one broad door and a narrow one. {Matt 7:13}

80. Christ was not given by the Father as a reaction to the fall of man, nor were any of the works He might or might not have done from the beginning until now a response to the spontaneous free will activity of the Creation, as if God could be taken by surprise by anything that might be perpetrated by said creation. Without such foreknowledge of all that man would do or fail to do, He would not be God.

81. God’s plan, of which He hid from even the angels {Col 1:26}, was and had always been the cross and the Suffering Servant who would be crucified thereupon.

82. Christ is not a contingency.