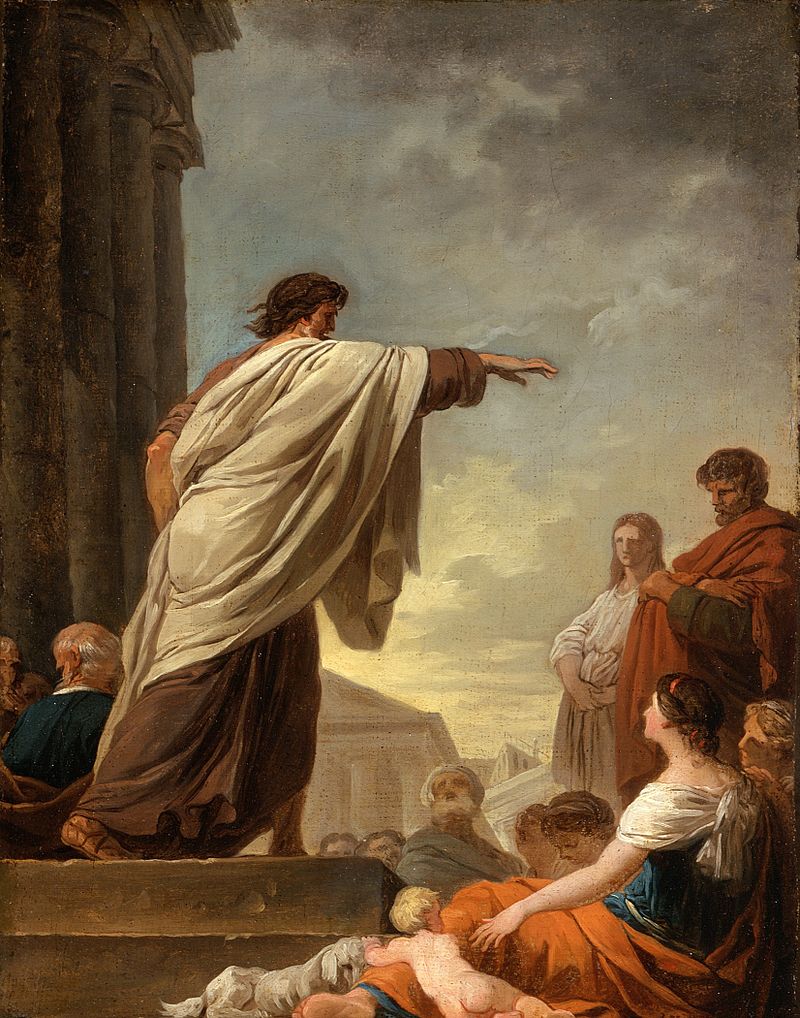 83. Did God create evil? Or did He create the conditions that might allow for the emergence and future perpetuation of evil (which is more or less the same thing)?

84. That God uses evil for His own holy and sovereign purposes, and thus reigns over sin, death, and also righteousness is undeniable (“reigning over” here meaning “in complete control of”). “Therefore, He has mercy on whom He wills, and whom He wills He hardens.” {Romans 9:18} And also, “for Scripture says to Pharaoh: ‘I raised you up for this very purpose, that I might display my power in you and that my name might be proclaimed in all the earth.'” {Rom 9:17}

85. To say that God, in the eyes of both the reprobate and redeemed, is the ultimate arbiter of justice is likewise undeniable. If the justice, therefore, that might be meted out by a holy and sovereign God does not conform to man’s enfeebled and myopic sense of justice – which is not teleologically or epistemologically primary – such is not the fault of God but the shortcomings of man.

86. Trusting not in the wisdom of man – even if such wisdom has passed little unchanged from time immemorial to the present as virtuous and universally affirmed as “right” and “correct” – is the first critical step toward the right view of God, however unpleasant and offensive such a view might seem to our “better natures”.

87. For God is in no way arbitrary but is indeed the telos of all things and in Him do all things find their purpose and reason for being, never mind if such a purpose might be kept from us who are alas, so impossibly finite, impotent, and perishing.

88. Man has long allowed his heart to be tormented over such crucial questions as: (1) did God create evil? (2) Does God harden the hearts of some men arbitrarily and destine such ones to hell, simply for His own “good pleasure? Contrarily, (3) does God arbitrarily find favor and therefore save those whom He will, and, if so, why? And (4) what about all those untold billions throughout the course of humanity who never heard the gospel, due to the remoteness of location or the lack of preachers to spread the gospel, those helpless humans who, in order to believe in the first place, must hear of the good news of Christ, as it is written: “How, then, can they call on the one they have not believed in? And how can they believe in the one whom they have not heard? And how can they hear without someone preaching to them?” {Romans 10:14} Such quandaries can only be assuaged by the revelations that might come from the Spirit of God, and even then with only enough revelation to force one to lean on God’s understanding, not on one’s own; His understanding which is ultimate, final, unbending, and unremitting.

89. For what would it “profit” anyone to worship a so-called “god” who would leave things to chance and also conditionalize his will according to the flippant whims of the “will” of “his” creation, of which – to such a “god” – would come as a happy surprise or frustrating nuisance?

90. Every so-called “god” who is not sovereign in the heart of a man is, of course, not “God” but an idol made in the limited and frivolous image of man.

92. Gaining clarity on the question of God’s sovereign will to eventually right every tormenting quandary that may beset the heart of man, either by arriving at a satisfactory answer according to the Spirit’s leading or through the surrender of “a man’s need to know” the full answer in this life and in this present body, all of which is one of the greatest gifts of the Holy Spirit of God.

93. As stated elsewhere, all wisdom and the truth of the deepest products of knowledge begin and end in the admission: “I do not need to know.”

94. While such an admission might be easy for the dull, glib simpleton who will remain on the breastmilk of the kingdom his whole lifelong, it is exceedingly difficult for the Thinker to make such a confession; the Thinker who endeavors in all things to assuage his conscience with his many pillows of certainty; the Believing-Thinker’s search for certainty which is that force which has excavated and later colonized the difficult frontiers of Faith by which the above questions might be answered – and confirmed by consensus – at all.

95. I do not need to write an apology to the world on behalf of God’s difficult-to-accept quandaries and innumerable offenses. God needs no apology, in fact. From anyone. Any attempt on behalf of a “believer” to condescend God to man’s reason distorts His image and defaces His truth. So too will any apology that might result from such a condescension also be a distortion and should not be trusted by either the world or the one who offers the apology.

96. God can stand for Himself.

97. No amount of apologizing will ever satisfy the heart of those whom God has hardened and through that hardening blocked their ears from ever hearing the Spirit of Truth. In fact, such apologies dishonor God, the apologist, and the one who receives the apology by positing, before even the apology is offered, a wrong view of God’s relationship to man. A wrong view in this will give one the wrong view of everything.