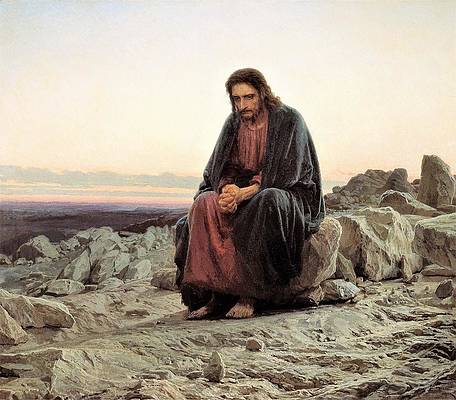 Christ In the Wilderness, Ivan Kramskoi

Beauty, dull, is He who does
despite a where, a whence, a how, or what
and yet still flings against his sky his heart
and aims thereto without a why or crystal sense
that ever claims the stone is best and end is safe
and more is good,
which though might stir the loins of beasts
fails to course our Man the least;
His highest joy the pensive feet
that trundle through the unknown street
of many threats and dangers-meet
whose only pride the knowledge that
though he flinched
did not retreat.

From the Concertina of History,
the evolving sentiments of Time will inevitably reach a hinge of perspective,
an irreconcilable middle, an imbalance,
a pivot and a turning-away from the always-looking fearful-reverent upon the golden heights of lofty past
from which we fell and keep on falling until at last
the gilded gloss is lost to silver, then to bronze, copper, iron, rust, and finally coal
that’s tossed a-flame by He who knows the peaks doth stoopeth low to kiss his toes
that haunts the fields of myth and mind and deed and song
and casts all want to strive and pray
to gleaming hope of future day
where all must fly
lest we stay the same or worse
and gaze, like Lot, behind and die.

Man is therefore either moving away from the impossible heights of some prior utopia or toward it; utopia which, unattainable and unreal as it is, assumes the same essential form and vital function from age to age no matter if viewed from the front or behind: to supply man an idealistic exemplar by which he and all he does might orient and aspire so as to know himself and his things as good, right, just, and beautiful — or not.