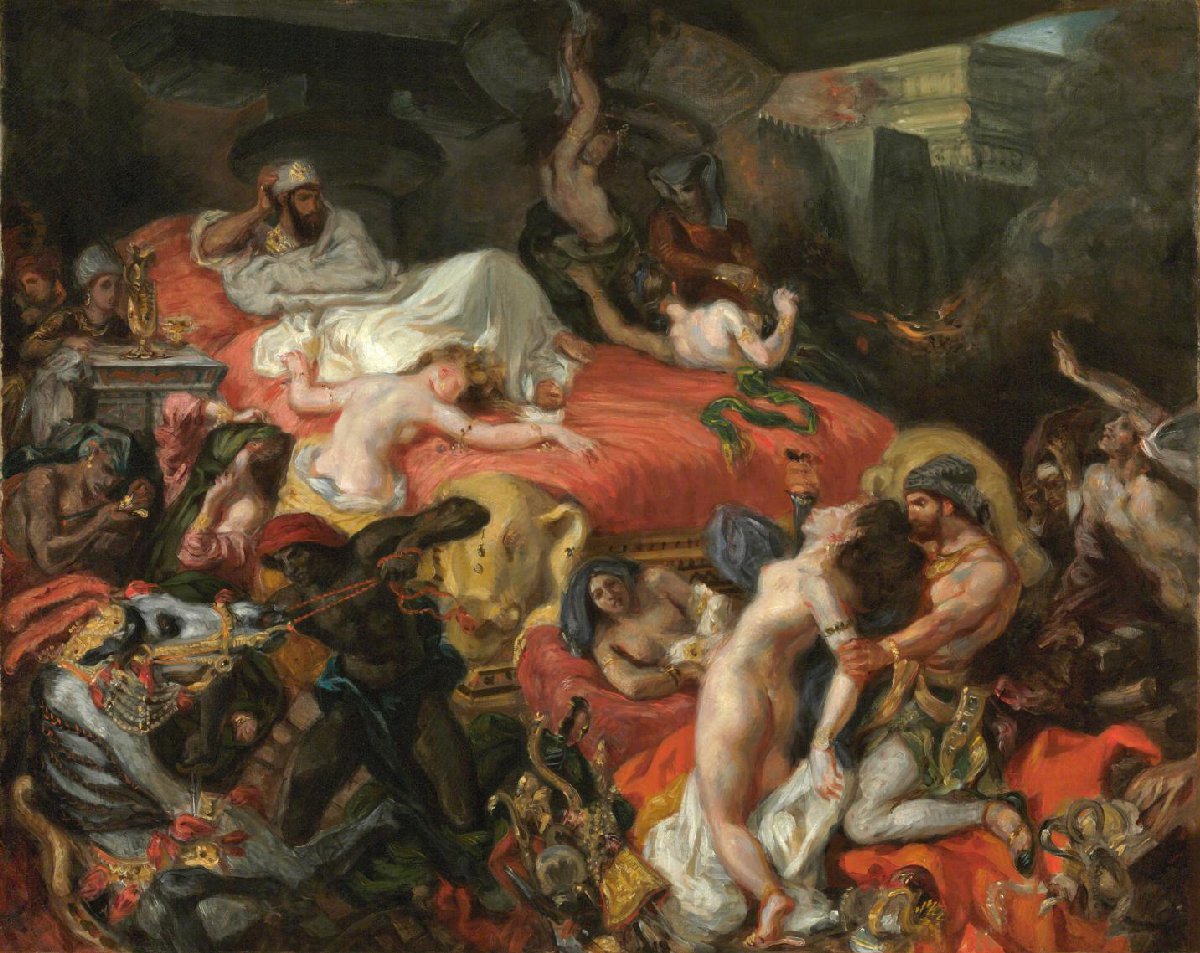 The Death of Sardanapalus, Delacroix

Why is decadence, when it has taken hold of a people, irreversible and its end the complete and total collapse of such a people who will inevitably see their innumerable achievements scattered to the wind? Because the comfort and surety of their tomorrow, which all decadent men assume both because of its current abundance and the seemingly unassailable momentum thereof, will indefinitely continue; such false security which infects them with the delusion that their day in the sun will be perpetual and somehow different than the past’s day under the same sun which, indeed, was temporary; a belief which is insulated because of the strength of their technological achievements which, paradoxically, are the primary mechanisms that have made them weak and dependent in the first place; those achievements which they erroneously believe will protect and provision them against any and all calamity.

No, in truth, decadent societies never return to the strength that had animated their rise. For a man to claim that decadence can somehow be reversed – while at the same time maintaining that lofty standard of living to which they have become accustomed – is the epitome of foolishness and indeed demonstrates that the people of which he is a member are too far gone to fight or care or to have any wisdom whatsoever.

In addition to the deleterious effects that the inverse of a God-ordained social hierarchy brings upon a society; that inversion which principally sees the social, political, economic, and sexual liberation of the female who, as she ventures away from the home into the realm of men, has no other choice but to adopt masculine characteristics which undermine her role as the primary caretaker for the family, without which no society can long persist. As women gain, men lessen, both their own masculinity and their rights and privileges in society, eventually to the point that masculinity, in such a feminine “world”, is viewed as a deterrent and a handicap to a well-functioning society; masculinity which, it must be stressed, is the sole spirit which might check the unmitigated fall into sensuality and hedonism. Excessive sensuality and bodily hedonism utterly weaken man’s resolve and indeed his purpose to do or to seek anything besides. It is precisely in this sensual intoxication, of which accosts him without end at every turn and by which he cannot long resist – no matter the internal constitution of a man – that he, when he rouses from his orgiastic hangover, will confront and be confronted by nihilism. For nihilism is patient and long-suffering and will truly wait for centuries to reveal itself to a people if it must, but when it has been revealed, cannot be sufficiently ignored in busy-bodiness nor idle distraction nor any false pretense that may try to posit some transcendent value by which a people may unanimously ascribe with the hopes that such a value will be their salvation and liberation from corrupting hedonism.

The flesh of man will get what it wants, eventually. But, as elucidated above, when it believes to have found it, will not cease from attempting and re-attempting to find it again and again, with every successive discovery failing to reproduce the sensual grandiosity it experienced in the sunrise of its decadent liberation.

Constant and continuous overindulgence in the ecstasies of the flesh neutralizes and debilitates man’s desire for anything else. And whenever time and history force him to give it up, such men lack the inner resolve, strength of back and limb, or moral character to fight to regain it, if fight for it they attempt at all. For decadence is a spiteful god and fails to gain the enduring allegiance or fealty of its worshippers, for “actual” men instinctually know that it is a false and effervescent god, a vain god, a vapor in the wind. And actual men despise it and also themselves for lusting after it to the point that they will eventually refuse to fight to maintain it. Though perhaps necessary for a people to learn for themselves the essential verities of life – that life is chiefly concerned with suffering, not pleasure – learn it they inevitably will because the forces that ally against them, chiefly, those subordinate peoples who want the decadence for themselves and will not rest until they get it will eventually overcome them. For “harder is it to maintain a thing than to achieve it.”

Hedonistic peoples are in every case nihilistic people, if not before their hedonism then most certainly after. And again, not only do men not have the physical or moral strength to fight off those who so desire hedonism, they, when pressed – aware instinctually that life is suffering, and that suffering is the elixir of life and the only means by which one might overcome mere hedonism – are actually keen to give it up to the first one who asks for it.

For how pitiful and foolish is the people who will fight to the death for their right to continue to experience the death that always ensues after drunken, orgiastic revelries? No, people will not valiantly fight for it, no matter the mythical aura they have sought to encase it in. Besides, decadent, nihilistic pleasure-consumers cannot be valiant in the first place, only ironic. In decadent societies, valiance is sacrificed at every turn for irony and mockery. No decadent people can be true or utterly sincere about anything because all know that such displays are only clever means of increasing their own capacity for more decadence, self-glory, and fame by which they might attain even more worldly pleasures.

“Oh? You want me to go to war so I can continue to intoxicate myself through drugs, drink, sex, and the rest? That’s pretty funny.”

Excessive pleasure weakens and renders one defenseless, as it should be, as it is.