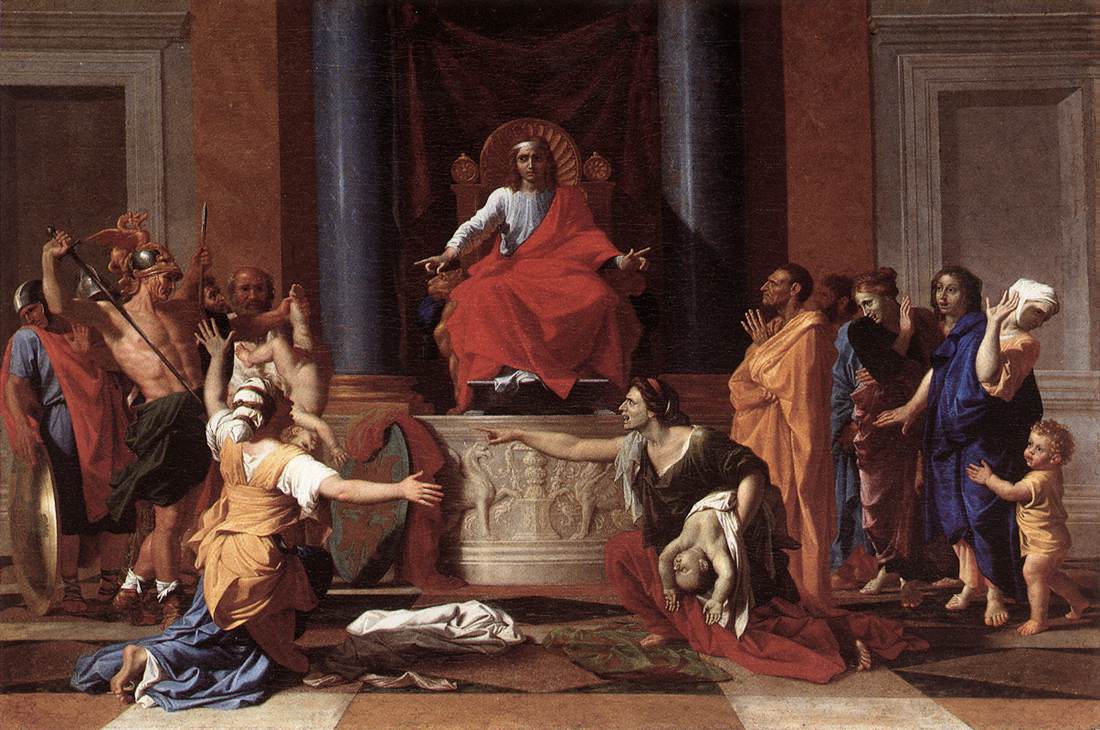 The Judgment of Solomon, Nicolas Poussin

All of which is perhaps not a satisfactory answer to our Reason, but it is indeed the sole response that might be given by a sovereign Lord to His creatures and His creation.

The “problem of sin” is only a problem to the apostolic, Augustinian faith which posits God’s sovereignty over and above everything, that problem being: how can God find fault and hold men responsible for sin which He knew beforehand they would commit and yet He sovereignly allowed them to continue therein and which, from a certain perspective, made their sin inescapable by hardening their hearts to Him and His gospel? For, the so-called Arminian or Pelagian faith – which is no faith at all but apostasy – quite readily accounts for man’s sin by first discrediting God’s total sovereignty through the profession that man – in addition to God – has ultimate freedom of will which can contradict the will of the Creator, and that man, in his freedom, uses it to sin against God and the whole, of which God was either surprised at or envisioned down the “corridors of time” a period in which such a man would somehow overcome his dead and incontinent spiritual condition by his own will to once and for all choose God who would then honor such choice by bestowing such ones eternal life. This apostasy leaves, thus, no room for the paradox of Faith and the offense of Christ which is crucial in the surrendering of one’s will to the will of the Spirit who, as God, does and moves on our behalf to do that which in our own flesh and deadness of spiritual condition is utterly impossible.

For, above all else, is Faith (i. e. the saving faith of God) known to Reason by its unsynthesizable paradox and its offense to Reason which must be embraced as such in order for the Spirit who is Will itself to “overcome” a man’s “will” to do that which man would not and could not, which is: “Believe on the name Jesus Christ so that you might be saved.” {Acts 16:31}

God is not the author of sin though He is not surprised by it – indeed, another impossible square to circle.

Only man has a soul. Animals, unfortunately, do not.

Man’s soul, as the spiritual signature of his Creator, will thus endure forever. Animals, having no soul, will not, even my beloved dachshunds. God may it not be so!

How can a man live his life under the sun and the tyranny of reason any other way but to perpetually console himself with the false notion that he is free, even ineradicably so?

Of course, he cannot. Thus will he go on living in the body believing that he has freedom of will: the sinner believing that he can choose some other course of action besides sin, the saint that the Holy Spirit does not have full sovereignty and autonomy to do and to act at all times and in all things in his life; the realization of which is, of course, for the saint’s good in that as one equipped with this knowledge, he is incapacitated from boasting.

Even equipped with the knowledge that his life is determined, even meticulously and intricately so, changes little one’s outward conduct, specifically as a man lives, thinks, and goes about his life. For if the Holy Spirit truly does move, act, and will within him, then I dare say that such a man will be prevented from being spiritually sloven and lazy, entitled and prideful as many apostates and scoffers of this truth claim. Quite the opposite, to the degree that one has fully sublimated this truth, such a one, trembling under such a costly weight of glory, will be compelled to throw himself upon the mercies of God even more than he would if he had some other notion, first out of love and desire and secondly out of inadequacy, ineptitude, lack, and fear of God whose wrath is on constant display – as it should – to the grace-saved sinner; wrath that such a one was uniquely and inexplicably saved from; wrath that awaits those who are not so inexplicably chosen.