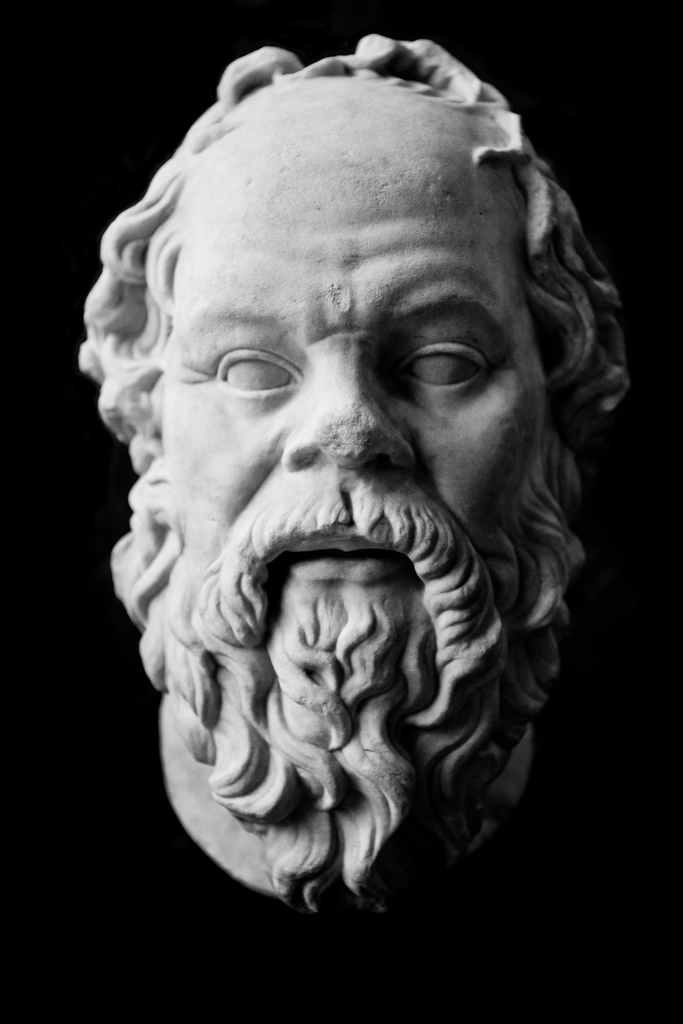 As a man grows in doubt, he grows also in wisdom.

Indeed can the measure of sagacity in a man be ascertained by the degree to which he is unsure, not necessarily concerning the claims of others, but specifically those made by himself: “Him” whom the wise man (if one desires to be reckoned as such) must be most of all ambivalent and uncertain; Doubt which in every way provides the necessary resistance by which the creative will is able to move towards its goal of Overcoming whose prize is not found in the consummated Act but in the actualizing Art that arises as a result of all pushing and movement; Doubt which, ensuring as it does the manifestation of the artist’s most desirous intent, namely, the work of art itself, is in manifold ways the thinking man’s god: a tragic god whom the thinker must continually combat with his every step closer thereto; that god whom the thinker both loathes and fears but by his insatiable need to create for himself certain self-sufficing truths by which he alone must live is nevertheless compelled to continually pursue, worship and praise, if also occasionally curse.

“Diversity” of thought and/or action is simply a byproduct of “biological vitality”, supplying as it does the aesthetic texture by which the garden of the world might remain beautiful, fecund and thus worthy of man’s exploration and copulation; Beauty which cannot arise out of consensus, cooperation or the mindless muddying of the moral, cultural and racial waters of man but through the prejudicial malevolence and warfare directed towards those streams one perceives (either rightly or wrongly) as nearest in expression his own; proximity that the cultural, spiritual and, finally, material guardians – or “epitomes” – of a given tributary seek in manifold ways to widen and cleave so as to gain, however momentarily, the upper hand over each neighboring stream so that such a one might enjoy the fleeting rights of the victor which preserves as much as it refines the cultural, spiritual and racial type from which those epitomes hail; Epitomes which, according to the degree they distinguish themselves from their neighbors, enable through the synthesis of their contrast a more subtle, artful, encompassing, penetrating, far-reaching and devastating apprehension of the universalities of Truth, should such universalities be accessible to futile man in the first place.

Struggle and conflict is the natural state of life: first seen in the individual as a war between one’s own members for biological dominance whose triumph ensures that the victor will receive the lion’s share of vital resource made available to the system as a whole, that war which soon spills outward as external conflict in and between immediate families and insular bloodlines, culminating in the strife between greater, more numerous, general and less implicit definitions of families, lines, peoples, races, nations. This omnipresent struggle for dominance – autonomous, unavoidable and, indeed, so very vital for the ongoing maintenance and evolution of life and culture – can only be eased if the individual unit is convinced that cooperation with its more powerful and primordial neighbors will ensure the continued supply of those resources that such a unit “believes” it needs to survive and reproduce; “primordiality” which is always established by conservation, severity, discipline, austerity, willfulness and the kind of demonstrative self-overcoming that signals to the world at large the presence of an individuals’ internal order, purpose and intentionality that is by nature rare and distinguishing; Primordiality that is only later maintained by the expressed codification of a certain mass morality, one which grounds, ensures and reinforces the ordered cooperation of a particular group by means of the “divine” and inaccessible suprasensuality of the powerful and purposeful; decrees that always reward consensual subservience and punish willful disobedience; morality which, embedded as it is in the deepest, most unconscious and diminishingly insignificant relationships of life, must exist so that a man and his members might “relate” to their neighbors and by so doing attain the aforementioned vitality that Belief has conditioned them all “to need” in order to endure.

Freedom of will, which is to say, “willfulness as such”, cannot exist if it is supplied with only a single option, that “option” being no option at all but the unaware compulsion one must unconsciously surrender in order to simply survive, that which a man does not think about because he cannot without an appropriate opposite to give it “life”, or in this case, “want”.

No, willfulness can only manifest in the presence of two or more possible courses of action; willfulness which does not simply prefer the “either/or” over the “both and more” but whose mere existence necessarily demands and will in every way seek to impose the reality of the either over the both; Willfulness which will, in fact, seek to slaughter the entire diversity of the propositional world in order to find the greatest possible Enemy in whose glorious light all else is mere shadow and fog; the Willful Man as he who cannot long endure the presence of the superfluous, expendable, common and easy in life which contains, to him, no life at all and is indeed antithetical to it and thus destined for the forgetful pyre of time.

For this reason will the Willful Man, who is also the Nihilistic Man, be the savior of the present age and usher of the next. Not, of course, that nihilist who can do nothing but destroy, but he who, like a woodsman who fells the majesty of a thousand year oak for the glory of the house he’ll construct from its parts, builds even when he breaks; the Nihilist who through power of foresight and vision will slay, with the clearest of all possible conscience, the never-ending plurality of the propagated present so as to eliminate all unnecessary, redundant and inauthentic expressions by which men of our age empower themselves at the expense of that One Essential Thing that alone ensures Life and sustains it, enlivens it and provokes it to grow. The Meeting of Dido and Aeneas, Nathaniel Dance-Holland

Discipline, severity, austerity, acts of strength, acts of will, of self-overcoming – these are those which make for the Apocalypse of Hierarchy: that which orients a man’s soul heavenward, whose angle of trajectory (if acute enough) will eventually draw all similarly worthy things unto itself.

Visions of the past, rendered artfully and indeterminate, always paint a clearer and more prescient picture of the future than any direct prophetic attempts to render the same based on the myopic interpretations of whatever objects currently shift before the present like so many sands of gentle shore.