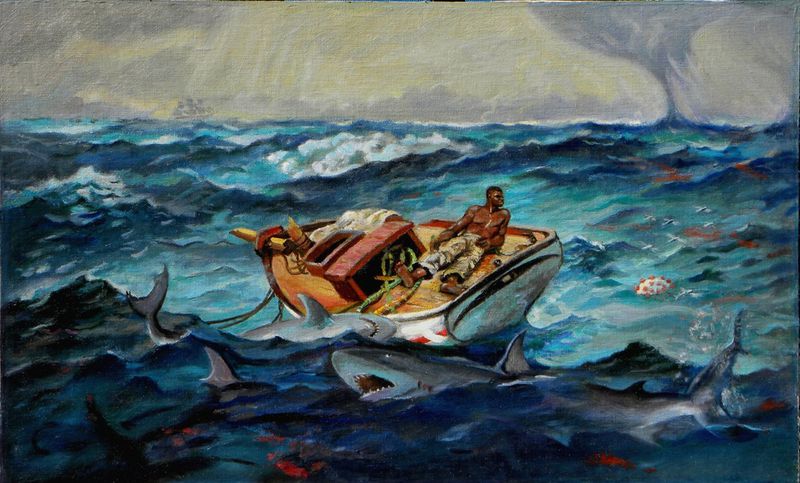 The creative instinct – fickle, moody, immature, and quick to judge as it so often is – expresses itself across time in either furious orgasms of near-limitless intensity or banal spans of drowsiness, luxuriation, and uninteresting quiet; the latter which, however difficult and disconcerting it might be for the artist to navigate – periods of quiet that torment him with the lie that his aesthetic gifts have either run dry or been stolen from him overnight – must nevertheless be endured and hurried not unduly along. For through such alchemical patience do the seeds of profundity and emotional exuberance germinate, root, and burst violently from the ground, none of which could have been accomplished if they were unnecessarily burdened with superfluous creative angst, the artist’s “uncreative dribble” which is the only suitable compost that can be heaped upon the tiny expressive seed that might attract the necessary worm and bug and germ to bring it the heat, light, and breath to develop and become.

The more ruthless, devastating, severe, unwavering, audacious, and universal the implications that may accompany a given thesis, the more distinctive, distinguishable, and undeniably-tangible will the particularity of its antithesis necessarily be; both syllogisms which, holding fast to their own unerring self-belief and the apparent incompatibility of their convictions, will resist with unflinching resolve any easy, simple, direct, and ostentatious synthesis and can thus only be handled by the careful and conscientious mental efforts of the linguistic artist of the highest, most sophisticated, nuanced, and yet self-disciplined type, one who has proven himself the best possible master of the worst proclivities in and of himself, those which always manifest in and through the natural inclination to attach a hasty moral valuation to everything his mind encounters; valuations which, necessary and intrinsically autonomic as they are to the psychological processes of man, limit the potential expression of freedom of any aesthetic endeavor and thus doom its ultimate end from ever finding a satisfying syllogistic resolution.

Only the deranged, shiftless, thriftless, impractical, good-for-nothing ne’er-do-wells of the world can even remotely conscious the indiscriminate squander of a sizable portion of their time, “gifts”, and so-called “passions” on the lifelong pursuit of that which does not and, moreover, cannot guarantee some sort of material or social reward. Indeed, absent the promise of fame and riches, most men will in every case gild their “self-sacrifices” with a self-righteous moral gloss, an ardent self-deception that will inevitably coax him into believing his nonmaterial efforts, far from vain, are somehow working for the tangible benefit of the “collective good of all”; such ones who, having valiantly overcome the silver of Judas, now mistake themselves and all their works for some kind of world-redemptive Messiah.

In order to think any worthy thought at all, the mind must, on the one hand, be bound and conflicted on all sides by deadlines, worries, diversions, responsibilities, social obligations, moral constrictions, financial preoccupations, and the rest, while at the same time be animated by an irrepressible freedom to explore and evolve however it so will within a particular linguistic terrain that is open and unhindered by the aforementioned walls of worry and moral inhibition, the latter which, if not warred and struggled violently against, will tighten to the point of strangulation and eventual creative death. Indeed, that which is great of mind and truly deserving of the title “art” can only manifest when one oversteps, overcomes, and finally vanquishes their natural, self-imposed bounds and with them every care and expectation of the conscious world.