The Fall of Man, Bartholomäus Spranger

In light, then, of the Cyclical View of History as “the vacillation between epochs that are marked either by societal hierarchicalism or relativistic disintegration”, we can now begin to see the ways in which man’s relationship to Shame both precedes and precipitates the tragic fall from that “impossible point” to which hierarchy directs and orders itself: Shame and the unavoidable feelings of obligation and handicap towards the indebted past that it arouses (first to parents, grandparents, elders, heroes, legendary forefathers and so on) which consciously and definitively roots each successive generation upon the same evolving path towards the same transcendent source of Shame by which a given people can everywhere and at all times gaze, honor, worship and by so doing orient their fearful deference, the latter which must be practiced not merely by the lower, more servile members of society but, crucially, by those to whom the highest of all men must also look: priests, kings and conquerors, they who not only materially but also “spiritually” benefit the most from such hierarchical orientations; “materiality” which inevitably poses the gravest threat to the order of a society insofar as the sensual pleasures bestowed by materiality’s multitudinous accumulation(s) eventually desensitize men to the invigorating flames evoked by want, absence and austerity; desensitization which slowly begins to erode the aforementioned feelings of debt and obligation once felt so strong in those particular times that experienced, paradoxically, greater hardship, fewer ease and far less comfort; desensitization which naturally leads to moral disintegration and spiritual decadence, the latter which is not simply the enjoyment or even occasional indulgence in pleasure, but the release from the obligatory gratitude towards its ultimate Source; release which witnesses the most guilty gluttons of sensual delight – namely, those who sit atop society – begin to lose all sense of shame, duty and transcendent responsibility with the result that the lords of the land one day “awake” to find in the aftermath of their sense-mad orgy having arrived upon on an Edenic island, cut-off from any and all echoes of the past, a miraculous garden where convenience and easy sensuality is soon viewed as the “natural” state of things, derived from no god, no tradition, no work, people, past, history, memory; “naturality” which obscures and abstracts the former aesthetic clarity of Divinity into the vagaries of unsubstantiable “nature”, or worse, theoretical “principles” which are believed to govern the earth and stars from impersonal celestial thrones. 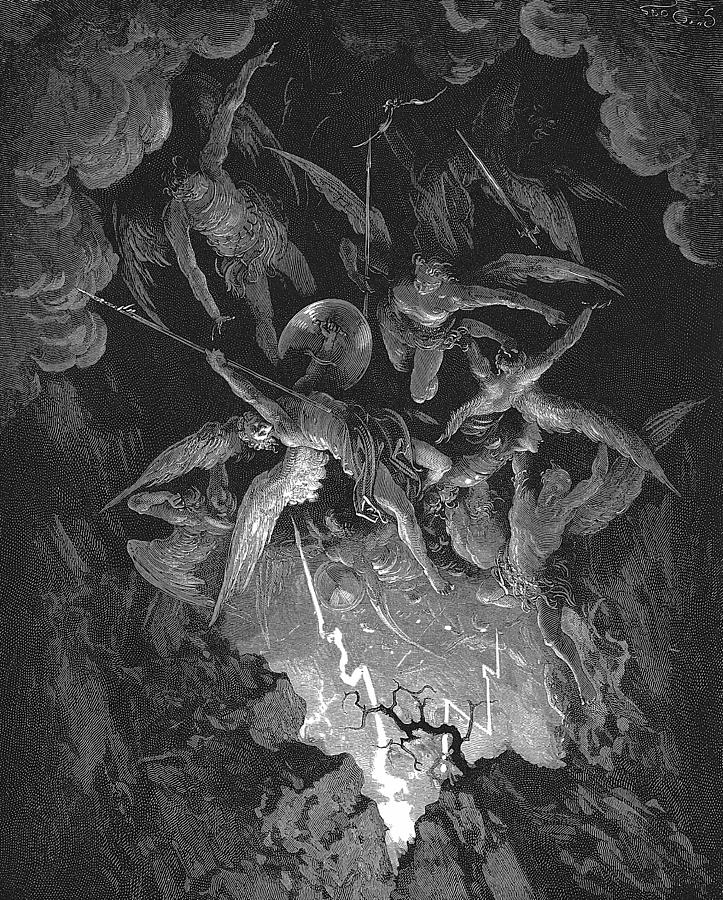 The Fall of Man, Gustave Dore

And with vagary comes inexactitude, and inexactitude disorientation, and disorientation inevitable disintegration, that which sends a civilization – now without fear of or even familiarity with The Tragic – down and away from that opaque and inaccessible point; descent that requires every potential “great man” to empty himself of all shame (or at least any claim to fulfill his obligation thereto) before positioning himself as that so-called “transcendent” force towards which his followers must ultimately defer but no higher, with the result his hierarchy begins to model itself in the image he believes himself to be, a phenomenon which sees the heavens retreat ever higher into the starry night, and the ceiling of man’s aspirations descend ever lower to basic earth.

“Novel” or “original” philosophical claims only arise from an environment of decadence and decay, just as great artistic movements, large advances in the sciences, sweeping technological achievements and so on.

What men call “progress” is always that which directs a people away from deity and spiritual order, towards man as “the measure of all things”: he himself his own personal god as the “natural” state of life and its conditions.

Given that all modern men are now sense-seared archipelagos of unending ecstasy, each emptied of the obligating shame that burdened our forefathers into servitude and obedience – emptiness that has severed every contemporary soul from the mental, emotional and experiential continuity with the past – any attempt to deny such an existential reality through the well-meaning (though ultimately futile) necromancy of some long-dead tradition, be it of a religious, intellectual or social type, condemns such a one to unconscionable inauthenticity and spiritual impotency: their opposites which are alone required to embody, ascertain and communicate the truest essence of an age.