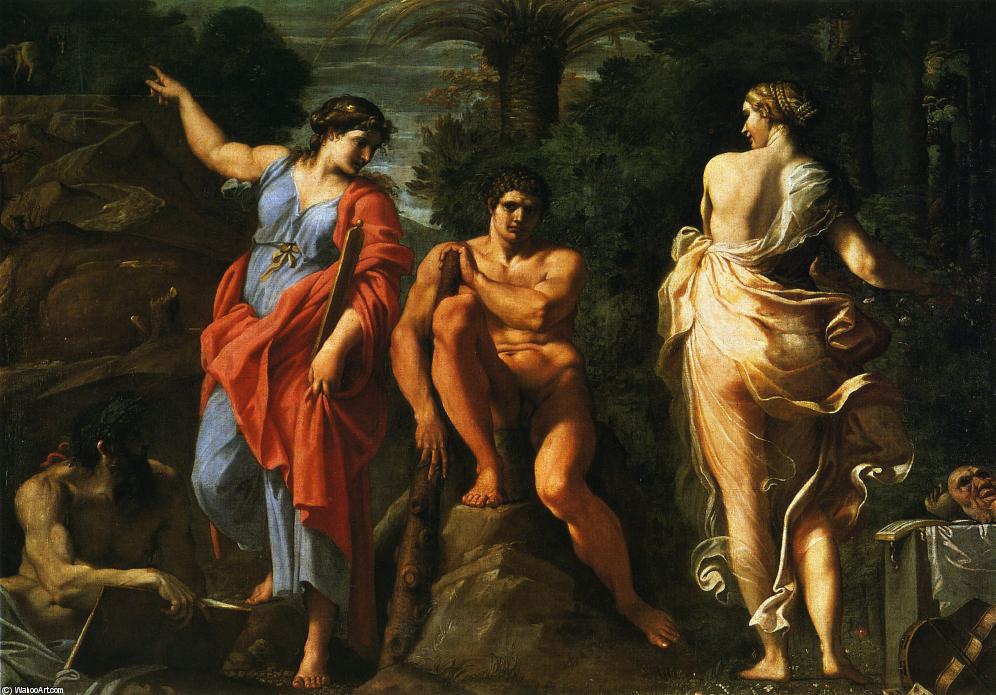 Hercules at the Crossroads, Annibale Carracci

Poetry, as the highest form of language, is also the highest expressive form of boredom available to man. This is particularly and perhaps exclusively true in “our” day. For poetry, in the modern West anyway, is not, under any circumstance, commercially viable, nor does it appeal to the mass sensibility that above all lusts after titillation of the senses and the tickling of each one of their ears. For all poets who consider the craft their life’s calling to the exclusion of all else are universally poor, sad, unlistened, and unheard and are each one rather strange and idiosyncratic too. They are stranger than even philosophers if such a thing was even possible. If this current view of poetry and poets does not tell you everything you’d ever need to know about modernity, nothing else will.

Because poetry cannot be reduced to an economic valuation, its pursuit – in addition to the fact that it is neglected by virtually everyone – can be thought of as pure and undefiled, which is to say reducible to any other goal than the joy of the pursuit itself which, as uneconomic and even anti-economic in its essence, can only come out of and also epitomize the beauty of boredom itself from which all worthy things originate.

For what of necessity? If something is necessary it can be optimized, codified, made efficient, systematized, programmatic, and thus dead, bloodless, lifeless, mechanical, robotic, and autonomous.

Even though, according to my gospel, man unequivocally has no free will, one should nevertheless live as though he had free will, which is to say, live as though every decision was completely and wholly one’s own so that at the end of the age a man will not be able to attribute to God the fault of such a one having been forced to do anything that might be contrary to God’s will in the life of that particular individual.

For, as it pertains to man and men, the notion of “freedom of will” does indeed liberate man from the shadows of rote obedience but burdens him with complete and total responsibility for the actions one takes.

At the end of the age, though man has no free will he will nevertheless be judged as if he had one and be held responsible for the things he did, whether or not God hardened his heart so that he might carry them out.

This offensive paradox is a circle that, through the reality of the truth itself, will never be squared.

Love and necessity are incommensurable.

God is love, He is not a necessity or necessary. For necessity, of course, posits some sort of cosmic need embedded in the fabric of creation which, such a line of thought presumes, supersedes the God who created it and all things specifically out of nothing.

Where in the Holy Writ does it ever say that “because so-and-so so freely loved God that God did….?”

Quite the opposite, in fact. For everywhere do we see “Noah found favor in the eyes of God,” or “Abraham found favor,” or “Moses found favor,” or “Mary found favor”, none of whom, being sinners before the favor was declared, ever gave much notice of God, or at least notice that was significant enough to be mentioned in scripture.

Because, the reality is, that even these heroes of the faith, only became heroes because God chose them as such and safeguarded His choice by ensuring their heroic deeds through the power of His Spirit who would enable them to carry it out.

For God leaves nothing at all to chance — amen. Love also leaves nothing to chance. Thus, love does not first require freedom of will to actualize its own being. As it is written, “we love, because He first loved us.” {1 John 4:19}

This notion, that if there is a sovereign God, there can be no true freedom of will, is perhaps the most difficult revelation of all to confess. It is, in truth, impossible to confess and can only be done in and by the most sublime psychological abstraction that might be possible. For everywhere and in everything does the life of reason speak in ways innumerable and contrary to this truth, so innumerable and contrary, in fact, that any attempt to affirm it is met with obscene levels of self-directed hostility and revulsion that (1) life could be so preordained, pre-directed and thus devoid of the so-believed spontaneity that makes it at all interesting and irresistible to embrace and (2) that God would be so tyrannical and unreasonable in the exercise of His sovereignty.

For I say again, man, by necessity, needs and no less requires the notion that he does not have to do something if he does not want to. For by it does he believe he is able to voluntarily enter life with the passion that life deserves and, maybe as man lives under the sun, it is so: he has choice. But from the realm of faith and the kingdom of heaven by which the world of reason would not be without, there is no will but the will of He who wills and only wills for His own good pleasure; that will which, through the work of Christ and the manifest power of the Holy Spirit also works and wills in the work and will and world of man.

What then of sin and evil in this world, which is so everywhere present and self-evident as to be undeniable except by the most amoral and destructively nihilistic of souls?

Live your life as if you had freedom of will, the responsibility of which that can and will condemn you to hell if you trespass and fail to throw your cares upon the feet of the God who cares for you, but know also this: God does and always has done all things according to His good pleasure.