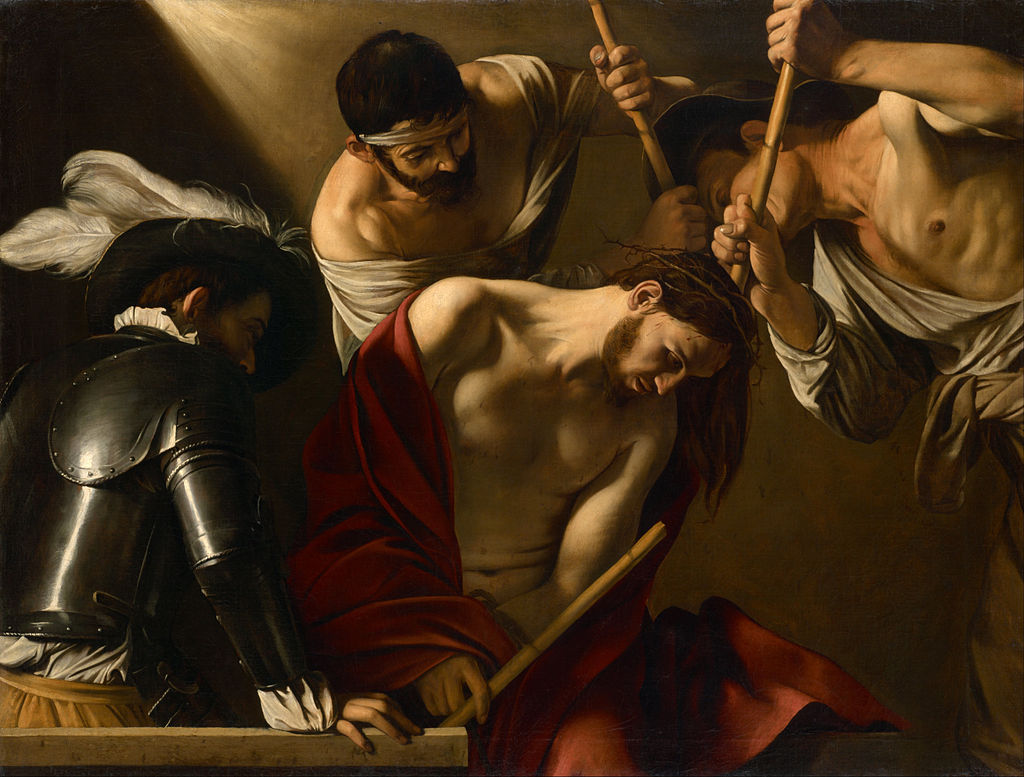 The Crowning with Thorns, Caravaggio

“We can see nothing today that wants to grow greater, we suspect that things will continue to go down, down, to become thinner, more good-natured, more prudent, more comfortable, more mediocre, more indifferent… Here precisely is what has become a fatality…together with the fear of man we have also lost our love of him, our reverence for him, our hopes for him, even the will to him. The sight of man now makes us weary—what is nihilism today if it is not that? – We are weary of man.”  – Nietzsche, On the Genealogy of Morals

“In the beginning” man fought on behalf of his lower, and at that time only, nature. Hardly distinguishable from brute beasts, the vast bulk of his energy was spent either pursuing more energy (of which he immediately consumed) or else satisfying his biological drives to which he was mere vassal. Unable to condone – much less conceive of – the costly quest for intangible gain, man instead sought objects he could sensually grasp and physically touch, realizable things like calories and shelter, access to fresh water and a nice dry place to light a fire and bed his women and discipline his little brats. Any instinct that may have potentially endangered these delicate resources was, as a matter of course, if not warred against then perpetually sublimated or otherwise pushed down and through his physical body so as to pass as a kind of dormant seed to successive generations whose natural conditions might better tolerate the prosecution of superfluous action.

In these primitive epochs, he who ruled was the man in whom the strongest biological drives found the strongest physicality, aggression and overall fighting skill, wit be (more or less) damned. It was thus the most barbarous, the most unbalanced and overwhelming, the most immediate, impulsive and “materially” terrifying who held sway the minds of men, gargantuan forces of nature whose deeds illumined the earliest myths; demigods etched in the pattern of mindless Heracles who knew no higher skill than the wrangling of sea-snakes and the pummeling of horse-men with oak-sized clubs.

As ages passed, however, and man’s collective knowledge of his local and bodily world(s) accumulated to the point where he could reasonably predict and thus provision for the future – especially of the unfortunate kind – a development that forced him to become increasingly aware of the cause-and-effect nature of time itself, there arose the question of what “to do” with time, how best to manage and otherwise “save” its excess in order to supply the needs of want with the largesse of plenty. By this did man begin to loosen the fetters that bound him to animalistic impulsivity in favor of the burdens of protracted contemplation, that which would eventually lead him to reckon himself as a distinct entity; consciousness that was the ground from which those latent seeds of immaterial longing could finally root and fruit: the longing for the non-biological and otherworldly, the vague and mysterious; the skyward, transcendent, futile, symbolic – all to say, the “spiritual”.

So it was through the expression of spirit, vigorous and unrelenting, did man discover the ability to project power by other means besides the physical and immediate, power which preceded as much as proceeded not only individual but collective action; power which, in some cases, was so compelling as to subjugate entire peoples by way of the fear, reverence and awe evoked by the eloquent communication of emotive words and symbols.

In this new paradigm, he who ruled was the man in whom the biological married also the psychological, linguistic and aesthetic, courageous and yet cunning men of action who matched a fluidity of mind with a dexterity of tongue, they who possessed the mystical ability to “command and convince”, particularly those beyond one’s immediate kin; men who distinguished themselves by displaying a certain willingness to die – either by flesh or reputation – for something beyond calories and women, beyond the gratification of the moment; a willingness to subordinate and transcend the natural limitations of fear, hunger, cold, doubt and unwillingness so that he might triumph in the fight-to-death struggle against the self and through it gain esteem and glory among his fellows. 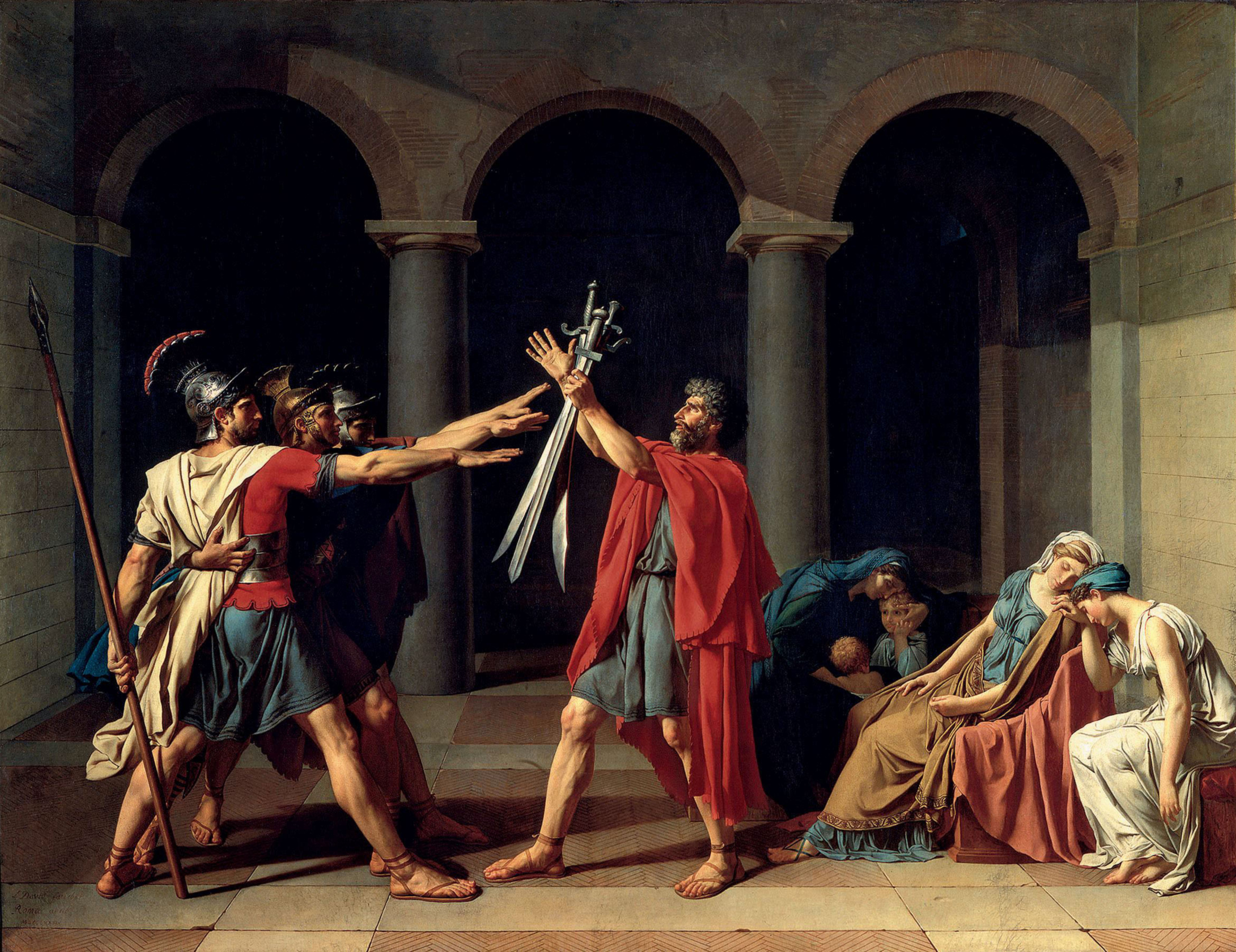 As the stories of these overcomers spread, so too their symbolic power flourished in the minds of distant men, the greatest seeing their influence evolve into political, economic and military terms. From this coalescence emerged the earliest forms of what could loosely be defined as “culture” and, through its accumulation, civilization: the moral and symbolic amalgamation of various blood-strange groups who, because they shared a common leader and climate, a common topography, natural history and caloric source but lacked the social ordering that had always dwelt in and among the implicit gestures of the tribe, demanded that a language be devised so as to explicitly distinguish and organize its constituents according to the essential substance that animated each societal gradation; a language that defined the protocol for the proper interaction of all the gradations; that which taught a society how to deal prudently with equals, reverently toward betters and gracefully with inferiors; protocol that was, more than anything, charged with guarding and cultivating the noble expression of honor: that irreplaceable sentiment that serves as both structure and bond for the social apparatus without which “a people” cannot stand; honor which not only serves as the vehicle for spiritual aspiration, but enables that aspiration to find its proper cultural recognition and contextual appreciation.

For the moment the soul touched even the outer edges of transcendental expression, gone to it forever it was, never again to be ultimately satisfied with anything the world could offer in and of itself; dissatisfaction whose remedy becomes the soul’s only reason for being once perceived. Such is why a race, whether reckoned in nationalistic or civilizational terms, in order to sustain and evolve, must not only be rooted on a spiritual foundation but have as one of its guiding principles a reverence for that spirit; reverence not merely encouraged but unquestionably demanded in each one of its parts, regardless of station. In its absence, man, principally marked as he is by the will to become and having thus no choice but to go somewhere, cannot keep himself from descending into prior forms of animalistic gratification, the kind which, because their ubiquitous ease renders them so immaterially unfulfilling, rouses in him an even greater desire for the antidote that only spirit can provide, the kind which first raised – and has kept – the human creature above the all the other beasts of the field since the moment we first reckoned ourselves different than they, as “man”.