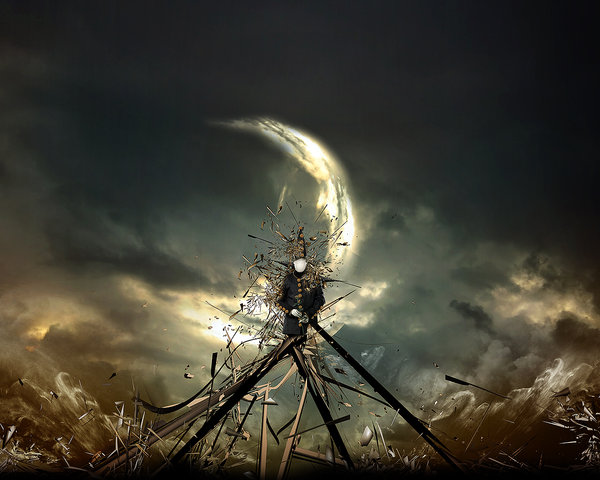 Notwithstanding anything to the contrary, Nihilism is a gift. Even a holy gift, however impossible it is to see it as such amid the teeth of a man’s confrontation with it. For in Nihilism am I able to cut through and cut away everything that is worthless and pitiful, naive, superficial, deceptive, and weak, and through its lens am I able to see all things as they are no matter the protestations of the naive world that would claim otherwise. I, for one, refuse to place the entire superstructure of my existence upon the head of my wife and children and make them my “reason for living”. Such reason-making is idolatry at its most subtle and elusive and my family should never be asked to hold such an impossible burden. No, to the Christian Nihilist, only God has meaning, and only He can bestow it upon those whom He alone chooses and, because He has chosen, will receive it and them as such. As for me, I suppose, I am not one so chosen. Chosen for salvation, hopefully, but not the gift of abiding transcendence and purpose, at least not yet.

As a man lives then, Nihilism, if considered in the way that it ought and the way that God wills, should be considered a blessing, for if one is granted the power to overcome it, then such a one can only become strong as a result. Indeed, no other psychological, intellectual, or spiritual resistance known to man has the power to make him truly strong in all things as does Nihilism. For through it, man is able to dispense with any and all false notions of his own superiority and purpose. For, in the end, if anything is not given of God, it has no purpose, only “sound and fury, signifying nothing.”

“Therefore, God, even though it pains me to confess this: thank You for Nihilism, inasmuch as to boast in one’s weakness makes Your name great, and in weakness is Your power perfected.” {2 Cor 12:9}

Nihilism is the only truth of man who lives “under the sun”. The hopeless aimlessness of life lived in the flesh, that which can indeed be reduced to a ceaseless striving of greater and more nuanced perceptions of superiority, that which has been called elsewhere as “the will to power”, is the only “transcendent” truth that carnal man has the power to intuit. As such, just as any “transcendent” reality, it cannot be “overcome” by the will of finite creatures any more than any other Truth that may issue from the throne of God.

Truths are eternal and man in his flesh is not.

Kierkegaard is utterly wrong, if I am reading him correctly, when he asserts that the highest of all possible ends in human life is self-individuation, which is to say, to become or else “know oneself” as an “Individual”, to be “self-sufficient” in ones own ideas and opinions and thus completely responsible for all that one says or does, thereby purifying one’s motives and actions; the individual who is also, apparently, free from all worldly entanglements, group associations, familial affinities and cultural pantomimes that so often supply lesser souls with all the reason they would ever need for being but, in turn, keep them from the ultimate knowledge of themselves as an individual made in the image of God, which, as far as human reason is concerned, is the knowledge of all knowledge. Such individuation, in which a man disassociates himself both emotionally, intellectually, and aesthetically with and stands utterly apart from “the group”, whether that group be on the nuclear level of blood, kin, and friend, or the higher and more encompassing communal level of one’s given culture and overarching civilization; individuation which, once achieved, allows one to be grounded in the authenticity that was lost in man’s fall from God’s unconscious grace; grace which his soul has, since those troubling times immediately following the fall, perennially longed for and gone to the ends of the earth to find, but that which when found, alienates him from those things that he sought to disentangle himself from, those things which do not know themselves as their own individuals; alienation which, if the individual continues in his authenticity – which he will because he cannot do anything but, for “he” is “who he is” from that time forward and cannot be anyone or anything else – will also bar him from ever returning in a good and clear conscience to the self-immolating embrace of those aforementioned unconscious collectives, leaving him a lonely wanderer on the earth cursed everywhere with the mark of Cain which disallows him from ever finding a lasting home on the earth or even a fitting stone to rest his weary head.

Though such individuation is, in my humble opinion, absolutely necessary if one seeks to honor God with the most precious of all sacrifices, that “sacrifice” which true “individuals” know they are slaying when they, alas, call out to Him as “Abba”. Individuation is, however, only a false peak on the mountain of life. Truly, if I was to die only with the knowledge that I was an “individual”, lonely and forever separated from ever knowing actual communion with another, I would have many regrets of having wasted my life for an unattainable ideal. No, as eluded above, the chief end of life – of which I now confess by revelation not of this world but given from above – is to offer oneself to God as a whole and living sacrifice – as “an individual” – with eyes fully open to its eternal ramifications and in the clearest of all possible consciences and in the good faith that can only be given by the Spirit of God; an act that makes even “great” individuals, yes, even the “best” of individuals, nothing at all in the kingdom of God – indeed, as it should be, truly as it will be, and inescapably is.

For those that are chosen of God before the foundations to be His flock are to be sanctified through the suffering that only the Holy Spirit can bring a man through and because He brings him, also provision him so as to ensure that he survives and even thrives in its wake; this sanctification through suffering which is meant to mold men into the image and likeness of Christ who “although Himself a son, learned obedience through what He suffered”. {Heb 5:8} And if our bridegroom suffered in life so must we, yes, even we who suckle from the fullest tit of the decadence of any age.

For the chosen are to be united with Christ forever and for all times and this, of course, cannot be consummated if one obstinately remains an individual.

Man everywhere seeks self-immolation and self-abnegation for it has been born in his heart by God who intends men to return to His unmediated communion and intimacy, the likes of which see no distinction between man and God, nor man and man redeemed of God. But he who does not know this nor know himself as a free-willed and free-willing individual responsible for his own standing in this world and the world to come will, as a fallen, broken, sick creature, seek the self-abnegation reserved for and by God in mass movements, and prophetic ideologies, and cultural phenomena of various kinds, and in cliquish subcultures that promise them the same things that the Father promises His beloved: that they will be nakedly and unashamedly known and that they will know.

So no, the highest end of man does not stop at knowing himself as an individual – as per the so-called “existentialists” of the past century and a half – but to take that self-individuating knowledge as far as humanly possible and to then leave it at the feet of the cross of Christ so that it may bring Him glory. For in all things, “He must increase, but {we} must decrease.” {John 3:30} This is the end of the law of God written on the heart of man. We long to do great things and to bring those great things to the throne of God in order to show us how small and ineffectual even our “lavish” offerings are in light of the offering that the Father made in the sacrifice of His Son, which is truly lavish. In so offering to God his best will the free-willing individual, in light of the true power and majesty of “what is” – that which brings a man’s great deeds and accomplishments to naught – become better acquainted with the things that He has done for us, and in that knowledge cry out and cling to Him more, thereby realized his self-abnegation, the same self-abnegation experienced by all the saints of God throughout time whom through the greatness of their deeds for God – made possible by God – cast such crowns of temporal glory as an offering before the throne of the lamb which enables such ones to see the commensurate impotency of the things they did alongside the awesome majesty of Christ and be granted this holy and eternal knowledge, these same saints whom the Individual, in his freedom, is fully and unashamedly invited to associate himself with.

God does not need. He may want perhaps, but He in no way needs.

To say otherwise is blasphemy wherever it may be thought or found.

Ethics and freedom are irreconcilable.