Massacre of the Innocents, Rubens

In order to think any productive thought at all, which is to say, the kind of self-possessed notion worth having, one that augments a man’s ability to self-sufficiently navigate his own life and world, the Intelligent Mind, insofar as it will no doubt be an educated mind reared, most probably, in the history of ideas his people, must – in light of the dialectical reticence that such education will unavoidably force upon him – be unreasonably prejudicial, intolerant, severe and oft-irrational in his mental doings, taking as his governing image the Aristocrat over the Scientist, the former who, despite the manifold missteps brought about by his own naivete, grandiosity and ignorance, as a man of discriminatory action does indeed go somewhere (however tragic); the latter whose fear of ignorance and tragedy, combined with his own dialectical tolerance for all “reasonably enlightened claims”, so often prevents such a one from going anywhere in himself at all, and on those rare occasions when he does, in no direction but down towards the considerations of the broadest consensus: science and democracy which cannot exist and will eventually fail without the other, the former which, if it is to remain as it has been hitherto understood and practiced, is the mental and intellectual machination of democracy itself: the conceptual rule of the common good and common sense, the deductive, decadence, pensive and anti-artistic.

Long sentences, laboriously maintained, permit the intermittent glory of shorter ones: those that require not a single qualification or extraneous condition to stand in their own self-sufficient glory: the Maxim as the Lettered Man’s reward for all his circuitous clauses.

The practice of pity and other such feminine hysterics,  those which unconsciously assume that a universal ethic exists and has been explicitly broken by a readily identifiable party, through its intellectually and emotionally shallow assumptioning is thus by nature imbalanced, superficial, unendurable and immature, prone to the wildest manias roused by the easiest, most apparent and least sophisticated insinuations; a disposition too feeble and weak to aesthetically sublimate, much less philosophically entertain, the notion that certain “opposing forces” do, in fact, exist and must, to say nothing of the indispensable value their struggle holds with regards to the development of virtue itself; virtue which arises out of the conflict between opposites and is thus the only mechanism by which strength may be attained and health, as well as any possibility of upward greatness; pity which, by way of the perennial psychosis that forces it to look, in time, only down upon every head-bowed crown of the alms-stretched mass, cannot but fill the pitier to overflowing with disgust and detestation for the human species as a whole; disgust that either compels the beholder to differentiate himself therefrom by modeling his own image according to the pattern of those great and terrible tyrants who loom always above and before, or, turning inwards, leads such a one to associate himself with “them” and “their plight”; association that forces a man to roam far and wide for a cause of his own brutalization and suffering, a search that, finding always a ready source in those who obviously are, in fact, greater and more beautiful (if grotesque) than the masses, too quickly dissatisfies the seeker, causing him to lower the standard by which greatness is measured so that a more expansive study may occupy his time, one that will again exhaust itself with its new sources, requiring the bar be lower yet once more, then more, more, with the result that greatness eventually becomes only marginally differentiated from “good” or “average”: the Pitier who inevitably becomes indistinguishable from the practice of Pity itself. 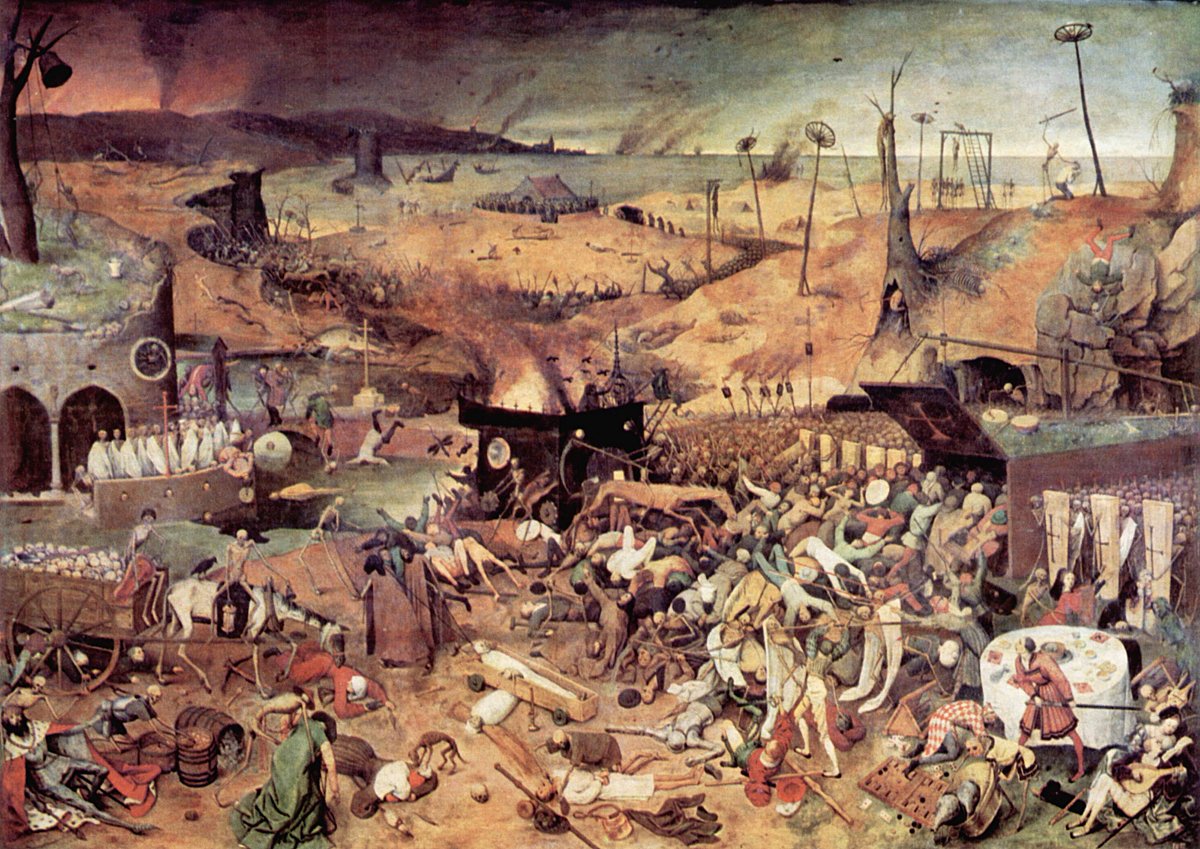 The Triumph of Death, Pieter Bruegel the Elder

Notwithstanding the rather ill-formed and historically groundless claim that we moderns live in excessively oppressive times, the contemporary man, in fact, enjoys more freedom than he ever has in the whole history of the race, specifically with regards to those cultural and social forces that implicate and assume a man with the most rigid and unwieldy emotional burdens, those which take the form of familial and communitarian relations: deference to one’s own, one’s parents and elders, one’s brothers, sisters, neighbors, children, language, gods and culture.

No, the great and terrible tyranny of our age is sentimentality and easy emotionalism, those which rouse and are aroused by the basest, lowest, most simplistic, direct, unsophisticated and in this way “feminine” elements of an individual body and the society in which it lives; emotionalism that foists upon man the most sensational, morally unquestionable and thus persuasive of sentiments, those which are primarily expressed through sympathy, pity and great moral outrage; emotions which – polemically biased as they are through the absence of subtlety and style – leave a man completely exposed, vulnerable and thus manipulable to whatever loathsome, diseased and detestable thing weeps loudest and grimaces most woefully, they who, in a society such as ours, become as friars and village pastors (however so contorted and disgusting), they who are but tools and pawns of the true overlords who reign not merely over the minds of contemporary man, but also his bodily organs.