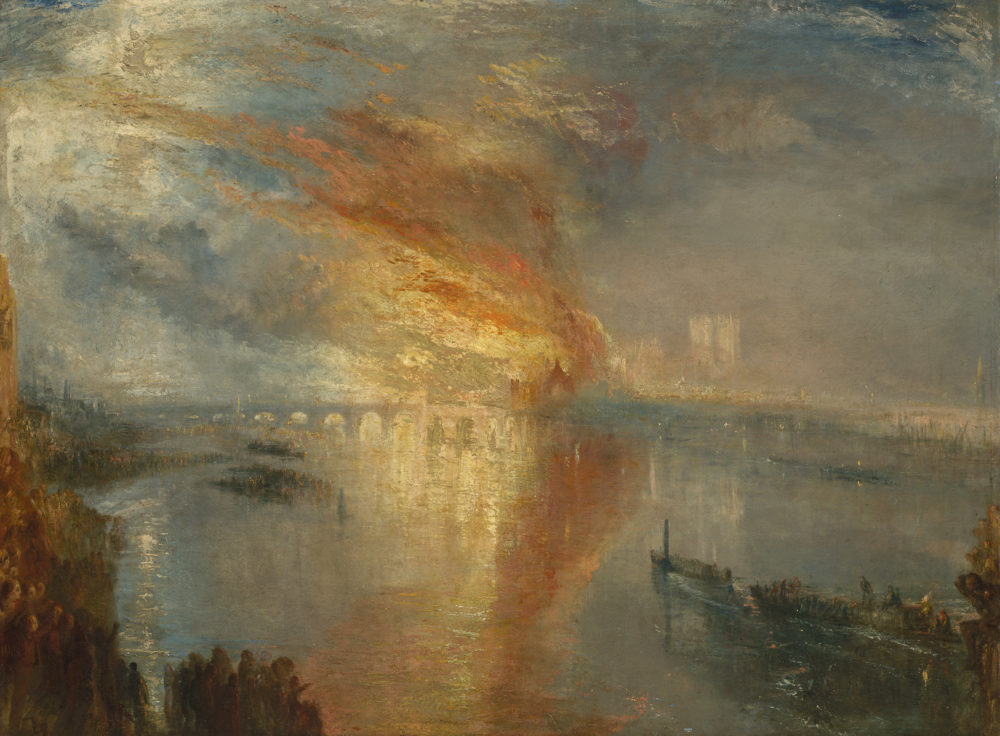 The Burning of the Houses of Lords and Commons, JMW Turner

Only in the crystalline light of reflection and the sublimity of unhindered contemplation of the full breadth of my work from “Man as Smell” until the present am I able to more aptly see the very direct, very distinct, and unerring spiritual and intellectual path that the Spirit of God has placed me on; that path which began when He judged and slayed the idol of my youth whom I wrongly considered the one true God but was, in fact, a well-meaning fabrication and a liar whose death nevertheless sent me reeling in pains and chains into the desert of faith in which I roamed – seemingly absent of any God and bereft of the conscious leadership of the Holy Spirit – for over ten years: from my realization of that false god’s death in “Man as Smell”, over the bridge of my “Cosmogony”, unto my world- and history-splitting epiphany in “That Brutal Steed”, all of which found their plain and obvious synthesis in “Ex Nihilo” in which God emphatically made clear that I was His own, and finally unto the offering you have in your hands now, my “Good Dog” which is a triumph of the leadership of He who loves my soul and will maintain unto the end, never mind if I, in my own “good” senses and soundness of mind, would actually want Him to.

Indeed, “Man as Smell” was composed in the psychological bewilderment of the self-implosion of the highest of all values and completed amid the emotional wreckage of the failings of that well-meaning false god. In it I defined, if only for myself, the grounds for and identified the horizons of the “aesthetic life of experience” – one devoid of a god or any consensual value that might tether a man to any sense of truth whatsoever. It is the unawares expression of nihilism that has not been uttered since Nietzsche, perhaps. In “Cosmogony”, I fleshed out and more clearly backfilled the aesthetic possibilities of this nihilistic “realm (or life) without God” to include all its myriad implications (which are not very much in number and all lead to a singular end). In “That Brutal Steed”, having perhaps delineated the furthest possibilities of life without truth and without value (not that I had expressed its every innumerable particular but certainly the few premises for arriving at those particulars), my spirit was left without any more “philosophical lands to conquer”. Thus, perhaps out of a wanton lust for such lands, my psyche had no choice but to break through the conceptual limitations of reason, limitations which are inherent to and inexorable with the subjective experience itself (which in other places can simply be reckoned finite “life”); that breaking-out which lead me to not merely posit the possibility of an “objective world” from which we might have originated but actively exploring that very thing: that “objective world” which was our consensual slavery to the will and words of “the gods” (which the one true God has made clear to us were actually “demons”) as well as our indifferentiation with other men, such compulsory indifferentiation which predominated the whole of human “experience” before the “fall of man” into subjectivity (that fall which created every known and unknown “thing” that might ever be conceived), subjectivity which we are still trapped and entrained; “trapped and entrained” that is, until rescued therefrom and redeemed thereout by the Holy Spirit of God (made possible by the work of Christ’s cross) who alone chooses and has power to ferry us into (or “back” to) the objective life and divine communion from which our ancient forebearer fell. Finally, my “Ex Nihilo” was the revelation of this entire process which had been gestating for nine years in me, and the further revelation that the one true God had not, in fact, died, but merely the false and impotent idol I fashioned to resemble Him.

It can generally be said, when it is revealed to man the false God that one had been worshipping, the actual God (or god) that a man has been secretly devoted comes more vividly to the fore, “my” God who, as this present works attests — is also creator of that is and ever will be; He who called not by my will or work or because I, in my flesh, would ever desire it so, but by and through the will and work of He who alone does the willing and working, He who is the God of all who lives forever and cannot die nor ever will: Jesus Christ who kept me only because I am His, to whom be the glory, beauty, power and truth as well as the purpose and reason for every written word for all time forevermore; His glory and truth which is, God-willing, everywhere expressed in the humble pages of the book you are holding, of which was composed in three months amid an outpouring of love, gratitude, and passion toward Him who loves my soul and saves it; my salvation that is based not on anything I have done or ever will but by His sovereign choice of which the whole of my work has been concerned and aimed and nothing besides, even if my earlier writings did not pretense it so.

Indeed, His sovereign glory is able to save us even from ourselves and even from nihilism (the spirit of which visited me in the strongest form that it had ever in my life midway through the first composition of this text); nihilism which, in short, is the starting place of a sincere Christian life. For man must be ruined for any trust in, love or hope for the delusions of this world before such a one is ready to receive the Spirit of Truth without condition and by it, know the saving grace of God by the faith that He alone promises to impart for His own glory so that His own sheep might be saved from the world’s limitless futilities, among much else. With He and His choice alone as one’s salvific foundation, “I am convinced that neither death nor life, neither angels nor principalities, neither the present nor the future, nor any powers, neither height nor depth, nor anything else in all creation, will be able to separate us from the love of God that is in Christ Jesus our Lord.” {Rom 8:39}

To His glory I dedicate this work which is and has always been His.

Indeed, if God can patiently maintain the soul of one so rebellious, intellectually conniving, and ruthless as this writer, He can keep any a backslidden and wayward soul of one whom He loves without cause or condition and has effectually called according to and for His good purposes. Upon that faith will the “gates of hell” be unable to prevail unto the end of the age.