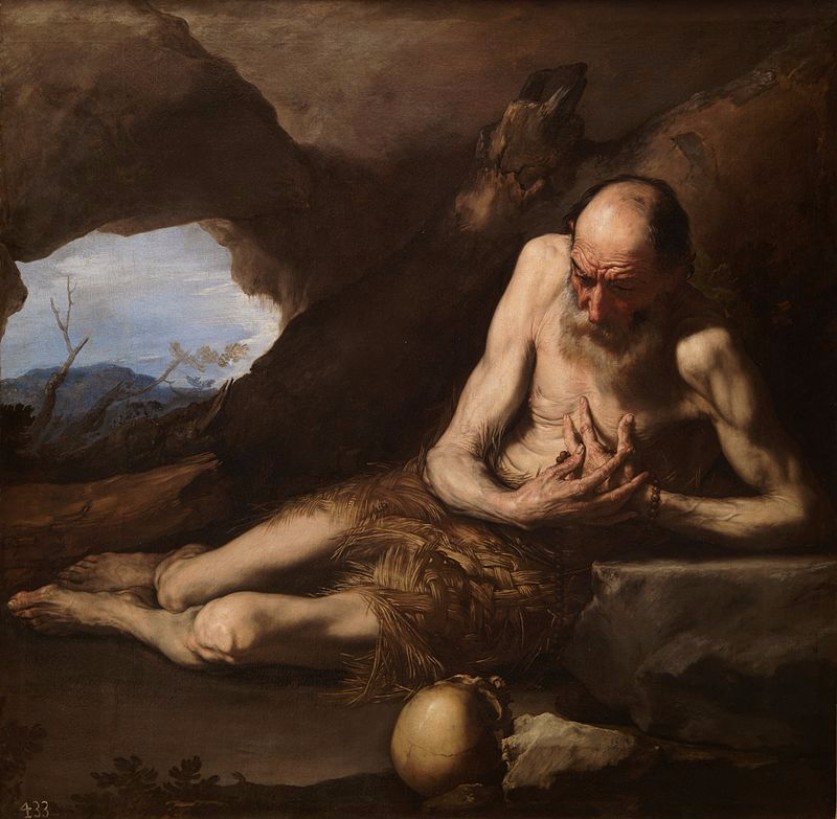 The Life of Saint Paul the First Hermit was composed in Latin by Saint Jerome, probably in 375–376. Paul of Thebes was born around 227 in the Thebaid of Egypt.
Paul and his married sister lost their parents. In order to obtain Paul’s inheritance, his brother-in-law sought to betray him to the persecutors. According to Jerome’s Vitae Patrum (Vita Pauli primi eremitae), Paul fled to the Theban desert as a young man during the persecution of Decius and Valerianus around AD 250.
He lived in the mountains of this desert in a cave near a clear spring and a palm tree, the leaves of which provided him with clothing and the fruit of which provided him with his only source of food until he was 43 years old, when a raven started bringing him half a loaf of bread daily. He would remain in that cave for the rest of his life, almost a hundred years.

Paul of Thebes’ visit at Anthony the Great
Paul of Thebes is known to posterity because around the year 342, Anthony the Great was told in a dream about the older hermit’s existence, and went to find him. Jerome related that Anthony the Great and Paul met when the latter was aged 113. They conversed with each other for one day and one night. The Synaxarium shows each saint inviting the other to bless and break the bread, as a token of honor. St. Paul held one side, putting the other side into the hands of Father Anthony, and soon the bread broke through the middle and each took his part. When Anthony next visited him, Paul was dead. Anthony clothed him in a tunic which was a present from Athanasius of Alexandria and buried him, with two lions helping to dig the grave.
Father Anthony returned to his monastery taking with him the robe woven with palm leaf. He honored the robe so much that he only wore it twice a year: at the Feast of Easter, and at the Pentecost.