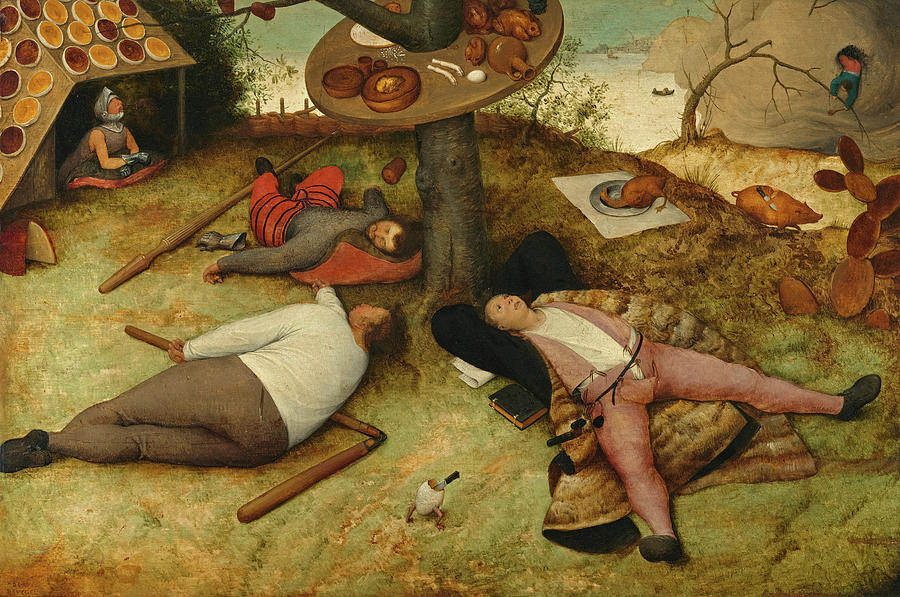 The Land of Cockaigne, Pieter Bruegel the Elder

God, it must be stressed, is not His creation. Nor is He “the will” of the will to power nor can He be reduced to any “thing”, whether such a thing is actual or a fabrication of the minds of finite men. God is transcendent to everything and all, even transcendence itself. God cannot, therefore, sin. Though His creation might sin – even the planets that stray from their lonely orbits, God cannot. For He is not sin and has no place at all for anything outside or contrary to His own nature.

God is whole. He is actual.

He is not a part of, nor in any way a member of His creation.

Only members of a whole can sin, typically against the whole to which they erroneously believe they have no part. And not merely against certain aspects of the whole, but the totality of the whole itself which is, of course, God. For, as it is written, “God cannot deny Himself.” {2 Tim 2:13} In much the same way can we ascertain through this that God, as whole and even transcendent to the whole, cannot sin, as whole, against Himself who is the whole.

There is, indeed, nothing that God can do that is contrary to the whole of which He is. Any contrary action is only a perception by the ineptitudes of man who cannot see the totality of the whole from his inferior position.

What is sin to man is indeed sin to other members of the whole, the same as it is sin against God who is the whole. But, inasmuch as God cannot sin against the law of which He is, He cannot be the author of sin among His creation nor the instigator of such, for to do so would mean that God would sin against and thereby also deny Himself, something He cannot do.

(For, if He did, I dare say that the whole created order which He works through and in would cease to be entirely. For if ultimate reality was to deny the truth of its own being, it forfeits its own ultimate status and thus negates the truest essence of itself and thereby immediately ceases to be, eternally, even if the denial was only “temporary” which again is impossible insofar as ultimate reality is formless and also timeless, eternal, and omnipresent.)

That God, however, has a right as sovereign judge and Lord over the will, actions, and consequences of His members is, of course, the province that only God, as God, enjoys.

That His members sin and do evil against the whole is, of course, abhorrent to God and demands a just recompense, but that He might find Himself surprised that such acts occurred is also impossible. (For Christ the Son enabled the formless timeless Father to attain a form so as to experience the joys and pains of His own creation.) For if we say that the Father is ultimate, transcendent, and eternal – in short, everything that we, His creatures, are not – then He would know when and to what extent we would ever sin. And in not being surprised by it did He send His suffering servant Son slain before the foundations of the world to die, at the fullness of time, for all sin everywhere proves His sovereignty and His foreknowledge of all things for all time everywhere.

Yet, to claim that God does not will sin nor is the author of sin, in light of the fact that His people sin – even those redeemed by the blood of the lamb – is such an eternal quandary that cannot and will not be answered here is these trite little aphorisms.

There are either individual wills or there is a single will. How one answers this question is of ultimate and eternal importance.

1) God is not the author of sin and cannot deny Himself who is whole.
2) God is fully sovereign over His creation and knows all that occurs and has always known since before the foundations.
3) Yet, man sins and, due to his sin, causes the entire created order to sin, even those who have done so after the saving grace of Calvary unto the present day.
4) Man has no freedom of will. Only God has will.
5) Thus God must will that man sins against Him and His will which, as it is written, is impossible. {Hebrews 6:18}
6) Further, if God is the only will and men sin and are found guilty of their sin, as they rightly should, how does He still find fault? Is God unjust as the ages have justifiably claimed?

The only help we get in scripture that addresses this justifiable claim is: “What shall we say then? Was there injustice on God’s part? By no means! For he says to Moses, ‘I will have mercy on whom I have mercy, and I will have compassion on whom I have compassion.’ So then it depends not on human will or exertion, but on God, who has mercy. For the Scripture says to Pharaoh, ‘For this very purpose I have raised you up, that I might show my power in you, and that my name might be proclaimed in all the earth.’ So then he has mercy on whomever he wills, and he hardens whomever he wills.”

“You will say to me then, ‘Why does he still find fault? For who can resist his will?’ But who are you, O man, to answer back to God? Will what is molded say to its molder, ‘Why have you made me like this?’ Has the potter no right over the clay, to make out of the same lump one vessel for honorable use and another for dishonorable use? What if God, desiring to show his wrath and to make known his power, has endured with much patience vessels of wrath prepared for destruction, in order to make known the riches of his glory for vessels of mercy, which he has prepared beforehand for glory – even us whom he has called, not from the Jews only but also from the Gentiles?” {Romans 9:14-24}