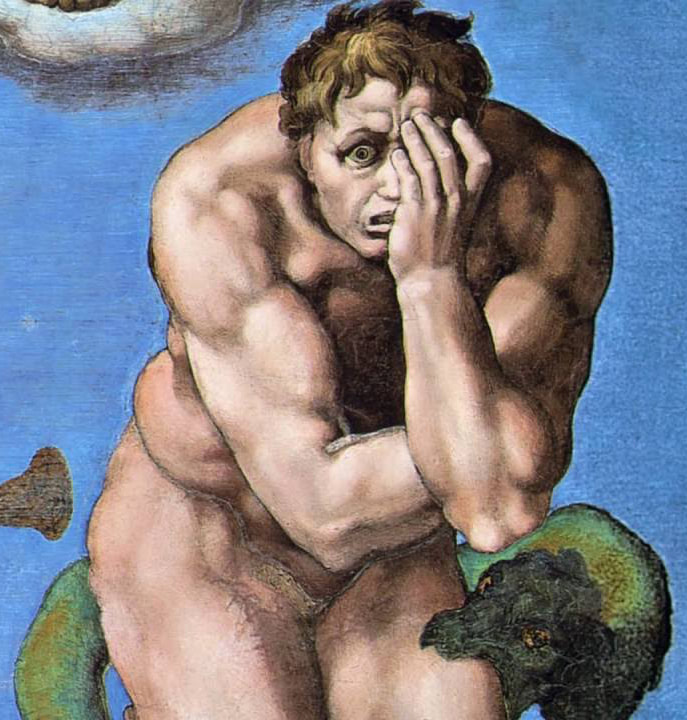 It is only because we live in modern-day egalitarian nations in which all semblance of sacred authority and the unquestionable, total, and immutable sovereignty of the earthly monarch has broken down completely and been replaced with the doubtful scrutiny and skeptical cynicism we nowadays feel toward not only our betters but to everything ever encounter that we can even pose the question: “how and why does God still find fault?”

Because I am a modern, I feel compelled to ask: how can there be both sin in this world and also God who did not create it nor in any place ever endorse it, but yet still holds man fully responsible for his sin, so responsible that He is willing to allow such sinful creatures to die in their sins and be sentenced to an eternity in hell? And if this is so, is this a God that I in my own good senses would ever want to follow and profess fealty and love?

The answer, in the clarity of my reason and in my good, clean, and sensible rationality, is unequivocally no.

Such is why I am filled with the confidence that it is not me who chooses or would ever choose to follow God in spirit and truth but only the Spirit of Truth working mightily within me to do that which my flesh and my carnal nature instinctually revolt against and for good reason too.

Oh, the depth of the riches of the wisdom and knowledge of God!
How unsearchable His judgments,
and His paths beyond tracing out!
“Who has known the mind of the Lord?
Or who has been his counselor?”
“Who has ever given to God,
that God should repay them?”
For from Him and through Him and for Him are all things.
To Him be the glory forever! Amen. {Rom 11: 33-36}

The offensive scandal of the cross says: “God is fully sovereign and man is fully responsible.” So great is this offense and illogical and even absurd its insinuation that indeed a supernatural power is required to accept and embrace it.

Because sin is total, infecting the very marrow of a man’s bones, salvation must be total.

Indeed, the cross of Christ is far too offensive to accept and its requirements utterly impossible to accomplish with anything that the flesh of man may have at its disposal to overcome these offenses and carry out these righteous requirements without first the Spirit of God working and doing all on his behalf.

“If there is one thing I know without a shadow of a doubt, it is that nothing good dwells within my flesh, no not a single thing.”

No man would be willing to suffer pain, loss of property, torture, and even martyrdom if his belief was dependent on his own free will, personal bias, and choice.

There were only two human beings with free will who ever lived: (1) Adam and (2) Christ.

Consider the consequences of Adam’s inability to do with his free will what God intended, this man who “walked with God in the cool of the day”. {Gen 3:8} Consider then how contrary the will of Christ is to that of Adam, He who was forsaken by God when He needed Him the most {Matt 27:46} and yet did not abandon His faith and sin.

Man so often minimizes sin, thinking it somehow partial to his person, not corrupting his every bodily cell and thought of his mind. If we minimize sin, we will elevate man’s free will and make it an idol commensurate to the degree we minimize the consequences of sin.

I, for one, want God to take over my own will completely. Because in my flesh I will never love God nor will I ever be able to honor or glorify Him. Indeed, because nothing good dwells within my flesh, it is only His Spirit working and speaking through me who speaks and does good.

“Take thus control of me, God, completely and utterly.”

If ever the ease, decadence, and peace of modern life were to make overweight and slovenly my soul, as Nietchze said concerning times of peace: “the warlike go to war with themselves.”

As I’ve said innumerably before, man most often worships that which he can at least fathom and perceive, that which behaves fundamentally like him, only better and more consistently. Life, especially Christian life, can thus not be reduced to suffering because if God be like us – only better – then surely He would want to temporally bless us with healings, and a stressless life replete with, if not worldly riches, then at least the comforts common to the average level of the society in which we live — the same as we, if in a similar position as God, would endeavor to bless our earthly children, even though we are evil. {Matt 7:11}

God cannot be reduced to a mere Value, even the most sacred of values.

For He transcends all Values.

Pity and love, in the heart of the Christian, must be separated.

For God has separated such things.

Pity is an expression of the will to power and superiority of the weak over those who are deemed weaker still.

Pity is impotent. Pity does nothing. In fact, God has no part with pity. For He does not “will to” power anything. He is pure will, and thus pure power. Purely pure purity, which is power.

Pity does nothing but create more of itself.

Pity is the weak man’s expression of mercy; mercy which, given his own lowly estimation of himself, has not the virtue, honor, position, privilege, or rank to actually express.

Mercy and compassion are the province of the strong and able.

The grace of God is so repulsive and offensive to the reason and flesh of man principally because it is so inexplicable to man’s reason as to where and upon whom the wind of the Spirit blows. As it is written: “The wind blows wherever it pleases. You hear its sound, but you cannot tell where it comes or where it is going. So it is with everyone born of the Spirit.” {John 3:8}

Indeed, if the will of the Spirit of God was in any way comprehendible to the mind of Reason – lo, even the reason of those who profess Christ – God would have infinitely more professors in Him, by many orders of magnitude, even in light of the other conundrums, incongruities, and offenses that the cross of Christ everywhere lays bare before the feet of man.

Only in boredom is truth found.

Indeed, there are two chief questions that beset the conscience of man, whether believer or unbeliever, from time immemorial: “God, why have you cursed me so?” and also “God, why have you blessed me so thoroughly and completely?”

In answering these two questions is God equally glorified. For His grace and faith is holy, as is His wrath and judgment.

Even a man’s confrontation with nihilism – and all the psychological, emotional, and spiritual consequences that might come from it – does not surprise Him who knows all and wills all and yet works all things for the good of those who love Him and are called according to His good purposes. {Rom 8:28}