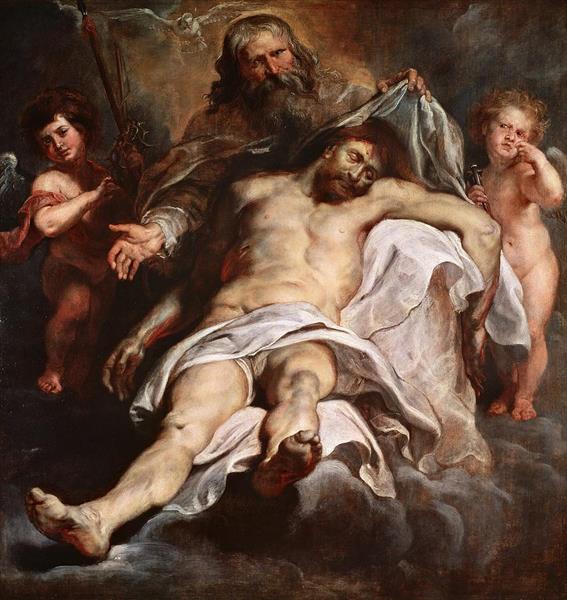 That God did, in truth, appear in various forms to man throughout history and, at the so-called “fullness of time”, appeared quite plainly as Christ to man “in the likeness of man” {Phil 2:8} in no way negates the essential Truth of God, which is to say, that He, as God, is both formless and timeless, but, in fact, highlights the distinctiveness of the Trinity: that each personality within the Holy Family assumes the role by which God had collectively preordained for each to have before the earth’s foundations were laid, and that these distinct personalities carry out their respective roles in the manner that they will, as they have since those foundations were laid unto this present hour and will continue to do so into the future until, alas, the notion of “future” is obliterated.

The Trinity, which men have inadequately and deceptively analogized with “water” in that such a substance also appears in three distinct though irreducible forms. Yet, water is not three distinct personalities as the Holy Trinity which is distinctly personal and eminently unique in each of its three persons. For, as far as I have had the grace and honor to know Him, my own spirit can attest that, yes, though God is the same, one, unchanging and unchangeable, He yet still relates to man, moves, and acts on him in three unique and distinctive ways, those ways which are intended to communicate to man the salvific and sanctifying role of God in a man’s finite and brutish life. What’s more, in order for man to perceive water in its three states, each state must have some sort of external condition to influence it so as to undergo the necessary transition, namely temperature (and, I suppose, sometimes pressure too), yet God has “no one greater by whom to swear,” which is to say, He has nothing to condition Him which is beyond or more powerful than Himself, such a condition which might move or impress itself upon Him independently so that He might be compelled to change because of the will and impression of that external actor or condition. Therefore, having none greater, when promising to bless Abraham and multiply his seed, “swore by himself, saying, ‘Surely I will bless you and multiply you.’” {Heb 6:13}

God is one {Deut 6:4} yet relates to man in the way that He Himself has chosen through three distinct persons who have their own personalities, roles, duties, and functions within God’s salvific plan to present His Son a spotless bride by which to embrace and be embraced by eternally. The Father, Son, and Spirit are each the irreducible and implacable essence “God”, but each have their own specific, divine attributes by and through which God’s will is communicated, expressed, and actualized in the field of space and time. In short, there is God “the Father” who is the sovereign, invisible, and immutable Lord of all, God “the Son” who is the materiality of the Godhead known most presciently through His “suffering servanthood” which accomplished the redemptive act of humanity by condemning sin in the flesh through the crucifixion of the written law of sin and death (the written law which was His body) with all its penalties for disobedience on the cross, of which He, as God in human likeness, was raised as God by the Spirit who was released upon general humanity after the Son’s ascension but who takes up specific and personal residence as God in the hearts of His redeemed, the Spirit who is best known by His moniker “Paraclete”, the “advocate, counselor, and helper” {John 14:16, 26}; the Spirit who helps us in our weakness (i.e. our humanity), “For we do not know how we ought to pray, but the Spirit Himself intercedes for us with groans too deep for words. And He who searches our hearts knows the mind of the Spirit, because the Spirit intercedes for the saints according to the will of God. And we know that God works all things together for the good of those who love Him, who are called according to His purpose.” {Rom 8:26-28}

Though God communicates to man as Himself through three distinct personalities, with each having three separate though interconnected and mutually dependent roles, God did not choose to manifest this way simply for the benefit of man. Far from it, humanity is a creature, created in His image “far later” than He was and is and it is by that image that the creature conforms and cannot do anything but conform.

Man only reacts. He is only capable of reacting. He, in fact, does best when he does not resist the action of His Creator but simply surrenders himself, which is to say, his “wants, hopes, and will” to He in whose image he is made and of whose stuff he is composed.

“God formed man from the dust of the ground and breathed into his nostrils the breath of life, and the man became a living being.” {Gen 2:7} and, “‘In Him we live and move and have our being’… ‘For we too are his offspring’”. {Acts 17:28, emphasis mine}

Man will never be able to outrun the Image which he bears, nor will he enduringly be able to deface and profane such an image, even in light of his limitless distortions, those which are presently manifested in so-called “gender fluidity”, “transsexualism”, or even “transhumanism”.

God will not be mocked, least of all by man who believes it is his right and privilege to mock, denigrate, and “deconstruct”, if only for the sake of mockery, denigration, and deconstruction.