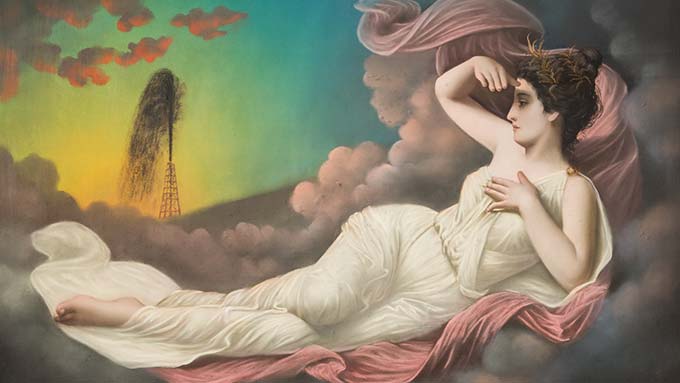 Things were not going well in the Fallon home. Teething. Aubrey, their soon-to-be one year old daughter had two molars pushing through and, evidently not bestowed with a high pain threshold, was giving William and Karen little sleep.

The walls of this damn apartment, William said before he left that morning, two hours before he usually went to work in hopes he could catch some shut-eye on the office couch before Mr. Pike, his crew chief, arrived.

It wasn’t going to happen.

You see, the couch had been there long before Fallon and his colleagues had started their lease at the Park Plaza, long before Copperhead Resources even considered the plausibility of the Guadalupe play, and God knows who had slept on the thing over the course of its lifetime or what lewd, unutterable act had been performed on the moldy rat-bitten upholstery. Thoughts alone made it nearly impossible for anyone sober to fall asleep on it, not to mention how lumpy and uncomfortable its cushions, thus, after a half hour of tossing, turning, unable to shake from his imagination the probable indecencies of its past, William Fallon arose and, begrudgingly, tried to find some work to do, knowing full well, though, there wasn’t much left.

Compared to your typical landman outfit, Fallon and his fellows had labored with unusual dedication, diligence, even cohesiveness over the last eight months. Remarkably, they’d managed to lease the majority of the thirty-square mile prospect, save for a few stubborn holdouts who were trying to negotiate more favorable terms with the oil company, a vain proposition given that every tract of unleased land was now in some way surrounded by those who had given in, the besieged thus left with little if any leverage thanks to the marvels of horizontal drilling. Copperhead’s seismographers were set to arrive the following week and, with a load that only two of the crew could handle moving forward, the fear of downsizing loomed.

But it ain’t gonna be me, Fallon reassured himself as he leaned confidently in his foldable chair, pondering his spare place of business. The office was not well looked-after, due mostly to the fact that the project could be pulled at any moment, thus why bother? There was a county appraisal map on the wall, out of date as far their current operations were concerned, and various surveys on a partition, but besides the communal box of ever-regenerative office supplies and water cooler in the corner, the place was completely spartan, in more coarse disarray – what with the black beetles and crickets, the sunflower seeds, paper scraps, dip bottles, fast food wrappers – than any working environment Fallon had ever witnessed, even forward operating bases in Iraq. Indeed, the office, the whole building needed about a week’s worth of cleaning just to make it modestly presentable to the scores of landowners who periodically stopped by. If I came in and saw this place, he often said, I’d think it totally a scam.

Perhaps it was. Mr. Pike was the only member of the team who ever communicated with Copperhead directly, and that only through email and the occasional call which Pike always took behind the building out of earshot of the crew. The head office in Wichita Falls did send down a representative now and again, but they never stayed beyond a day, using Guadalupe County mostly as a stopover for their more pressing and profitable interests further south. Each crewmember, to include Pike himself, was an independent contractor: easily expendable and relatively cheap, men who were expected to do what they were told and nothing more. None of them possessed the power to make any real decisions out in the field, a handicap that greatly hindered day to day operations, but one that made it easier for Copperhead to keep legal tabs on what vain promises those dim-witted contractors said or did in their name. From his own experience, this anonymous relationship to authority was familiar to Fallon, but the inability to make a damn decision when the moment called made him often pine for his days as a Marine – his glory days, those starry heights of his few, but passionate, years.

Standing before the aerial map of the county with the glazed expression of a tourist seeking inspiration from a work of modern art, Fallon reached out his unsteady hand and began to trace with his finger the boundaries of certain properties, reminiscing on the social nuances that plagued his dealings with each one, particularly those that hadn’t yet leased, lands shaded red. Cocksuckers, he said with a spittle as if laying a curse upon those he touched. A man always did spend eighty percent of his time on the neediest one-fifth, this particular one-fifth some of the most loathsome trash Fallon had ever met, locals who made him ashamed to be a Texan, and one who loved her countryside at that.

Next he began circling some of the green properties, suckers of a different sort, tracts he’d spent hours in the courthouse researching, writing reports on, contracting, negotiating, manipulating here and there; lands whose owners he had to stalk at times, harass, bully; others who welcomed him as a kind of savior: the oil man with bottomless pockets eager to change their lives in the most serendipitous manner one could ever wish or dream: mailbox money.

Caressing now the entirety of the dart-holed map as a heartsick lover the framed canvas of his beloved, Fallon suddenly felt his right index finger suspended above a boot-shaped property in the northeast corner of the map. It wouldn’t move away. The tract in question was a yellow one which meant that a portion of its minerals had been leased, but whose surface owner, Douglas Sutton in this case, had persistently declined Copperhead’s offer, probably because he foresaw too little money for too much grief. You see, in many cases those who thought they owned their land outright had only partial rights to that which was underneath. Some had no rights at all, had had it legally severed in many a warranty-deeds past. Quite often they were unaware, ignorant too that if the oil company successfully tracked down such-and-such heir of such-and-such reservation, and managed to convince that heir sign – which they always did, why wouldn’t they? – then the company could mutilate that particular tract however they saw fit, surface owner be damned. As one could imagine, the yellow properties were publicity nightmares if not handled with the utmost care and tact, qualities William Fallon had shown himself particularly adept since joining the team, much to his own surprise. Even he didn’t realize how heartily the fine citizens of Guadalupe City would be willing to entrust the continued viability of their cattle ranches and sorghum fields, many of which had been in the same families for generations, to a former military man who could have easily been lying about those war stories he buttered them with, nevermind the occasional scar to validate the claim.