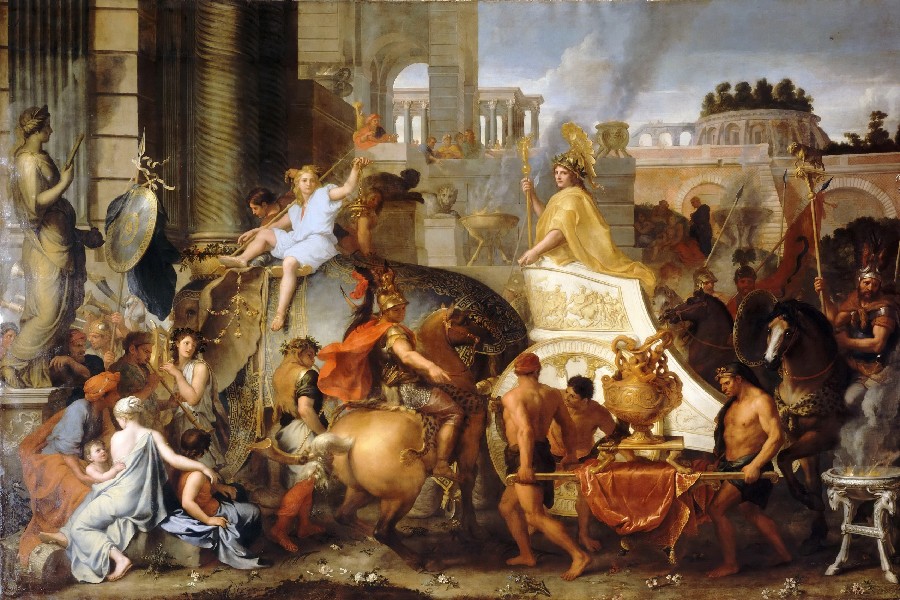 Entry of Alexander the Great into Babylon, Charles Le Brun

On rare nights when Prudence smiled, the young lieutenant, barely twenty-five, would climb to the top of the flat walled roof of the three-story mansion that kept the majority of his forty-odd Marines so that he might smoke his dying father’s cigars in blessed solitude.

Early in his tour, curfew ensured that evenings were relatively quiet and still. But as months passed and the threat of danger retreated further into the deaf-dumb desert and the regulations that his men were supposed to enforce naturally eased, Commerce began to appear: first as a single lorry that would soon spring a tail which, within a few weeks, would develop into a veritable train, one that stretched eastward all the way to dawn.

Watching the vehicles snake their anonymous wares down the shelled road that lined the north side of the patrol base toward that unhappy bridge that spanned the Euphrates before dissolving into the City, she who, even three years since her destruction, still laid as one prostrate before the stool of her conquerors, the lieutenant would squint and envision a different time, an immediate, more primordial time: that of his forefather Alexander who, with a mere thirty thousand Macedonians, severed the north from the south en route to the Lordship of Asia.

Reed boats, our man would mouth as he dreamed of a more recent age, of only a few years ago when the City was yet still beacon and guardian of the Sunni zealous and faithful. How beautiful she must have been in the spring of her prime: her minarets green as the shoots of early bulbs, her industry fecund, brimming, her riverfront homes of local chieftains the envy of all Babylon. How he longed to have been there before the fighting – for the fighting: he would’ve been her champion, her liberator, he would’ve set to sword and flame each one of her defilers, sparing not a single head from the risen stake: neither woman nor child, proud foe nor coward in flight – all deserving of wrath they who tread upon the good and sacred.

Her travails at end, our lieutenant would’ve set about restoring the City’s honor, reinstating men of character and eloquence to once again establish her upon the laws first decreed by her earliest kinsman, Hammurabi, King of the Amorites. With Justice re-enthroned on her rightful seat, wide our man would’ve flung the City’s gates to the bounty of the world, and the world to hers. All this and more he would’ve doubtless captained if Providence, in His impenetrable wisdom, would’ve ordained our man’s birth but a single year earlier, the lieutenant having missed by mere months the glorious sanctity of holy battle, his one and only birthright.

Such ostentatiousness, however, is seldom the way of our God, the Lord of Heaven and Earth divining far subtler trials for our lieutenant to suffer so that he too might be led into that wild and terrible country of Destiny, his own that would seem so alien to his fathers but would yet see him surpass each one of his fathers if, alas, he could endure it to the end; the whispers of which would visit him as soon as the tail lorry disappeared into the waking morn and his cigar cooled to bitter nub: the quiet terror of there being no more wars worth fighting, no lands worth conquering, no terrains to chart nor cities to found; no epics, no tales, no great and noble deed worthy of pursuit nor lofty or unknowable feeling to be had in the body at all anymore; and that Man, having long forsaken whatever it was the heavens entrusted to us and us alone, should – in accordance with the immutable dictates of which ignorance is no defense – be excluded from the glory of Life, our name blotted forever from the memory of the stars.