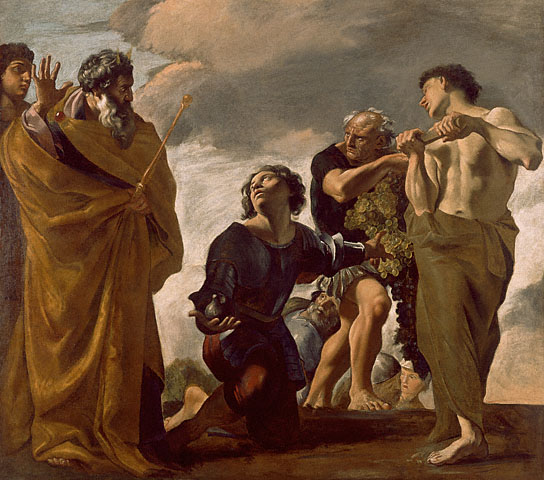 Moses and the Messengers from Canaan, Lanfranco

Hard on me
so hard
these
no-one-else-will-ever-know-nor-cans,
try though I might to make them so,
despite my faults.

Fought, have I,
the very lie of the stars to only pass them in sandy fingers through.
And what, dear Anthony, has such work profited men like we,
this solitude,
but hard and being-hard?

For all these years of many years
in desert-years,
leave me no more convinced
the truths-contained
these icy caven walls
and needled oaken floors
be better than any other full stop

No, only ravenous for more than locusts and wild honey
and beetles-dung and colors-tan and seasons-sun and wadis-dry
and wagons-pass with wares beyond mere gold and spice
of distant letter to dumb and listless kings –

– this ravenous. Indeed, so ravenous.

The so-called “truth”, or “unendurability”, of “The Real” is not what our Newtonian world-conception has for centuries lured our epistemological paradigms into lazily believing. On the contrary, The Real, far from availing itself of the easy empiricism that speaks to man at all times in and through his senses, instead appeals to that other, “higher” Sense which remains slightly “apart” and, as it were, “aloof” from the usual five; that Higher One which reacts only when compulsed by the loftiest, hardest, most nuanced, profound, terrible, and thus “inexpressible” of all sensual and linguistic inputs that the body of man is emotionally capable (and even some that it is not); “The Real” which reveals itself either through various aesthetic subtleties which typically remain indiscernible and beyond the grasp of man’s common sensibilities, or by the overwhelming grandiosity of sensual grandeur whose luminosity can only be truthfully endured by men of great and terrible feeling whose unique dispositions – vigorous, insatiable, contrary, and often maniacal – are alone able to morally transcend the easy dualism of “good” and “bad” so as to move beyond the deceptions of binary simplicity, immature reductionism, and the lame creative products which are produced when one confuses the “emotional exhaustion” one feels in the wake of awe for “deep and penetrating truth”.

It is indicative of the degree to which one is afflicted with the negative form of Nihilism – that expression which can only destroy – that a man is able to so willingly and easily give himself over to the “enjoyment” of bad (i.e. hedonistic or “popular”) art and poor story-telling; willingness that is always ready to throw off the natural aesthetic armor that a man must maintain throughout his days should he have any hope of defending himself from the polluting sentimentalities and pornographic emotionalities that so intoxicate the masses and coerce their every hence and thence; cultural “drunkenness” and the otherwise eager embrace of all that promises an infantilizing escape from the grim, unrelinquishable realities of the world which, again, is not only an expression of one’s unworthiness of the harsh standards required of a great and transcendent life but, in fact, accentuate the common man’s silent hatred of such standards and their unquenchable longing to be released and acquitted therefrom forever.

Though he may not be able to articulate it, man can instinctively perceive “good” art from “bad,” the latter which seeks not to offend man’s trivial, shallow, and often ridiculous sentiments but actually endeavors to provide such sentiments with certain moral grounds by appealing to and even promoting the most simplistic, easy, and superficial “common denominator(s)” that might insinuate man to man; bad art which, on the one hand, heralds its badness by the ease to which it appeals to the greatest number of lowly sophistications, and on the other, to how readily it is consumed, digested, assimilated, eliminated, and “excreted” by these sophistications who somehow attribute import and value to “bad art’s” trifling existence; such excrements these sophistications will unanimously consider “profound”, the elimination of which is, of course, the herd’s collective bodily process of eagerly making way for something more, newer, obvious, assimilable, unburdensome, flattering, and fattening – all to say, “better”, i.e. more grandiose and titillating.

Sensual and emotional grandiosity, untempered by certain moral severities which ultimately provide the existential structure and spiritual orientation to direct the usual indeterminacy of sensual expression, are to the common man’s aesthetic facilities as sugar, industrial fats, and pre-fabricated “meals” are to his body and senses.

The soul and spirit of the man who thus consumes “bad art” and other popular “cultural” offerings which are in every way as obscene, obese, grotesque and diseased as the body of the one who eats unending from the swill of easy and tasty calories. 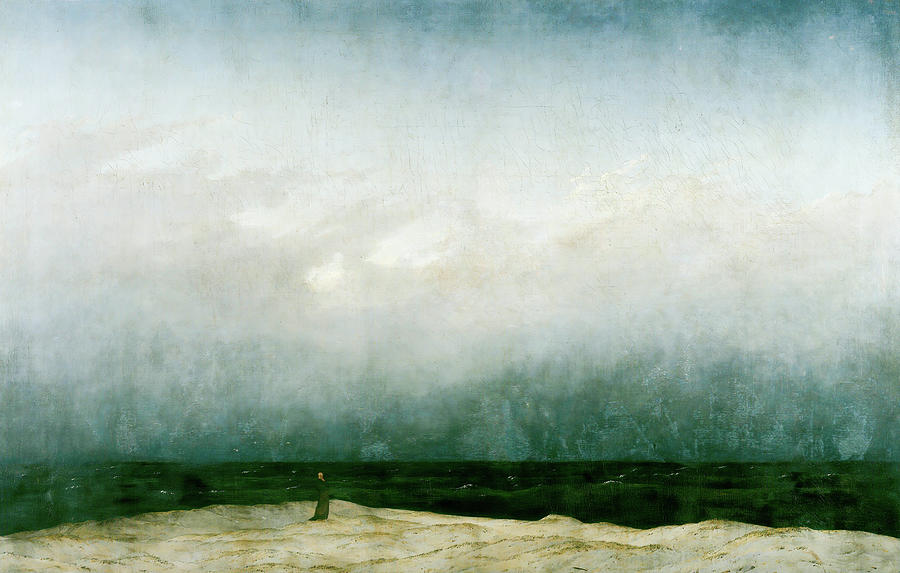 The Monk by the Sea, Caspar David Friedrich

The sole rationale for why any man would choose to continually stride upon the lonely and indeterminable frontiers of “all that might be possible” is that the sensual and, by it, cognitive and, by it, emotional gratification one inevitably feels when engaged in the creation of the kind of art that might be produced therefrom, sublime, nuanced, and subtle as it so often is; gratification which typically outweighs all other considerations of life which, when enraptured thereby, tend to dissolve, however temporarily, into inconsequence and triviality all other preoccupations that might consume his time and vital energies: his great, lofty, and impenetrable feelings – more “real” to him than anything else – which do indeed shape and mold the reality of all lesser, lower things, be they men, gods, ideas, actions, or even the “truth” of the heavens themselves.